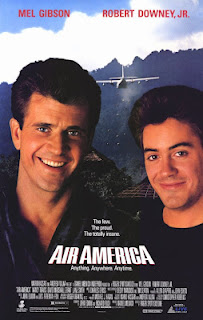 War may be a nasty business, but it’s proven a fertile ground for Hollywood.

Vietnam has been like catnip to directors allowing them earnestly highlight the horrors of war whilst incorporating crowd pleasing pyrotechnics, a groovy 60’s soundtrack and casual racism.

You’d think there weren’t many laughs in the senseless deaths of thousands of naïve soldiers and innocent civilians, but you underestimate the power of the silver screen

The movie is based on Christopher Robbins’ inside story about the secret CIA funded airline “Air America”. It provided covert logistical support to the war against the Commies. And at its peak, it was the biggest air fleet in the world.

Staffed by hell-raisers and trouble-junkies, their motto “anything, anytime, anywhere” soon referred to more than the humanitarian cargo they were supposed to be shipping for the war effort.

Robert Downey Jnr plays Billy Covington, one such wide-eyed loose cannon, lured to Laos on the promise of exotic adventure and steady work. He teams up with wily vet Gene Ryack (Mel Gibson) who takes him under his wing and shows him the clusterf*ck unfurling before them.

Turns out, the Air America boys are complicit in a CIA-backed heroin smuggling operation which finances the local anti-Communist warlord’s private army. But that’s OK ‘cos they’re the good guys. 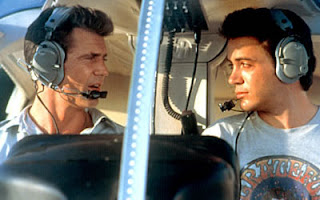 Much like the US Government’s criteria regarding entering foreign conflicts, here at EHHQ we like to bend the rules. Strictly speaking, there’s no helicopter explosion in this film. But, it would have been churlish to exclude a film awash with helicopters on a trifling matter like the absence of any pyrotechnics.

When his landing gear fails on a routine delivery, Downey crash lands his cargo plane in a remote airstrip. In an attempt to extract him from the gook-infested jungle, Gibson tries to rescue Downey in a UH-1H Huey.

The commotion enables the “hostiles” to pin-point their location who start to strafe the chopper with bullets. A shot penetrates the gearbox, causing a loss of oil pressure and for the chopper to go down quicker than Paris Hilton in a hotel lift.

The bullet-riddled chopper crashes through the tree-line, losing its tail and rotor blades - coming to rest horizontally in the bows of a tree. There’s a corny exchange of action-comedy banter between the two about who is going to jump down first. It ends with both Gibson and Downey jumping a good 100ft to the ground without so much as a twisted ankle.

Predictably as soon as they are clear of the landing zone the rest of the wreckage crashes down from the tree onto the jungle floor. 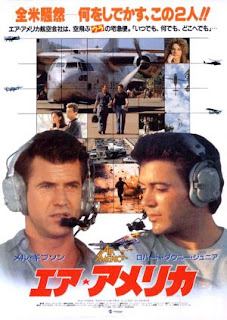 Director Roger Spottiswoode graces us with a beautifully shot film (director of photography Roger Deakins could make a ninety minute montage of turds look like 2001: A Space Odyssey) chock full of airplanes and countless helicopters.

He even has a number of expensive looking explosions scattered at important points in the film. But despite this elaborate and drawn out set piece he drops the ball big time - failing to bring these two action staples together.

There were high level talks in the team as to whether this film could even be included in these hallowed pages due to its lack of a bona fide chopper fireball. I think there is enough smoke, sparks and damage to the chopper to justify it. But only just.

I haven’t seen any type of motorised transport wedged in a tree since the Jurassic Park jeep incident. I’m pretty sure this is a helicopter first.

Yes. Going by the principle that leading men rarely, if ever, come a cropper in a chopper, both Gibson and Downey jump down and away from the falling wreckage and live to wisecrack another day.

For what is ostensibly a light-hearted action comedy, there is a surprising amount of social and political commentary hidden in the typically high octane japery.

Yes, it’s fairly superficial stuff (more M*A*S*H then All The President’s Men) but kudos to scriptwriter John Eskow for including as much pinko-loving anti war propaganda as the studios would allow.

There are some nice turns by oriental stalwart Bert Kwouk as the crooked Laotian warlord General Lu Soong and a pre-Scrubs Ken Jenkins is entertaining as hard ass Major Donald Lemond.

The film has been universally panned by all and sundry, but I quite enjoyed it.

Spottiswoode had the perfect opportunity to lay a big explosion on us when the cockpit hits the ground but he bottles it. Perhaps he had blown the budget on coke and hookers for Downey’s trailer. Inexcusable.

Also, nothing much has the appearance of 1969. It looks far too contemporary. What has the man got against long hair and sideburns?

Sean Connery and Kevin Costner were originally pencilled in for the roles of Gibson and Downey but proved too expensive. Costner would struggle to get a paper round these days.

Review by: Neon Messiah
Posted by Exploding Helicopter at 16:11