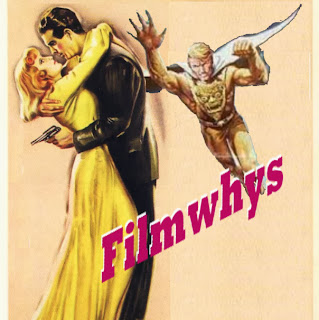 All of us know important and famous films that, for one reason or another, we've never actually seen. You know, the kind of film that when you sheepishly admit to never having watched, is met with an  incredulous, "What do you mean you haven't seen......?"

Well, Bubbawheat who runs the great Flights, Tights, and Movie Nights has decided to do something about it and start filling in the holes on his cinematic CV. Each fortnight he invites someone to introduce him to a famous film that's he's yet to see, recording the experience in his Filmwhys podcast.

Exploding Helicopter was recently a guest on Filmwhys and we took the opportunity to introduce Bubbawheat to the classic film noir Double Indemnity.

In return, Bubbawheat introduced us to The Pumaman, a low budget superhero movie considered by the esteemed users of IMDB to be the 29th worst movie ever made. Although it's not all bad, as The Pumaman does have an exploding helicopter in it. Listen to the Filmwhys episode and hear what we made of both movies.
Posted by Exploding Helicopter at 10:20