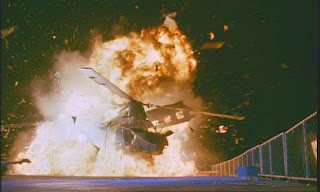 In order to catalogue the world of exploding helicopters films in all their chopper combustion glory, we recruited some of the finest writing talent around.

So, instead, let me introduce you to the only people in the world who are prepared to give up their time to help guide you through the most niche of all niche cinema genres and celebrate the art of exploding helicopters.

Jafo is the founder and editor of Exploding Helicopter. His encyclopaedic knowledge of film began as a child in the '80s when he had to accompany his father to the video shop to stop him renting films the family had already watched.

After many years forcing himself to watch difficult and awkward foreign films, Jafo realised it was OK to like undemanding genre films. Today, Jafo knows rather too much about the cinema of Steven Seagal.

Brought up on the mean streets of Tehran in the early 80’s, Neon spent his formative years playing street soccer with old vegetables. His love for helicopters started when he came across an old Sikorsky S56 which he rebuilt from scratch using poorly dubbed episodes of the A-Team.

He fled the repressive Iranian regime, travelling to Europe to pursue his dream of becoming a film reviewer for an obscure niche website. Smuggled into the UK in a consignment of kebab meat, he’s survived ever since eking out a living as a budget Antonio Banderas look-a-like at corporate functions. Peruse his other writing on his own site.

Chopper is the resident aesthete of the EH writing team (not nearly so difficult as it sounds). With a chin stroked almost to the bone by visits to challenging theatre performances and art installations, he veers generally toward the high-art end of things.

However, ‘serious’ cinema remains a difficult issue. Try as he might, Chopper can’t watch two Gauloise-smoking French people discussing existentialism against a tasteful backdrop without yearning for a spontaneous explosion.

And that’s because films should be fun. Chopper appreciates that movies are often at their best when they are raucous, ridiculous – even unremittingly stupid. When helicopters explode, in fact.

Jindy likes his films as he likes his women: dark, complex and with Gestapo uniforms. The last bit’s a joke of course. Raised in bland 1980s Northamptonshire, his formative years were influenced by Star Wars, Indiana Jones and James Bond - he makes no apologies for wishing that he had Roger Moore’s eyebrows.

Publicly, he will happily discuss his passion for classic gangster films and war epics, the comic genius of Bill Murray, and the works of Danny Boyle. Privately, and after a few beers, he might reveal his morbid fascination with the career of Danny Dyer, his love of 80s buddy cop movies and perform his impression of Ben Kingsley in ‘Sexy Beast’.

Jindy believes his life story would be best portrayed in celluloid by a young Gary Oldman. His friends would say that Alan Partridge is a better choice.

There was much media speculation when Exploding Helicopter acquired the writing talents of Boty for an undisclosed fee recently. Shrugging off advances from a number of competitor niche movie review blog sites, Boty is said to have joined the team in what we're contractually obliged to call a "fully amicable decision".

Describing his move in a recent press conference, Boty said: "I look forward to working with the Exploding Helicopter boys in an atmosphere of bland co-operation having been a fan of the site for many days now."

We're confident this bland co-operation will result in Boty fulfilling the prerequisite quota of reviews each month, as per the terms of his contract. Boty can also be found writing for movie review site Static Mass on themes not exclusive to exploding helicopters.

Despite protesting that he's not much of an 'action film guy', Joe enjoys the sight of a fiery chopper as much as the next man, but prefers those that appear in the less obvious locations - be it in films about 16th century China, genetically mutated apes, or in a brick-based children's animation. Essentially, the more unexpected the better.

When it comes to movies in general, Joe knows what he likes, and that tends to be films where Will Ferrell is not involved - as anyone who's witnessed him waste entire evenings on his personal quest to explain why Anchorman isn't the best comedy ever made will know. Joe is also a fan of Moore-era Bond, apart from the inexcusable Moonraker.

Exploding Helicopter is dedicated to Catherine Brookes who saw them first.