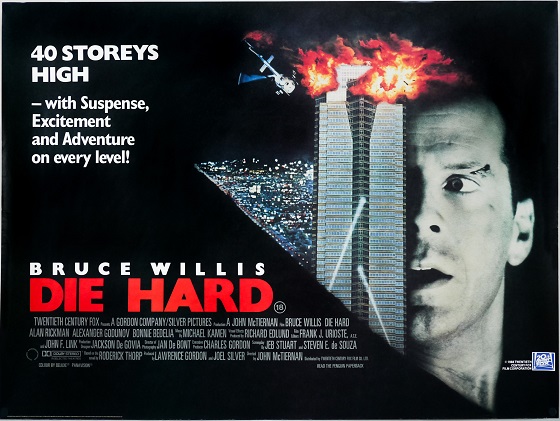 When terrorists seize control of a tower block, an FBI team led by the great pock-marked villain Robert Davi, are brought in to free the hostages.

Davi’s plan involves cutting-off the buildings power and before giving them "helicopters up the ass". Exploding Helicopter is not sure if that's possible, but it sounds anatomically awkward.

Regardless, Davi and his FBI colleague fly-in, ostensibly to evacuate the hostages, but really so they can shoot the terrorists. Unbeknownst to them, the villains have rigged the roof with explosives which are detonated, destroying the buildings upper floors and taking out the helicopter.

Robert Davi never gets to deliver “helicopters up the ass” which surely would have been an anatomical first.

First known usage of a tower block to explode a helicopter.

Disappointing. The helicopter’s explosion is overshadowed by the detonation of the tower block’s roof.

"Hey, I read the papers, I watch 60 minutes, I say to myself, these guys are professionals, they’re motivated, they’re happening. They want something. Now, personally, I don’t care about your politics. Maybe you’re pissed at the camel Jockeys, maybe it’s the Hebes, Northern Ireland, that’s none of my business. I figure, you’re here to negotiate, am I right?"

The film is based on a book by Roderick Thorpe - a sequel to a previous novel he had written called The Detective. A film of that novel was made in 1968 with Frank Sinatra.

A clause in Old Blues Eyes contract, meant Sinatra had to be given first refusal on Die Hard - despite the fact he was 73 at the time. 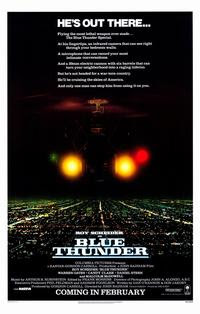 We know Scheider is a borderline nut-job as he has suffers from cool, helicopter-related Vietnam flashbacks which force him to check his sanity using his wristwatch (of all things).

Anyway, whilst flying helicopters for the LAPD's air support division, he's recruited to test a new high-tech, ultra sophisticated chopper. However, Scheider soon discovers that the state-of-the-art whirlybird is part of a high level political conspiracy.

Ultimately, his attempt to expose the secret plot leads him into a helicopter dog-fight with an old Vietnam comrade, played with icy sangfroid by Malcolm McDowell.


When Scheider's chopper malfunctions our hero looks doomed. Fortunately, he's been given a back-story that involves looping a helicopter. Before you can say "looping a helicopter is an aerodynamically impossible feat", our boy Roy has pulled a 360 allowing him to exorcise his Vietnam demons by blowing McDowell out of the sky.

One of the most satisfying helicopter explosions in cinematic history.

Scheider's aerobatic trickery makes McDowell’s copter a satisfyingly easy target. Riddled with machine gunfire it explodes whilst travelling vertically up. It’s forward momentum checked, it drops like a stone to the ground.

Scheider, in an effort to prevent the aerial power of his prototype helicopter being used for ill, lands the craft in front of an oncoming train.

For a moment it looks as if Scheider is going to be smashed to pieces along with the helicopter. However, Scheider's able to escape and we're able to enjoy watching the train languorously smash into the helicopter as Roy casually walks away from a deliciously primitive chopper fireball.

Two. A number of other helicopters are shot down throughout the film, but sadly they don’t explode.

Good. We get to see Blue Thunder explode in slow motion. The rotor blades continue to turn in a cool way.

By looping his helicopter, Scheider defies the rules of aerodynamics to blow up McDowell’s chopper. It's the only time I've seen it done in a movie.

Use of a train to explode a helicopter.

The entire film is about helicopters. What’s not to love?

Scheider turns his back on the exploding Blue Thunder in the time-honoured tradition of action heroes walking away from explosions.

When a barbecue shack is blown up, chickens are seen to rain down on the street. Apparently real chickens were used in this sequence because rubber ones would have been far more costly to use.

You can listen to the Exploding Helicopter podcast about Blue Thunder on iTunes, YourListen, Stitcher or Podomatic.

Posted by Exploding Helicopter at 17:48 No comments: 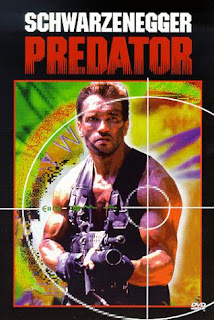 Arnold Schwarzenegger leads a team of elite, steroid inflated, troops into the jungle - accompanied by a pen-pushing CIA agent (Carl Weathers) - to rescue some soldiers who are being held captive.


After a failed attempt to rescue the hostages, Schwarzenegger and his team learn that they've been set-up by Weathers. They also learn the first rule of action films: never trust a CIA agent wearing a suit and tie.

Anyway, as they make their escape, the team find themselves hunted ruthlessly by "something like the chameleon".

Everyone dies, apart from Arnie who defeats the Predator by covering himself in mud and using advanced cub scout skills.

During the attack to rescue the hostages, Arnie converts an old broken down truck into a rolling bomb. As fighting breaks out across the enemies lair, one of the rebels attempts to make a getaway in a helicopter.

The doomed pilot flips switches inside the cockpit. As the rotor blades begin to slowly turn, Arnie steps forward and fires an RPG into the grounded whirlybird.

A nicely handled explosion. For a fraction of a second the cockpit appears to contain the entire explosion and we see the pilot momentarily writhe in the inferno.

The explosion then balloons out swallowing the machine. The rotor blades continue to turn before folding slowly towards the ground.

The scene exposes one of the limitations of helicopters as escape vehicles - when they are stationary they are utterly ineffective for swift getaways. 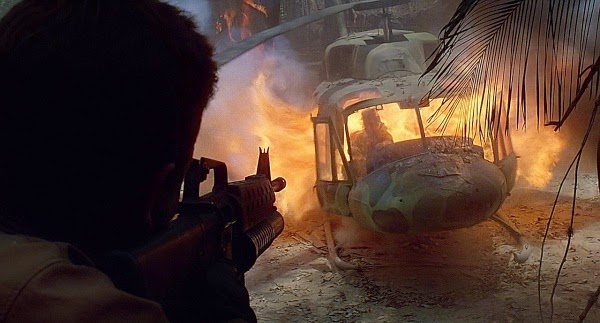 The helicopter is consumed rather than blown apart by the explosion. The pilots doomed bid to escape and the slowly turning rotor blades add a touch of elegant fatalism.

Very little. Whilst not integral to the plot the helicopter makes a brief but plausible appearance.

Helicopters play a pleasingly vital role throughout the film.

We first meet Schwarzenegger and his team arriving in a helicopter. Arnie particularly appears to savour the experience, lounging in the rear of the chopper as he languorously lights a massive cigar before getting out.

Later, Arnie’s team are flown into the jungle in a helicopter, during which we're treated to one of the greatest male bonding scenes ever filmed.

And finally, Arnie is ultimately rescued from the jungle by a helicopter after bellowing the immortal, “Get to the chopper!”

There's a lot of great helicopter related dialogue in Predator and Exploding Helicopter has actually pulled together a list of it. You can find it over on our Tumblr site.

During the film Schwarzenegger’s men find a helicopter shot down by the Predator. Unfortunately we don’t get to see this mouth-watering incident.

Jean Claude Van Damme was originally cast as the Predator. However, he quit after a couple of days filming apparently unhappy that he would only be seen in the film as a glorified special effect.

Posted by Exploding Helicopter at 18:23 2 comments: