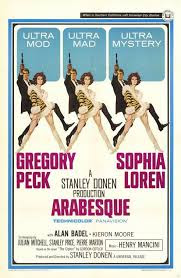 But where the first movie deftly mixed its ingredients into a delicious, light confection, Arabesque served up a congealed mess – the cinematic equivalent of school dinner mashed potatoes.

An Egyptology professor (Gregory Peck) finds himself at the centre of international intrigue after he’s hired by a mysterious Arab (Alan Badel) to decipher some hieroglyphics. (Naturally, Badel is in fact Caucasian, but absolutely nails the ‘Arab’ part thanks to some dusky make-up and a ridiculous, panto-villain accent.)

The seemingly innocent code-breaking takes a sinister turn when Badel’s girlfriend (Sophia Loren) warns Peck he’ll be murdered once he’s decoded the message. Fearing for his life, gangly Greg – whose real name was Eldred, fact fans – absconds with Loren, only to be pursued by Badel’s goons.

Admittedly, this fulsome-sounding summary scarcely covers the first 20 minutes of the film. But by common consent, Arabesque has a torturously complicated and unwieldy plot. (Greg may have solved the pharaonic riddle, but no bugger alive can work out what’s happening by Act Three.) So for the sake of brevity (and your sanity), let’s leave it there.

Suffice to say, the rest of the film involves much regulation issue double-dealing, sinister skulduggery and murderous mayhem as a bevy of unsavoury villains try to get hold of the ancient text and its secrets. And the audience tries to figure out just what the buggery is going on. 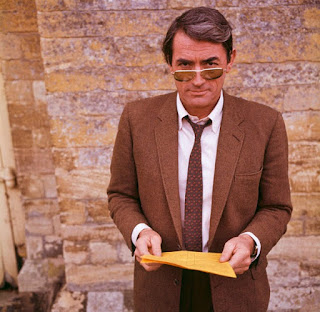 Gregory Peck plays the bookish academic who becomes unwittingly embroiled in this imbroglio. With his dark looks, formal manner and patrician air, Greg was made for austere roles that emphasised much troubled scowling and deep, introspective brooding.

But for this light-hearted caper, he’s obliged to deliver droll one-liners, engage in a whirlwind romance and insouciantly dodge danger. It is by no means a comfortable fit. Imagine Werner Herzog starring in Police Academy 7 and you’ll get the idea.

In fact, as you watch Eldred shuffle awkwardly through the film, it’s hard to not think that rascally charmer Cary Grant would have been much better for this role.

And as it happens, that’s an opinion shared by the film’s director, Stanley Donen, who’d had the part specially written for the North By Northwest star but was then unable to secure his services. Rubbing salt in the wounds, apparently dour Gregory, every time he flubbed his lines during filming (which was often), liked to remind Donen: “Remember, I’m no Cary Grant.” Ouch.

Co-starring in the film is Italian beauty Sophia Loren, widely considered one of cinema’s greatest female actors. Not that you’d know it from her Hollywood output, though.

While her European CV is full of award-winning performances in meaty, issues-led dramas, Tinseltown invariably cast her as exotic eye candy in insubstantial bits of froth. Like this movie.

Still, the role does bring one significant challenge. Because our long-legged lovely is called upon to look hopelessly smitten by fifty-something Eldred, while he awkwardly exudes all the sexual charisma of a kitchen fridge.

A puzzle, wrapped in a mystery, shrouded in a very confusing film 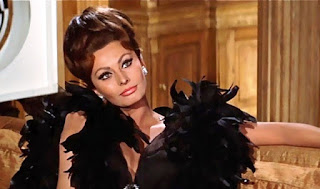 Readers who’ve made it this far (and Exploding Helicopter thanks both of you) will already have gleaned some of the reasons Arabesque doesn’t work.

The plot – and it’s hard to overstate this – is hopelessly convoluted. It’s never entirely clear what is going on, or why Peck – a fusty academic who spends his day reading dusty scrolls – continues risking life and limb to solve a mystery that neither he, or the audience, understand.

Further befuddlement is added by director Stanley Donen. In previous films, such as On The Town and Funny Face, he’d always directed in a conventional style. But he photographs Arabesque as if he’s just dropped a tab of LSD, swamping the screen with psychedelic colours, crazily angled shots or peculiar framing. It’s like totally groovy man!

Sadly, it turns out our Stanley wasn’t having a mid-life crisis or experimenting with a new style: his reasoning was entirely cynical.

After spending $400,000 dollars on script rewrites, he realised the story was still utterly incomprehensible. “Our only hope,” he confided to the film’s cinematographer, “is to make the film so visually exciting the audience never have time to work out what the hell is going on.”

Still, Arabesque does get some things right. And by that we mean the inclusion of an exploding helicopter.

During the film’s big climax. Peck and Loren are being pursued across the countryside by the villainous Badel, who’s aboard a Bell 47J Ranger with some machinegun-wielding goons.

Our heroes escape takes them to a large iron bridge that is currently undergoing repairs. They run on to the bridge while the baddies take pot-shots from the chopper swooping above.

Clambering down onto a gangway on the metallic structure, Peck finds a ladder that’s been left by maintenance workers.

As the helicopter flies underneath the bridge to make another pass, Greg drops the ladder into the whirlybird’s rotor blades. The damaged chopper spins off, before crashing into the river below and exploding.

Judged against today’s standards the scene is pretty terrible. The special effects involve the use of a very obvious model helicopter and some extremely ropey back projection. However, allowances need to be made for the fact that this is one of cinema's earliest exploding helicopters (only two films predate it, From Russian With Love and The Giant Behemoth).

There are some nice shots from inside a real helicopter showing the panicked passengers as the aircraft plummets, out of control, towards the ground. Curiously, someone decided to add in that high-pitched whining sound effect you typically get when planes crash. It’s highly doubtful that the aerodynamics of a plunging helicopter would actually generate this noise, but what the heck.

The shot of the fuselage hitting the surface of the river and breaking apart does look good. As does the fireball it generates. Weirdly, part of the wreckage appears to be on-fire and underwater at the same time. It’s a while since Exploding Helicopter took a GCSE in science, but we’re not sure that’s possible.

Only known destruction of a helicopter by a ladder.

Legendary Hollywood stuntman Vic Armstrong – listed in the Guinness Book of Records as the world's most prolific stunt man – earned his first screen credit on this film as Gregory Peck's stunt horse-riding double. But Greg did all his own worried scowling.

Still want more? Then listen to the Exploding Helicopter podcast episode on Arabesque. Listen via iTunes, Podomatic, Stitcher or YourListen.

Posted by Exploding Helicopter at 22:51 No comments: