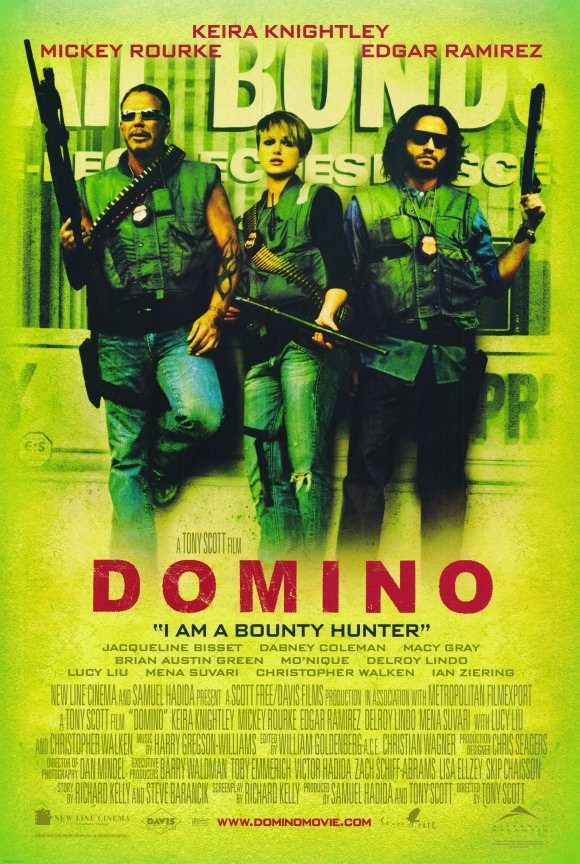 You don’t normally associate sex, drugs and violence with a Keira Knightley film. Nor, indeed, entertainment.

Typically, the straitlaced star is found in more genteel fare, giddily swooning in wholesome romantic comedies or staid period dramas. But after making her name with a slew of such sappy entertainments (Pride and Prejudice, King Arthur, Love Actually), our Keira had fallen foul of a fate more terrible than missing the debutants ball: typecasting.

Given her unblemished ‘English rose’ appearance and RADA-honed diction, Hollywood merely wanted to truss her up in a corset and have her coquettishly flirt with a succession of floppy fringed twerps. Understandably, Knightley didn’t want to spend her career playing toff totty so deliberately blasted her chaste persona with a canny act of career sabotage: Domino (2005)

The film is loosely based on the life of Hollywood l’enfant terrible Domino Harvey. The daughter of actor Laurence Harvey (The Manchurian Candidate), Domino ditched her dull Hollywood existence for the hedonistic thrill of life as a bounty hunter.

This exaggerated account of her unorthodox career sees our privileged moppet getting out of her depth in LA’s seedy underworld. After becoming unwittingly embroiled in the theft of $10m, she finds herself pursued by the Mafia and the FBI. Can she cut a deal with the mob? Can she escape arrest? Would you like more tea, Vicar? 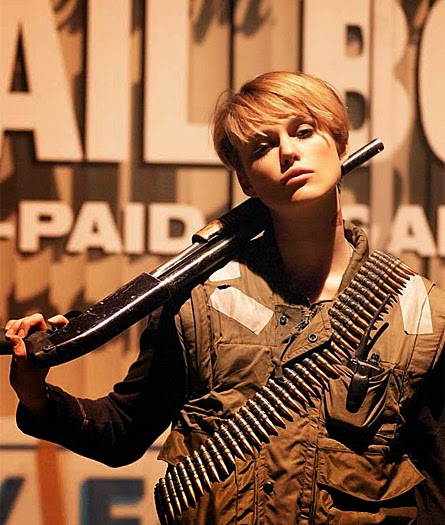 As the tattooed, chain-smoking, nunchuck-wielding bounty hunter, our Keira wastes no time in gleefully trashing her choir girl reputation. Facing down a gang of heavily armed drug dealers, she defuses the situation by performing a semi-naked lap dance. Later she coolly orders the amputation of a man’s arm before indulging in a mescaline fuelled sex romp in the Nevada desert. At no point during these scenes does she perform an adagio on the pianoforte or suggest taking a turn round the garden.

There’s a guilty pleasure in watching the normally ‘butter wouldn’t melt’ Keira getting down and dirty. And you certainly can’t fault her ‘commitment’ to the part (producers preferred euphemism for actresses getting their nellies out). Unfortunately, the plausibility of her character is punctured every time she opens her mouth.

With her cut-glass English accent and 18-carat pronunciation, La Knightley can’t quite deliver her lines with the throaty menace you’d expect of someone who tracks down violent criminals for a living. Ray Winstone, this is not. Her posh brogue renders threats like, “Listen bitch, we’ve got your fucking son. Give us the money or we’ll whack his arse” unintentionally comic. Rather than exuding fearful menace, she sounds like a crabby old Duchess, irritably complaining that the staff haven’t cut the crusts off the cucumber sandwiches again.

Unfortunately, other problems start stacking up. The chaotic storyline which is incapable of going five minutes without introducing a new sub-plot is as unsure as Madame Knightley’s performance. The film seems unable to decide whether it wants to be a biopic, action film or a critique of celebrity culture.

Story overload is compounded by sensory overload courtesy of director Tony Scott. Directing with his trademark ADHD style, the viewer is assaulted with a dizzying kaleidoscope of fidgety camerawork, fast cuts, flashbacks, and freeze-frames. And if that isn’t enough to induce a migraine, everyone’s second favourite Scott brother punctuates the action with a pointless voiceover. Adding to the confusion, said voiceover is also plastered all over the screen in caption form. By the time the exhausted viewer makes it to the end credits they’re left longing for some nice, quiet, soothing entertainment: like a Michael Bay film. 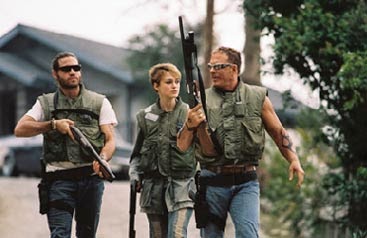 Still, this everything-and-the-kitchen-sink approach to filmmaking pays dividend for the viewer when Scott throws in an exploding helicopter.

During the film’s climax, Keira and her group of bounty hunters attempt to cut a deal with the Mob. The negotiations, which take place on the top floor of a hotel, turn sour and a three-way gun battle breaks out between the bounty hunters, the mafia and the FBI who keeping tabs on the situation from helicopters circling the building.

During the ensuing melee, one of the mafia henchman opens fire at the helicopter, killing the pilot. Without anyone controlling the chopper, it swiftly crashes to the ground and explodes.

Given the extravagance with which Scott directs the rest of the film, the helicopter explosion is a most disappointing affair. The chopper simply disappears from view, after which we hear a crash and see a big flash indicating that it’s been blown-up.

One would have thought that Tony Scott would have grasped this opportunity to create an explosive scene of operatic intensity. Instead, there’s no wreckage, no drama, no nothing.

Sadly, none to report. 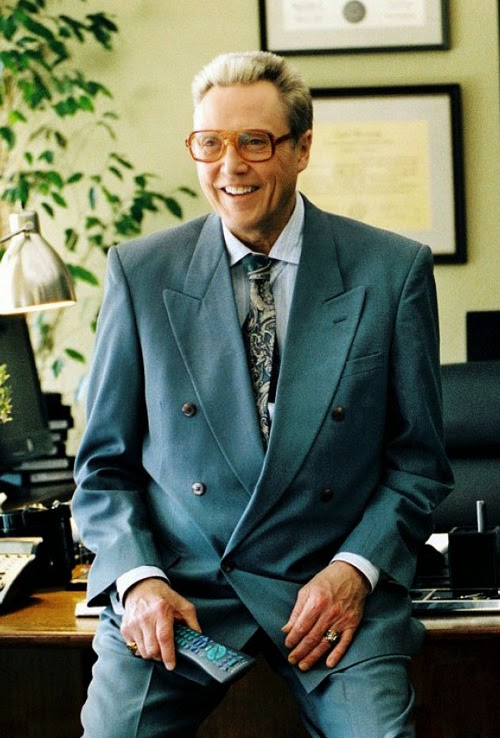 Every film is improved by the presence of Christopher Walken, and Domino proves no exception.

Cast as a fast-talking TV producer, Walken gives a performance that can only be described as Walken-esque. His idiosyncratic approach to pronunciation – where words are emphasised seemingly at random – make listening to his line readings an unalloyed joy.

Other actors can speak non-stop for half an hour without leaving an impression. Whereas Walken, in one brief interlude here, simply says “Wow” in his own peculiar syntax and steals the whole scene.

Throughout the film there’s a curious motif of a dying goldfish. Indeed, a flashback to Domino’s childhood shows her witness the unfortunate death of her fishy friend, and the adult version wears a goldfish tattoo on her neck. While hardly up there with Sophie’s Choice we’re presumably meant to ascribe some deep emotional significance to this loss of what is essentially a middling fairground prize.

Here’s another theory: many animal behaviourists believe that domestic goldfish are driven start, staring mad by going round in circles without ever getting anywhere. Having sat through this film, I may be beginning to see the significance of the motif.

“Where the fuck do you think you’re going? These people paid for a seminar.”

Look closely amid the welter of tattoos that Keira sports in the film and you’ll notice a curious reference to Blade Runner, which was directed by Tony Scott’s brother Ridley. Inked across the back of her neck is ‘Tears in the rain’ a nod to Rutger Hauer’s famous speech at the end of that film. Again, the tattoo seems to have no significance to the film, so it appears to be nothing more than an ‘in-joke’ between the two brothers. Hilarious stuff.

Review by: Jafo
Posted by Exploding Helicopter at 17:33 No comments: