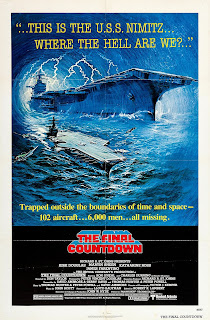 Along with death, taxes and a Meryl Streep Oscar nomination there is one more certainty in the world: mention the words ‘Final’ and ‘Countdown’ to anyone, and they will start humming: “Der-ne-ner-ner, der-ne-NE-NE-ner…”

Thanks to Eighties pop-rockers, Europe, the Final Countdown has become synonymous with poodle perms, tinny synths and a horrific, caterwauling chorus. (Which, be in no doubt, was unquestionably used as audio torture during the darkest days at Gitmo.)

But once upon a time (well, 1980 to be exact), the phrase was perhaps best known as the title of a film with an intriguing time travel premise. So come with Exploding Helicopter, as we spiral backwards through the cinematic time tunnel.

A present-day American warship is caught in a mysterious electrical storm that sends it spinning back through time to 1941 and – Cor, lummy! – the hours before the Japanese attack on Pearl Harbour.

Understandably, the ship’s patriotic captain is all for using the might of his modern-day weaponry to prevent the infamous Japanese attack. But what if – as other conscientious members of his crew point out – this might alter the course of history in unintended and unpredictable ways?

The stage then is set for some classic time-travel speculation about the consequences of America never entering World War II. Would Europe still be under the jackboot of Nazism? Could the hammer and sickle of Soviet Russia now be fluttering over the continent? Most importantly: might any combination of actions have avoided Trump? And if so, is it too late to maybe give them a shot?

Topping the bill is human dimple Kirk Douglas. The singularly-chinned thespian plays Captain Yelland, the straight-arrowed military man who has to make sense of his crew’s time-travelling travails.

Alongside him is Martin Sheen, whose main role is to sport a magnificent plume of beautifully coiffured hair, of the kind not generally seen outside a show ring at Crufts. When not tossing his lustrous locks from side to side – a move that seemingly leaves him in constant danger of a neck injury – his other job is to butt-heads with Douglas about the consequences of meddling with history.

The rest of the cast is a weirdly eclectic mish-mash of actors. There’s Superfly himself, Ron O’Neal, cult movie impresario Lloyd Kaufman and Asian utility actor Soon-Tek Oh who is cast as (hold on to your seats, folks) a kamikaze crazy Jap.

Revered character actor Charles Durning also has a role as a shady US Senator, which seems fitting as – if anyone knows about being stuck in time – it’s the prematurely aged Chuck, who has spent the majority of his forty-plus year film career playing crusty old codgers.

On one level, The Final Countdown is a terrific idea. The film’s characters have to grapple with a moral quandary centred on one of the defining moments of World War II. And with the fate of the world at stake, the drama literally couldn’t be higher.

Except. The trouble is, well, we already know how all these events played out. Clearly, everything the characters are worrying about will never come to pass – so there’s no real sense of high stakes, jeopardy nor tension.

Instead, like the aircraft carrier on which the action takes place, the drama chugs slowly and predictably forward across its 100-minute run-time. Ironically for a film about time travel, it feels an awful lot longer.

All told, it’s more the final let-down than countdown.

In order to prevent the space-time continuum being dangerously damaged, Captain Yelland orders that two characters be left stranded on a deserted island (He reasons that they’ll be rescued later, but not before they can raise the alarm about the Japanese attack on Pearl Harbour).

The pair are flown out to the isolated outcrop in a helicopter. But when one realises the plan, he grabs a flare gun and threatens the pilot. A struggle breaks out, during which the flare gun goes off, causing the helicopter to explode.

The chopper fireball is incredibly brief. It’s only on-screen for a couple of seconds before the action cuts away. You can only conclude that they were trying to hide the poverty of their special effects with such a rapid edit.

The Final Countdown is far from the only example of a time-travel exploding helicopter. Biggles: Adventures in Time (1985) and Samurai Command 1549 (2005) both feature helicopters exploding in eras where they did not belong. This movie, though, made in 1980, has the distinction of being the first one to pull off this feat.

As the copious amount of military hardware onscreen may suggest, The Final Countdown was made with the full co-operation of the American Navy.

So pleased were the Navy with the outcome, they included footage in their recruitment drives. It is unlikely, however, that any film schools felt similarly compelled to use excerpts from the movie to promote the virtues of quality movie-making.

Check out the review of The Final Countdown by our friends Bulletproof Action.
Posted by Exploding Helicopter at 16:41 3 comments: