The Siege Of Firebase Gloria 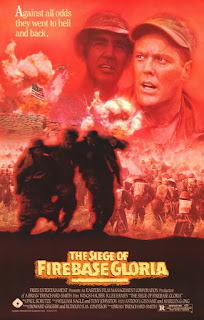 “No dumb bastard ever won a war by dying for his country,” said the notoriously blunt General George S Patton. “He won by making some other dumb bastard die for his.”

If ever a war movie embodied this famous remark, it’s The Siege Of Firebase Gloria (1989). During 99 blood-soaked minutes, we follow a small group of soldiers as they shoot, stab, garrotte and strangle a seemingly inexhaustible supply of enemy extras.

There are no stirring heroics. No rousing patriotic speeches. And certainly no examination of the conflict’s causes or consequences. Just the cold, efficient butchery skills of men killing other men. Watching it, General Patton would’ve been wiping a sentimental tear from his eye.

It’s the Vietnam War. Inevitably, a small patrol of marines are trapped behind enemy lines as the Vietcong launch a major offensive. So far, so Platoon, you might think. But if it’s jingoistic clichés and slo-mo heroics you’re after, look elsewhere. This movie ends up looking more like a military snuff tape.

The story is simplicity itself. With no other route of escape, the soldiers have to make for a remote, undermanned, and largely undefended Army outpost called Gloria.

The base is quickly surrounded by ‘Charlie’. Hopelessly outnumbered and outgunned, our heroic ‘band of brothers’ resolve to fight a desperate battle to the death. And that’s it, really. It’s not called The Siege Of Firebase Gloria for nothing.

As veterans of the Vietnam War movie genre will know, marines in these films always have to be commanded by a tough-as-nails, take-no-shit, sergeant. (Think Sean Penn in Casualties of War or Tom Berenger in the aforementioned Platoon).

And in this hallowed gang of men, no actor has shown more nail-hardiness – nor more firmly refused ordure of any kind– than that grizzled, mean, king of ornery: R Lee Ermey. (Of course, it helps that Ermey actually was a bona fide sergeant back in ‘nam – he served in ‘the Corp’ for 11 years – before finding fame with a film-stealing turn in Stanley Kubrick’s Full Metal Jacket.)

And that’s the difference, really. Good as Sean Penn was in Casualties of War, you know that between scenes he was probably sat in a penthouse trailer holding conference calls about endangered pandas with the Dalai Lama and Bono, or screaming for an espresso with the sugar stirred anti-clockwise NOW!

But when Ermey delivered his memorably foul-mouthed turn as drill instructor Sergeant Hartman in Kubrick’s Eighties classic, he wasn’t even really acting. He merely reprised the parade ground bollockings he’d dished out to thousands of raw recruits. (Trivia fact: Ermey actually wrote or improvised his own dialogue in the film).

Since then old R. Lee has, with military discipline, reprised his trademark boggle-eyed shouting and swearing shtick in more than 100 films (much like Al Pacino, only without the Oscars and critical plaudits). And true to form, in Firebase Gloria the perma-enraged sergeant regularly unleashes an ungodly amount of guttural insults at decibel-shattering volume.

But it gets even better. Also in the cast is Wings Hauser, the cult star of such straight-to-video classics as The Art Of Dying, Reason To Die and L.A Bounty, as Ermey’s gung-ho – and ever so slightly unhinged – second in command.

Throughout the film, Wings displays a worrying enthusiasm for machine-gunning ‘dinks’ (as they’re charmingly referred to) at every opportunity. It’s meant to portray patriotic fervour, but more readily suggests an urgent need for psychiatric care.

With thousands of kill-crazy gooks launching relentless assaults, the situation for Ermey and his dwindling group of troops couldn’t be grimmer. Morale and ammunition are in equally short supply. 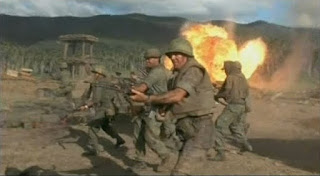 Recognising this moment of crisis, Ermey realises that a rousing pep talk is needed. An inspirational cri de Coeur that will stiffen the resolve of his wavering men. Perhaps something akin to the stirring poetry of the ‘Once more unto the breach’ speech from Shakespeare’s Henry V.

Or of course, he could just scream and bawl about how shit they all are while holding on to the severed heads of two of their fallen comrades, dangling from his fingers like some ghastly giant’s testicles.

“Anyone know who these belong to?” asks the puce-faced sergeant, swinging the freshly hewn noggins of the two now very much ex-marines.

“This is Corporal Miller,” he continues. “He’s dead. I don’t have any respect for Corporal Miller anymore, because he allowed his troops to relax. They let their guard down for five fucking minutes, and Charlie took advantage. Look at ‘em, goddamnit. Stay alert, stay alive. It’s as simple as that.”

Now, Exploding Helicopter is no expert on such matters but it’s a fair guess the above probably wasn’t delivered in iambic pentameter. But then again, when did Shakespeare’s plays ever serve up a flame-challenged whirlybird? Speaking of which…

So, the exploding helicopter. Early in the film, the good sergeant’s squad are being flown in a chopper towards the Gloria firebase. As they approach to land, they come under machinegun fire from hidden VC soldiers. The pilot is killed forcing Ermey, ever the take-charge guy, to land the damaged whirlybird.

The prospect of imminent chopper conflagration satisfaction is signalled when someone yells: “I can smell fuel.” Everyone is ordered out, and as they jump clear the helicopter explodes. Kaboom.

This is a glorious helicopter explosion. It doesn’t look like any expense was spared on the pyrotechnics. The fireball is truly huge and features the kind of rich, orangey hues that only come from burning a considerable amount of gasoline.

Clearly impressed by his own special effect, the director treats us to multiple replays of the explosion. It’s a fireball feast for the eyes.

R Lee Ermey obviously gets the choicest bits of dialogue in this movie, and gets to deliver this particular gem in his own inimitable way: “It’s time to sprinkle some shit on Charlie’s rice.”

Review by: Jafo
Posted by Exploding Helicopter at 15:53 No comments: