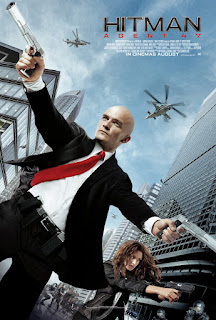 How do you make a movie based on a computer game seem authentic?

That was the problem facing the creative geniuses behind Hitman: Agent 47 (2015). But after much scratching of heads (and very probably some industrial-level coke consumption), they hit upon an ingenious, albeit counter-intuitive, solution.

Why not take the glaring limitations of computer games – two-dimensional characters, hopelessly complicated storylines and no real emotional involvement – and instil those very qualities into the film itself?

The result is Hitman: Agent 47 – a movie it can feel uncomfortable to watch without a PlayStation controller in your hand.

Our protagonist is ‘47’, a genetically enhanced super-soldier or ‘agent’, created as part of a now defunct Government experiment. He’s out to stop a shadowy group called The Syndicate, who (natch) want to revive the Agent programme for their own nefarious purposes.

As is very often the case in such movies, there’s a reluctant, beardy scientist (named Litvenko) who’s now rueful of the destructive programme he created and so has gone on the run. That means both sides are Looking for Litvenko, which sounds like a middling Russian rom-com and might actually have made for a more interesting movie.

The hunt leads to the missing boffin’s daughter, who is also trying to track down her errant father. Inevitably, Baldy ’47 and the chick team up. Can they find the secretive scientist before the sinister Syndicate? Will they be able to prevent the reboot of the agent programme? And do you get 10,000 bonus points for shooting two baddies with a single bullet? (Sorry, we forgot this isn’t a game for a moment.)

The titular hero is played by Rupert Friend (taking over from Timothy Olyphant who played the cue ball-headed assassin in the previous film). Although not nearly so robo-handsome as Tim, Rupert is fine in the role – but then again, this this has to be the easiest thesping gig on the planet. As a genetic kill-machine, Agent 47 is utterly incapable of expressing any sense of character, nuance or emotion. Looking back, it’s a miracle Keanu Reeves wasn’t bagged for the role.

Taking on the villain role is the slightly other-worldly Zachary Quinto, best known for playing Spock in the Star Trek re-boot movies. Now, Quinto is very much an odd bird. There’s such a strange, alien quality to his performance that it’s like watching a Vulcan straining a little too hard to play a human. Still, his peculiar nature is weirdly suited to this video game movie, and he proves an interesting antagonist for Friend to butt heads – and fists, and feet, and bullets, and blades – with.

Rounding out the cast is Ciarin Hinds, playing the much sought-after beardy scientist. As a seasoned veteran of many genuinely good films – Munich, There Will Be Blood etc – Big C clearly had mortgage payments in mind when taking this job, and his post-it-in performance reflects that.

It's not all bad

Any bozo could tell that this movie is based on a computer game. The endless scenes of frantic running and shooting – a smorgasbord of unrelenting action – carry all the hallmarks of a typical first-person shoot-em-up game.

So on the surface, this obviously does meet the standards of a truly terrible movie. And certainly, the critics who pilloried its arrival in cinemas thought as much. (“Uniquely boring”, “an idiotic mess” and “utterly banal” were among the warmer verdicts.) But actually – and whisper this gently, dear reader – Exploding Helicopter quite enjoyed it.

For all its myriad flaws, the film has a number of deftly choreographed action set-pieces (an escape from an underground car park, and a subway chase are particular highlights), and the imaginative locations lend the movie the superior gloss of a Bond film.

There’s also a neat plot switcheroo at the end of the first act. And oddly, there are even a couple of decently written scenes that give the characters a smattering more depth than the usual paddling pool dimensions found in similar fare.

Overall, there is a freshness to the fromage on display here. And so long as your expectations are properly calibrated, this is not a difficult film to enjoy.

Despite the despairing efforts of 47, the film’s denouement sees the Syndicate capture Litvenko. They spirit him away on board a helicopter as our follically-challenged assassin looks on.

However, there’s a surprise in store for the villain. As he revels in his success, Litvenko – who the film has already established is suffering from a lung condition – triggers an explosive he’s hidden inside his ever-present inhaler. Kaboom! The helicopter explodes. What a cunning wheeze!

In an interesting twist on the usual chopper fireball scene, the helicopter crumples inwards as it explodes. Burning wreckage, illuminated against the night sky, then artfully falls towards the ground. Nice.

Unsurprisingly, this is almost certainly the first time a cinematic helicopter has been destroyed by an asthma inhaler.

“Your number’s up.” Geddit? Not that there’s really that much to get.

Review by: Jafo
Posted by Exploding Helicopter at 14:18 No comments: