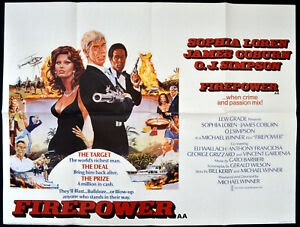 For a man so famous for being a film director, he really didn’t make very many famous films. These days, if anyone remembers him at all, it’s as a notoriously waspish restaurant critic or a smug-faced presence in car insurance commercials.

But never let it be said that this blog is afraid of terrible movie-making. Throwing any notion of quality control to the wind, Exploding Helicopter has dived into one of the dustier corners of the Winner cinematic canon, so you don’t have to.

And so we present the bonkers, twisty, unforgettable-but-not-in-a-good way thriller: Firepower (1979).

Sitting comfortably? Good. Now, maybe pop a couple of paracetamols before reading on…

This insanely confusing story begins when a scientist is killed by an explosion in his laboratory. His widow (Sophia Loren: yes, that Sophia Loren) is convinced that the untimely death is the work of a crooked industrialist, called Stegman.

Sultry Sophia turns to the FBI for help, but they’re unable to act since Stegman is living on a Caribbean island with no extradition laws. Faced with such an administrative challenge, the Feds do what any reasonable law enforcement organisation might do: employ a shady mafia boss (Eli Wallach) to kidnap Mr Big and spirit him back to the US on their behalf.

So far, so sensible, right? But we’re only getting started... Next, the mafia don calls up a retired hitman (James Coburn) to carry out the killing. And the contract killer’s first step is to recruit his secret identical twin brother – also played by James Coburn. At this point, you’re barely ten minutes into the film, and the layers of bunkum and confusion just continue to multiply and sprawl. Half an hour in, Exploding Helicopter needed to have a nice lie-down on the sofa.

Over two very long hours, the film hits you with an unrelenting barrage of double-crosses, secret identities and hidden agendas. You’re left with the sense that nobody in the film really has the faintest clue what’s going on – and if they do, they certainly didn’t tell Michael Winner.

Befitting a film that’s so all over the shop, the cast is an eclectic jumble of famous actors, familiar faces, and ‘what the hell are they doing in this?’ cameos.

Topping the bill is lanky-limbed leading man, James Coburn and Euro-cinema royalty, Sophia Loren. They’re both fine actors, but as an onscreen pairing they have all the easy rapport and natural chemistry of breakfast telly’s Piers Morgan and Susannah Reid.

Alongside them, there’s a rogue’s gallery of character and bit-part actors including the aforementioned Eli Wallach, Vincent Gardenia (Death Wish) and Dominic ‘Junior Soprano’ Chianese. Bringing a further positive, rosy glow to the proceedings is OJ Simpson who, as per usual, murders his lines with the same alacrity with which he reputedly murdered his own wife. (Fun fact: for some reason, Simpson seems to appear with puzzling regularity in films where helicopters explode.)

Anyone not already dizzy from this pick n’ mix bag of job-hungry thesps will surely be knocked out (pun very much intended) by the appearance of legendary boxer, Jake La Motta. As a villain’s henchman, the original Raging Bull turns in a performance so woefully inadequate that you’ll be wishing for one of his roundhouse punches just to get it all over with.

Finally, as a ridiculous cherry on the top, Fifties Hollywood beefcake Victor Mature wanders in from a busy retirement on the golf course to half-heartedly appear in a solitary scene. Less hole-in-one: more one-scene-and-gone.

With such an impenetrable plot and a dog’s breakfast of a cast, Michael Winner would seem a potentially fatal choice to direct this (or frankly any) film.

Boasting a filmmaking style variously described as “crass”, “primitive” and “suitable for people who like to slow down at traffic accidents”, Bolshie Mike might appear singularly ill-equipped to salvage this project. And yet, it’s his blunderbuss approach that prevents Firepower from being a total disaster.

With nothing to be gained from engaging with the material, the reliably artless Winner simply ignores it. Instead, he simply stuffs the film with a dizzying kaleidoscope of car chases, gun fights and exotic locations – all meant to distract you from the fact that the whole thing is unfathomable guff.

And should any viewers find the movie’s sensory assault and lack of narrative sense a bit much, just remember the immortal words of its late director: ‘Calm down, dear.’ Firepower may not make a lick of sense, but it doesn’t lack for spectacle – and it’s certainly never boring.

After kidnapping the Mr Big Industrialist, Coburn makes his getaway pursued by the villains’ henchmen. (Incidentally, by this point it seems utterly unclear which of the ‘twin’ brothers Coburn is meant to be playing, not least to Michael Winner.)

Luckily, Old Longshanks (or his twin) has anticipated the baddies’ pursuit plans, and cannily placed a series of time-delayed bombs in their vehicles. One of them, as you can doubtless surmise, is a helicopter.

A hectic chase ensures, and after a few minutes one of the bombs reliably detonates and puts paid to a pursuing car. But that still leaves a helicopter buzzing ominously overhead and a small posse of horse-riding heavies on Coburn’s trail.

The villains close in and it looks like it’s about to get sticky for Big Jim. Fortunately, with contrived good fortune, the chopper chooses that very moment to blow up. And if that wasn’t lucky enough, the falling debris knocks out the henchmen on horseback. It’s like three cherries lining up on a one-armed bandit.

We get an all too brief shot of the helicopter blowing up, although blowing apart would be a more accurate description. The combusting chopper is clearly an Airfix-quality model, and there’s a noticeable lack of actual fire – though predictably the whole thing is engulfed in blazing flames by the time it crashes to the ground. Having said that, continuity is the least of this film’s problems.

Apparently, the script for Firepower started life as a Dirty Harry sequel. Clint Eastwood can consider himself very lucky, punk, that he never got embroiled in such a ghastly, giddy mess.

Posted by Exploding Helicopter at 17:28 No comments: