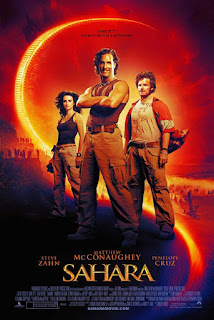 You take a best-selling novel, hire some big-name actors, sprinkle on a few hundred millions dollars’ worth of special effects and exotic locations…and hey, presto!

This seemingly fool-proof formula has produced some cripplingly bad movies over the years. And right up there, in the very top tier of infamy, sits Sahara (2005).

Few films have failed so magnificently, on such a grand scale, and for such a duration as this cataclysmically terrible piece of cinematic guff. It almost re-wrote the rule book on how spectacularly wrong moviemaking can go. (Time Magazine calculated the studio lost nearly $150 million, making it the fourth most costly failure of all-time.)

Not only was it a box office catastrophe: the film also spawned a famously venal, seven-year legal battle as the author and studio tried to pin the blame on each other. After spanking away an impressive $20m in legal fees, the case collapsed in a legal stalemate without anyone collecting a dollar. Oh, hum.

Dirk Pitt, an adventurer and naval salvage expert, goes in search of a ship from the American Civil War that went missing while carrying millions in gold.

His hunt takes him to Mali in Africa, which is currently in the middle of its own civil war. Along the way, Pitt falls in with a United Nations doctor who’s trying to find the source of a mystery illness that is killing hundreds of people.

Will Pitt find his missing treasure? Can the good doctor stop the deadly disease? Will anyone be able to explain why an American Civil War ship – you know, one of those things that travels on water – is smack-bang in the middle of the largest, driest landmass on the planet? Don’t count on it.

Matthew McConaughey plays aquatic adventurer, Dirk Pitt. Today, the Texan drawler is best known for his Oscar-winning dramatic roles – but during the Noughties, he was stuck on a treadmill of dire romantic comedies. Tired of cooing coyly at female co-stars, Sahara was supposedly Buff Matt’s big opportunity to recast himself as an action lead. (His previous attempt, dragon yawn-fest Reign of Fire, had gone up in flames.) But after the film bombed Matty Mac had to starve himself to death in Dallas Buyers Club before Hollywood took him serious as an actor.

Penelope Cruz plays the do-gooding doctor. Despite lauded roles in critically acclaimed European films, Hollywood has only ever used the Spanish siren as exotic eye candy. Here, she does little more than spout exposition, get periodically rescued and maintain immaculately glossy hair.

Bulking out the cast are a pay cheque-collecting William H Macy (hey, those university fees for his daughter don’t pay themselves) and Exploding Helicopter fave, Delroy Lindo. Always a reliable supporting turn, Del Boy has racked up an impressive number of films – Domino, The Last Castle, Broken Arrow – featuring some form of chopper conflagration.

Hindsight is a wonderful thing, but one has to wonder whether Clive Cussler’s blockbuster novels were ever ideal material for a film. Even the books’ biggest fans would concede that their credulity-stretching plots – Atlantis discoveries, Mayan death cults – are bat-shit crazy.

Compounding matters was the notoriously curmudgeonly Cussler himself. Scarred by an earlier, botched adaptation of his work, the novelist demanded – and got – final script approval. Worse, he insisted that all the loopier elements of his story should remain intact.

No less than eight writers tried to make sense of the novelist’s hokum, but curmudgeonly Clive refused to accept any script version that didn’t have every one of his bonkers notions present and correct. Finally, with filming set to commence, the producers simply stopped answering his calls and shot their preferred script. Cue the legal battle…

Given that Sahara was an expensive, effects-laden film, with big-name stars, extensive location shoots, and a dog’s breakfast of a script, the film desperately needed a veteran director.

You know the type: a grizzled tyro who could stride about the set, bullwhip in one hand, megaphone in the other, and knock the thing into shape through sheer force of personality.

So naturally, the directorial reins were handed to first-time – yes, that’s first-time – filmmaker Breck Eisner. Obviously, young Breck won this film-making gig purely on merit. But it probably was nice that he could also get regular visits on set from his dad, Disney head honcho Michael Eisner.

After locating the missing 150-year-old battleship, McConaughey and company find themselves in a sticky spot when the film’s villain turns up in a helicopter gunship. Scrabbling around inside the rusty vessel, they – let’s say, yes, improbably – find a working onboard cannon.

Boom! The cannonball crashes through the windscreen of the helicopter – and for a moment, it seems as though that’s the only damage it’s going to cause. But then a small fuse burns down and the iron projectile detonates.

This scene is really the only reason to watch this film. That, and Penelope Cruz’s immaculately maintained glossy hair.

It goes without saying that you don’t often see helicopters destroyed by 19th century weaponry. Certainly, this is the only time a whirlybird has been blown up with a cannon.

In 1980, media mogul Sir Lew Grade splurged millions on the soggy sea adventure Raise The Titanic, which sank faster at the box office than did the titular ship.  Later, the uber-producer wryly observed that rather than Raise The Titanic it would have been cheaper to lower the Atlantic.

Still want more? Then check out the Exploding Helicopter podcast episode on Sahara. You can listen via iTunes, Spotify, Acast, Stitcher or right here and now...

Posted by Exploding Helicopter at 12:45 No comments: