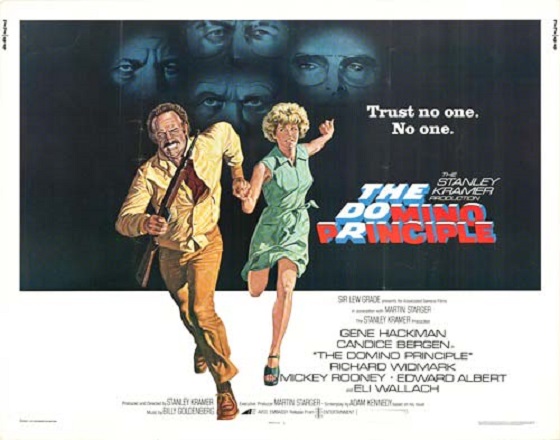 Over the years, Exploding Helicopter has seen a good few baffling movies (Memento), some incomprehensible ones (Terence Malick’s Tree Of Life) and a special handful that seem to operate entirely within their own parallel continuum of logic. (Step forward, Ron Howard’s insane papal-nuke-thriller, Angels & Demons.)

But it turns out these movies were actually models of storytelling clarity, at least in comparison to one infamous work. For there is one particular Seventies conspiracy thriller so bonkers, so defiantly opaque, that it has earned a special place in Exploding Helicopter’s Cryptic Cinema Hall of Infamy. Ladies and gentlemen: meet The Domino Principle (1977).

Why even bother with this one? you’re probably not asking. And true, on one level, reviewing such a famously impenetrable mess of a movie may seem like asking for punishment. But when you’ve spent a decade only cataloguing films where helicopters blow up in strange and often unconvincing ways, you get to know a thing or two about fruitless endeavors.

Former army sharp-shooter Roy Tucker (Gene Hackman) is quietly serving out a lengthy prison sentence when he gets a visit from two mysterious men.

They offer to arrange his escape, reunite him with his wife, and set him up with a new life in another country. Only – and maybe step back and take a deep breath, here – there’s a catch.

In return for his freedom, Tucker must agree to carry out an unspecified job. (And for the sake of simplicity, let’s just clarify now that it’s an assassination.) Obviously, our judicious jailbird is initially reluctant to accept the enigmatic deal, but eventually agrees.

So far, so kind-of-clear, right? But not so fast: at this point, the whole situation (and the movie itself) quickly starts to spin out of control. And if you’re wondering how it all turns out, join the queue.

There’s a reason this movie has baffled audiences for over 40 years. And by the time you finish reading this review, chances are you’ll also be scratching your head and reaching for the paracetamol.

The great and grizzly Gene Hackman plays Tucker. Always a compelling screen presence, Big Gene lends his character the intense, coiled rage that is the hallmark of his best work (The French Connection, Unforgiven). But as ever, the question is: just how much ‘acting’ is the famously combustible Hackman actually doing?

Famous for chewing out directors (he once commanded fey indie darling Wes Anderson to ‘pull up his trousers and act like a man’) and public brawling (even administering one beat-down at the ripe old age of 82), it’s probably fair to say Hackman could start a fight in an empty room – and still claim the other, non-existent guy started it.

And fittingly for such a bizarre film, there’s a queasy cameo from a Hollywood star of old, Mickey Rooney. The pint-sized actor came to fame in the Thirties, as a child starring opposite a pig-tailed Judy Garland in a string of wholesome musicals.

Viewers with fond memories of those golden-era offerings will therefore be more than a little perturbed by his appearance here. Cast as Hackman’s foul-mouthed cellmate, he gleefully lusts after teenage girls while continuously picking at his chest hair. No wonder Hackman decided to escape.

Why is The Domino Principle such an obtuse film? Some context might help here. The film was part of a cycle of conspiracy thrillers that emerged in the early Seventies.

But coming in the wake of a wave of increasingly complex and twisty classics – such as The Parallax View, All The Presidents Men and The Conversation – the producers were clearly worried. How do you surprise an audience now used to the idea of shadowy cabals of men with nebulous agendas undermining, overthrowing, or bending governments to their will?

In retrospect, their answer was simplicity itself: just never explain the conspiracy.

That’s right. Instead of learning, over the course of the film, the identities, motives or aims of the main players, here, the audience learns precisely nothing. Zip. Zero. Zilch. When the curtain comes down, the viewer is just as confused as they were 20 minutes in when their headache first started forming.

So, to recap: we never find out who Gene Hackman had to kill. We don’t know why they needed to be killed. We have no idea who is behind the conspiracy. And even Wallach and Widmark, the front-men for the mysterious murder plot, don’t know the answers. As they’re at pains to point out during the film: they’re just cogs in the machine. It’s not their job to know.

No doubt, the producers were initially delighted with their own cunning. What could be cleverer than a conspiracy so vast and complex that no one involved – including the actors, the director and the poor audience – ever understands it? That’d be, like, totally radical man!

Er, no it wouldn’t. Actually – and Exploding Helicopter can’t emphasise this enough – it’d be blood-boilingly annoying.

Imagine a stand-up comedian telling a long-winded joke, then walking off stage just before the punchline. A cordon bleu chef painstakingly preparing a beautiful meal before your eyes, then flipping it into the bin. A Scooby Doo episode where at the end, the whole gang simply says, “Nah, we dunno who did it’, and drives off.

The whole point of a mystery movie is that it gets solved at the end. But not this one. The Domino Principle is all conspiracy and no thriller. Ultimately, the real mystery is how this piece of cinematic bobbins got made.

While the overall film may miss the target, it at least hits the bullseye with its exploding helicopter.

The action occurs after the big hit. Hackman escapes the scene in a helicopter, flying a short distance before landing and transferring to a getaway car.

To cover their tracks, a waiting villain throws a very fetching leather briefcase inside the chopper. But this is clearly no ordinary piece of luggage, because everyone suddenly starts running and a few seconds later the helicopter explodes. Kaboom!

We’re big fans of this chopper fireball. The eruption of flame is spectacular, and wreckage is impressively flung through the air.

One particularly striking aspect is just how close the actors are to the pyrotechnics. They’re only a few feet away when chopper blows up. In fact, they look to be in real danger of being horribly maimed by flying shrapnel.

Such is the apparent disregard for the safety of the cast, it’s worth considering whether there was a cock-up in the timing of the detonation. Or maybe Hackman had managed to piss off the crew so much that, by this point, they were literally trying to kill him. Probably the latter.

The method of destruction here is unusual, but not unique. A helicopter was blown up by a bomb disguised as a piece of luggage in Diamonds Are Forever.

“I felt sorry for the actors wasted on such a stupid script…but I felt sorrier for myself for having to sit through it.” Ruth Batchelor, LA Free Press

Gene Hackman is Hollywood’s emperor of bad career choices and his “I’ll take the money” approach to filmmaking is to thank for his appearance here. Roles in Jaws, One Flew Over the Cuckoos Nest, and Close Encounters of the Third Kind were among the many better films he snubbed in order to make this slice of cinematic merde, simply because the paycheck was bigger.

Still want more? Then check out the Exploding Helicopter podcast episode on The Domino Principle. Listen via iTunes, Spotify, Acast, Stitcher or wherever you get your pods. Alternatively, just hit play below...

Posted by Exploding Helicopter at 18:43 No comments: