The Park Is Mine 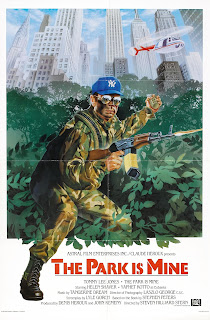 And little wonder. The Park Is Mine (1986), which was originally made for Canadian TV, is a curious wee turkey. At first glance, this tale of a ‘Nam soldier going on a violent rampage after being pushed too far looks like just another one of the Rambo rip-offs that plagued the Eighties.

But wipe away its camouflage paint-smeared exterior and you’ll find a far, far weirder film. Because in this movie, the loon-eyed shouty guy with a bag of explosives is presented not as a violence-crazed domestic terrorist, but a public folk hero.

And if you’re already confused, there’s bad news on the way: we’ve not even reached the plot yet.

So, using a secret weapons cache (natch!), Mitch does exactly that. And when he also fends off a counter-offensive by the NYPD, the public takes to the streets in his support for some reason that is not immediately clear, possibly even to the film’s director.

Humiliated by this scenario, the dastardly NY deputy mayor secretly orders two mercenaries to kill Mitch. But Mitch instead bumps off the mercenaries, then gives himself up to the police.

At no stage is the question of what the point was of the whole exercise even remotely addressed.

This is confusing stuff, certainly, but unfortunately it’s not in the least dramatic. You see, in order to retain the audience’s sympathy, the film refuses to let Mitch actually hurt anyone. Remember, kids: he’s fighting ‘the man’, not individual people.

So incredibly, the grizzled vet effects a wholesale paramilitary takeover of Central Park using nothing more lethal than blank ammunition and smoke bombs. (Exactly how the assembled might of the NYPD fails to notice this is just another baffling element that’s never explained.)

Talking of unsolved mysteries, the film also never really explains quite what Mitch is protesting against or campaigning for. What’s more, he’s only threatening to stay in the park for three days, until Veterans’ Day, so it’s always evident that the whole situation could be peacefully resolved by simply doing nothing.

Heaping confusion onto unlikelihood, the film gradually veers farther and farther away from a realistic scenario. Like one of the fake bombs used in the takeover, it splutters ineffectually before finally fizzling out.

Tommy Lee Jones was almost 50 before The Fugitive made him ‘Tommy Lee Jones’, the movie star. Before then, the baggy-eyed Texan spent 20 years slogging his way through bit parts and dreck-ish TV movies such as this.

It’s a testament to TLJ’s future greatness that he’s able to at least partially humanise such a thinly written character as Mitch and make him in half-way sympathetic. The only other familiar face the great Yaphet Kotto (Alien, Live And Let Die), playing a policeman drafted in to handle the crisis.

Speaking of no drama… About halfway through the movie, police snipers in a helicopter are ordered to fly over the park and take out Tommy Lee Jones. Our Rambo-impersonating hero fires at them, but very pointedly only aims only at the chopper’s tail rotor, damaging the whirlybird.

Trailing smoke, the damaged helicopter spins around in the air before making an emergency landing. All the crew jumps out to safety long before the aircraft suddenly combusts.

While there’s a spectacular fireball to enjoy, its impact is defused by the yawn-worthy staging. The helicopter crew takes an absolute age to safely disembark – you’ll see faster exiting in an episode of On The Buses – and only then can the pyrotechnics supervisor trigger the explosion. And frankly, a stationary and empty helicopter explosion isn’t all that interesting to watch.

“I have a message for New York. Central Park is mine.”