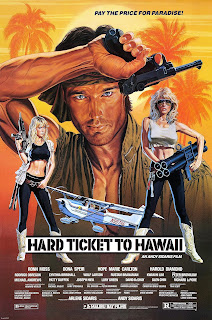 B-movies have a long and - let’s be honest - not terribly noble Hollywood history.

Invariably cheaply produced, these films endeavour to make up for what they lack in big name stars, expensive sets and well-crafted drama by giving audiences plenty of ‘good bits’ (ie: sex and violence)

Many enterprising filmmakers, from Roger Corman to Russ Meyer, have made a lucrative living by following a simple formula – rustle up any old guff, but remember to throw in enough breasts, punch-ups and explosions to keep audiences distracted. Then in the Eighties, maverick moviemaker Andy Sidaris ramped up the stakes by re-inventing the genre.

His films concentrated on giving the audience three simple pleasures: bullets, bombs and babes. And so was born the ‘triple B’ or ‘BBB’ movie.

On a remote Hawaiian island, two undercover government agents accidentally stumble upon a diamond smuggling operation and confiscate the contraband.

Unsurprisingly, the local criminal kingpin is not best pleased and sends his heavies to retrieve the sparkles before police reinforcements arrive.

Meanwhile, in a sub-plot seemingly unrelated to the rest of the film (and totally unrelated to any notion of credibility), a radioactive killer snake – yes, you read that right – is loose on the island. The wee guy pops up in an early scene then slithers away for over an hour, emerging only at the denouement (from a toilet, naturally) to bite the baddie.

So, can our heroes slap cuffs on the crook before they’re killed off? What say might the sinister serpent have in proceedings? And most importantly, will the viewer get to gorge on plenty of guns, girls and good bits? You bet. 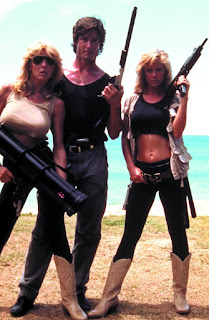 So, who was Andy Sidaris? For many years, he was an award-winning sports television director, covering everything from the Olympics to American football. Famously, he pioneered the ‘honey shot’, the now ubiquitous cutaway to an attractive woman in the crowd.

But Andy ultimately grew tired of sports and relaunched himself as a DIY filmmaker, self-producing a dozen straight-to-video films during the Eighties and Nineties. His signature ‘BBB’ formula is literally all over the screen in Hard Ticket To Hawaii, which is chock full of gun battles, blow-ups and blown-up breasts.

As writer, director and producer (and probably chief bottle washer) on his movies, Sidaris had no-one to stop him indulging the wackier elements of his imagination. For example: he liked to fill his movies with beefcake guys and buxom dames. So what if they couldn’t really act? That’s what he wanted, goddammit!

He was also known for putting together notably bonkers action scenes. In this movie, our heroes fight-off a skateboarding-riding assassin before using a bazooka to blow up a sex doll. Then they decapitate someone with an explosive frisbee. You don’t get that in a Chuck Norris movie.

But what about the babes?

Here too, Hard Ticket To Hawaii delivers. All the leading ladies in the film are played by Playboy playmates (March 1984, May 1984, July 1985, and October 1985, for you vintage pornography fans out there). They may not be the greatest actors in the world, but you can’t fault the other *ahem* assets they bring to the production.

And the funny thing is, it all kind of works. No-one is ever going to mistake this movie for high art, but it does make for a rollicking piece of entertainment. If you’re looking for a film with plenty of ‘good bits’, you won’t go wrong with this.

Talking of good bits, what of the exploding helicopter action? Fittingly, it combines both a babe and a bazooka.

As the action nears its end, a couple of villains attempt to escape in a helicopter. Exchanging gunfire with our heroes as the chopper lifts-off, it looks like the baddies may make a successful getaway. But wait! One of our undercover cuties has brought along a bazooka.

Dressed only in a skimpy bikini, she lines up the whirlybird in her sights and blows the helicopter out of the sky.

The method and execution of this chopper fireball is very standard, but Exploding Helicopter did derive an unexpected amount of pleasure from the sight of a beautiful, buxom woman, brandishing a bazooka. One to raise at the next therapy session…

To get to paradise, they’ll have to go through hell.

Still want more? Then check out the Exploding Helicopter podcast episode about Hard Ticket To Hawaii. Listen via iTunes, Acast, Stitcher, Spotify and all good podcatchers.

Posted by Exploding Helicopter at 21:50 No comments: