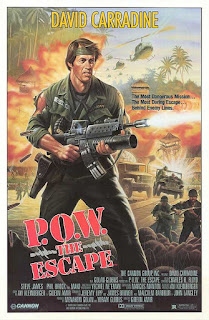 Historians will tell you that the Vietnam War ended in 1975. And technically, that’s true. But in the Philippines, the conflict kind-of-continued to rage long into the Eighties.

That’s because enterprising B-movie producers discovered that the exotic, forest-strewn country made for an ideal Vietnam substitute – the perfect place to knock-out cheapo, straight-to-video versions of Apocalypse Now and The Deer Hunter.

The Philippines had everything they needed: plentiful jungle locations, a ready supply of locals who could be passed off as Vietnamese extras, and a government happy to hire out its military to any filmmaker with a suitcase of dosh. (The fact that that the country’s President was the fabulously corrupt Ferdinand Marcos was presumably just a coincidence.)

Ultimately, this happy confluence of circumstances spawned – without exaggeration – hundreds of ‘Nam-sploitation movies during the Eighties. And they included: POW – The Escape (1986).

The Gawd-loving US Army detects an evil Vietcong prison camp that’s holding American POWs. Hell, no! Their answer: send in swarthy Colonel James Cooper, to say things like ‘We have eyes on the package’ and effect an immediate extraction of the caged heroes. So far, so impressive. Only thing is, much like Uncle Sam’s participation in the actual conflict, the rescue plan quickly goes utterly tits up.

Fast forward a scene, and Cooper now finds himself imprisoned in the very same hellhole as the soldiers he was supposed to be liberating. Like, d’oh.

So, will the brave Colonel simply spend the rest of the war crying and eating beetles in the ‘Hanoi Hilton’? Or will he be able to make a sneaky escape from Vietcong’s clutches? It’s a total mystery. If only there was a clue in the title… 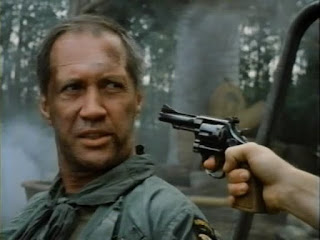 Courageous Colonel Cooper is played by David Carradine. The Kill Bill star, once captured, is tied-up and thrown into a bamboo cage. It’s all meant to break the spirit of the foreign invader. But as we know from the actor’s sad demise by auto-asphyxiation, our Dave actually rather enjoyed being painfully trussed-up in a cramped space. He probably wrote that scene himself.

Alongside Carradine, B-movie fan favourite Steve James (American Ninja, The Delta Force, McBain) appears as an escape-hungry prisoner. Big Steve has never been in imminent danger of winning an Oscar, but his larger-than-life persona adds welcome energy to the screen.

Also making an appearance in this movie is – quelle surprise! – Asian utility actor Mako. Japanese by birth, Mako was the man Hollywood called whenever they needed someone ‘oriental’. Over the years he played characters from China, Tibet, Singapore, Vietnam and even, radically, Japan.

Filipino war movie aficionados also have a chance here to spot the legendary bit-part actor, James Gaines. “Who he?” you ask. Well, Gaines was one of a number of Philippines-based Americans who ended up accidentally falling into an acting career.

Here’s the thing: filmmakers shooting in the Filippino jungle perennially needed western faces to bulk out their casts. So Gaines and a handful of other loafers – despite having no appreciable acting ability and precious little motivation – gradually became a sort of impromptu stock company for ‘Nam-sploitation movies. The ‘Slack Pack’, for want of a better phrase.

Billed simply as ‘prisoner of war #5’, this was just one of six films Gaines made that year – with such edifying titles as Dog Tags, Strike Commando, Jungle Rats, and Commando Invasion.

Working at a similar pace throughout the Eighties, it’s probably fair to say that Big Jim saw more action in Vietnam than those poor buggers who actually fought in the war.

War, huh, what is it good for?

“War: what is it good for?” asked soul legend Edwin Starr in his famous Vietnam protest song.

“Absolutely nuthin’” was his conclusion. But in this case, it’d be fairer to say: a no more than reasonable level of entertainment. (Which admittedly, isn’t as catchy).

POW – The Escape is a deeply average film. It’s so middle of the road it should have white lines painted on it. Sure, there are plenty of gun battles and exploding huts (a trusted ‘Nam staple), and the acting is fine. But there’s nothing to lift the film out of its foxhole of utter averageness.

Realising that the raid on the POW camp has gone wrong, David Carradine and his men attempt to ‘get to da choppa’ © and make their escape. Unfortunately, one of the Vietnamese soldiers is packing a rocket launcher. Charlie takes aim at the aircraft and “bazookas” it out of the sky. Bullesye!

Helicopter lovers will be relieved to know that no real helicopters were harmed in the making of this film. A bit of trick editing – which is actually rather decently done - switches the shot between the airborne chopper and an impressively large fireball.

Exploding Helicopter particularly liked the way debris, including a couple of unconvincing dummies, were incorporated into the explosion.

The sequence is given a poignant finale with David Carradine getting to gaze forlornly at the whirlybird wreckage.

Danny Glover may have immortalised the line a year later in Lethal Weapon. But David Carradine gets there first, wearily mumbling: “I’m getting to old for this shit”.

Check out the review of P.O.W - The Escape by our friends Comeuppance Reviews
Posted by Exploding Helicopter at 17:02 No comments: