The Cat From Outer Space 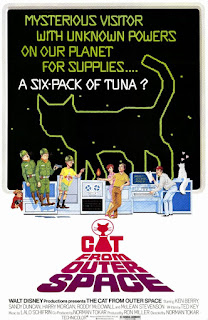 You probably won’t remember this, but in the late Seventies Disney coughed up a huge, cinematic fur ball.

Cineastes like to portray the Disney story as one long, unspooling reel of movie success. And certainly, for generations now – from Fantasia to Jungle Book to Toy Story and right up to Frozen – the studio has served up many cast-iron hits that will endure.

But study their back catalogue carefully and you’ll soon find that not every movie is a hidden gem. The Seventies, in particular, was a very tough time. After creepy old Walt died (and, according to legend, was stuffed in a cryogenic chamber, like a billionaire deep-frozen pizza) the wheels rather came off the Disney bus for quite a few years.

Bad decisions were made, and bad movies were the result.

Suddenly, the studio that had always been associated with a singular mouse became famous for a multitude of turkeys. And for a prime example of the kind of hokum Mickey’s men served up, look no further than The Cat From Outer Space (1978).

When his spaceship malfunctions an extra-terrestrial, with the appearance of a domestic cat, crash lands on Earth.

In order to repair his craft, the interstellar feline – who happens to have telekinetic powers - enlists the help of a friendly earthling.

But the Martian moggy’s task is complicated by the US army who seize his spacecraft and begin a hunt for the alien invader.

So, can the cosmonautic cat return safely to space? Or will it be captured, forcibly interrogated and subjected to horrific, vivisectional experiments by a secretive military intelligence unit?

Of course, Exploding Helicopter would never dream of spoiling the ending for you. But given this is a Disney kids’ film, one can be reasonably confident that the movie doesn’t close on a shot of the puss’ surgically-opened ribcage. 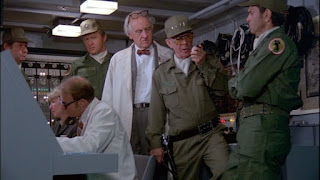 The cast provides an early indication that this film is made by a studio executives not entirely at the top of their game. Without an encyclopaedic knowledge of American television in the Seventies you’d be hard pushed to recognise the main actors. But there are a few more famous names among the players.

Harry Morgan plays General Stilton, the gruff, order-barking army man tasked with hunting down the titular cat. Best known as the avuncular Colonel Potter in the legendary and long-running comedy MASH, Morgan appears to relish the opportunity to play against type.

The mellifluous voiced Roddy McDowell (Planet of the Apes and its many sequels) also turns up as a saboteur seeking to snag the alien’s technology for his evil boss. Now, our Roderick was always an entertaining and playful performer, and it takes a special talent to drag a bad performance out of him – but this movie manages it.

The poor lad is utterly wasted in a small and woefully underwritten role. (It’s worth noting that he managed to convey much more emotion in the Apes movies, and that was with two pounds of monkey-plastic hanging off his face.)

There’s also a part for James Hampton. While the name may not be familiar, his perennially genial face certainly will be. Seemingly born into the world as a middle-aged suburban dad, he enjoyed a long career in family-friendly television programmes. Though he is perhaps best known to film fans as Michael J Fox’s father, and fellow lupine, in Eighties favourite Teen Wolf.

From Walt Disney to Walt Dismal

So, how did Disney become so dismal?

After old Walt shuffled off to that great Iceland freezer in the sky (well, Los Angeles) in 1966, the company became gripped by a terrifying artistic malaise. Robbed of their creative catalyst, the studio’s output increasingly came to lack the spark with which it had made its name. (Who remembers, or for that matter has ever heard of, Napoleon and Samantha, Run Cougar Run, or Ride A Wild Pony?)

There’s an overwhelming sense of safe choices and pulled punches. And those traits are on painful display here.

Consider the film’s premise: stranded alien befriends human. It’s loaded with possibilities. Just look at what Steven Spielberg did with it in E.T a few year later.

But where the bearded boy wonder gave us a deft blend of drama, comedy and pathos, The Cat From Outer Space gives us feeble wordplay, lamentable slapstick, and shoddy spectacle. The whole enterprise is so lacking in inspiration it doubtless had Walt spinning in his grave (or cryogenic tube, assuming you believe the rumours).

Given the torpor that pervades the rest of the film, it’s not surprising to find that the exploding helicopter action is similarly underwhelming. 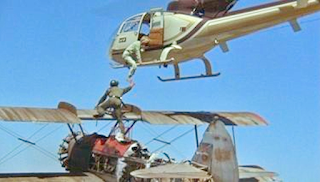 Late in the film, the real villains turn out to a group of industrial saboteurs who want to seize the alien’s technology. When their plan fails they take a female hostage and try to escape in a helicopter (a Sud Aviation SA 341G Gazelle for all you rotor-bladed geeks out there).

For unknown reasons, the chopper suffers a malfunction that will only let it fly straight line. Unable to steer the aircraft, the bad guys don parachutes and jump out, leaving the damsel in distress to her fate. It's then up to the psychic powered feline to save her.

Using an old biplane the whiskered world traveller effects a thrilling mid-air rescue where the woman has to climb down from the Gazelle into the biplane. The pilotless copter finally sputters, goes into a spiral and disappears behind a hilltop where it explodes off-screen.

It’s a damning moment. When a film can’t even be bothered to blow up a helicopter, you know you’re in trouble.

While there’s some fun and novelty to be had from watching the fixed-wing and rotor-bladed aircraft carryout an airborne joust, this good work is undone by the explosion. Or rather the complete lack of one.

Having a helicopter disappear from view before blowing-up is a directorial cheat Exploding Helicopter is sadly all too familiar with. But here, we reach a new low.

Most embarrassed auteurs would have had the good grace to send a plume of smoke skyward or give us a shot of the wreckage as token indicator that the whirlybird has been destroyed. But whether through a lack of budget, imagination or both, the director leaves the work to the sound effects – dubbing a generic explosion noise onto the soundtrack. Pathetic.

The aerial duel between helicopter and biplane is quite good. There’s some genuinely impressive stunt work as a couple of professional daredevils clamber around the outside of the helicopter and biplane. But for a better example of a dogfight between these two craft you’d be much better off watching Capricorn One which oddly came out in the same year.

First know destruction of a helicopter involving a cat with telekinetic powers.

Sadly, the film’s funniest joke is actually its tagline. The actually quite amusing: “Close encounters of the ‘furred’ kind.”

Review by: Jafo
Posted by Exploding Helicopter at 16:42 2 comments: