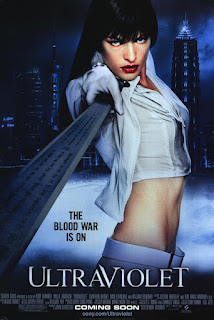 The Resident Evil franchise may have made Milla Jovovich the queen of mid-budget science-fiction films, but even she can’t save this truly abysmal futuristic vampire flick.
Normally, we’d begin with a brief plot synopsis. Unfortunately, the confused array of sequences which collectively comprise Ultraviolet (2006) defy coherent summary. At least the story, whatever it is, provides Ms Jovovich with plenty of opportunities to wear tight-fitting clothing and expose her perfectly toned mid-riff, so it’s not all bad.
Let’s fast-forward to our primary interest in the film: the exploding helicopter. During one of the substandard, Matrix-inspired action sequences, Jovovich jumps on a motorcycle to escape a pursuing helicopter.
Riding directly up the side of a skyscraper – the laws of physics have no function in this film – she evades a heavy bombardment of machinegun fire. As the helicopter’s gunner runs out of ammunition, Jovovich halts her flight before turning round and racing towards the chopper as the gunner tries desperately to reload.
Milla roars off the top of the building through the open sides of the helicopter. As she passes through the chopper she shoots the pilot and gunner dead, before crashing through into another building. Behind her, the helicopter explodes for an indeterminate reason.
Artistic merit
The undoubted highlight of this dumpster fire of a film. It’s spectacular, innovative and very cool. Even if the CGI is rather shoddy.
Exploding helicopter innovation
A similar scene can be seen in the low budget Filipino action Final Score (1986). In that film, the hero drops a grenade into the helicopter’s cockpit as he rides through the fuselage.
Interesting fact
Director Kurt Wimmer disowned the film after it was re-edited by the studio who cut out 30 minutes of footage.

Still want more? Then check out the Exploding Helicopter podcast on Ultraviolet. Listen via iTunes, Podomatic, Stitcher, and Acast.