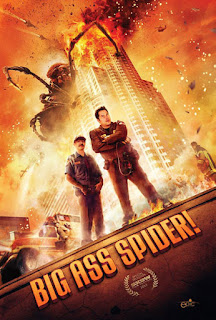 Big Ass Spider is the moving tale of a young Yiddish girl struggling with her own sexual awakening in a nineteenth century Polish village beset by stringent gender codes.

Okay, no it’s not. It’s a big dollop of crass, in-yer-face, made-for-cable, creature-feature mayhem. A film in which a vaguely convincing CGI spider performs all kinds of merry anarchy, while indulging every monster movie cliché on the list.

Our heroes, it turns out, are a cross-cultural comedy pairing. The film takes place, inevitably, in downtown Los Angeles. There’s even a King Kong-lite showdown atop a tower. And before you ask, yes, there is a scene where lots of pneumatic bikini-clad women run (and bounce) away in terror from the angry arachnid.

Exploding Helicopter won’t spend too much time explaining what happens in Big Ass Spider (2013). Anyone who has already seen one of the plethora of giant-sized creature movies (where, as a rule, the only small components are the budget and the leading men’s resumes) will already know what kind of intellectual territory we’re in.

So, the only sensible questions to ask are: can Big Ass Spider spin a diverting yarn? Will you be caught up in a densely woven web of thrills? And does the story have enough legs?

Near-future Earth has been hit by a global food crisis. We’re all doomed! Faced with global catastrophe, scientists attempt to solve the extinction-level threat by combining a sample of extra-terrestrial DNA with…a tomato. I’m sorry: a what with a what?

(Presumably, the scriptwriter was on the wacky baccy while writing this particular scene. Or he had guessed, correctly, that the demographic audience for his film wouldn’t be paying a blind bit of notice until the big, hairy spider came along.)

As it turns out, the boffins’ grand plans to create a super-salad go disastrously wrong when a spider is accidentally caught up in the experiment.

Infused with Martian genetic code, the eight-legged mutant quickly grows to a prodigious size and begins a homicidal rampage across Los Angeles.

With the web-weaving menace running amok, the fate of the city falls to two unlikely heroes: a jovial pest-exterminator and a wise-cracking hospital security guard. Their mission, as one of them pithily summarises, is to: “Stop the spider, save the city, kiss the girl.”

Greg Grunberg, who looks very much like Ben Affleck’s tubby older brother – a Fat Man to his Batman, if you like – plays the bug killer ‘ordinaire’. You'll probably remember Big Greg best from his role as the powerful telepath in Heroes, where he used his mental powers to solve murders and order free burgers (or something).

A specialist in lovable everyman characters, Grunberg is perfectly cast as the ordinary Joe who unexpectedly finds his inner Superman when confronted with the big bug crisis.

He’s thrown together with Lombardo Boyar’s fast-talking Mexican security guard. With his goofy antics and an accent as broad as a burrito, Boyar veers dangerously close to racist cliché: a sort of Hispanic Jar-Jar Binks in human form.

This not-so-dynamic duo sounds as good an idea as, well, melding tomatoes with E.T. But, in the finest traditions of odd couple movies (see just about any Eighties buddy cop movie), their friction-filled relationship proves to be the film’s most entertaining aspect.

Adding a much needed touch of class to proceedings is stern-faced character actor Ray Wise (Robocop, Twin Peaks). A specialist in authoritarian roles, he’s spent the last thirty years profitably playing Sheriffs, Senators and other representatives of officialdom whilst scarcely ageing a day.

Unfailingly perma-tanned and with a spookily unchanging hairstyle (only Robert Redford possesses a similarly time-resistant barnet) our Ray could still pass for late forties despite the fact he’s now pushing 70.

Sadly, the same cannot be said for the Sundance Kid, whose face these days seems to be crumpling like a decaying peach. (Which reminds Exploding Helicopter of David Hockney’s priceless observation while painting the wrinkly poet, W.H. Auden: ‘I just kept thinking: if that’s his face, what must his balls look like?’)

Despite the predictable plot, shaky special effects, and some decidedly questionable science, Big Ass Spider is a thoroughly likeable piece of hokum.

That’s because, like other notable monster successes such as Eight-Legged Freaks and Slither, this film knows that it’s meant to be good fun. And for the most part, it really is a hoot. There’s genuine wit in Grunberg and Boyar’s good-natured bickering, while the grisly deaths are entertainingly engineered. And overall, the genre tropes are embraced with a deft blend of humour and homage. Which is by no means as easy as it looks – just ask Snakes on a Plane.

Sure, you can pick Big Ass Spider apart. But that would make you rather like a mean-spirited kid pulling the legs off a helpless insect. This whimsical yarn isn’t doing any harm, so why be cruel? It’s only meant to be a piece of trashy fun. The best bet is to just sit back and enjoy it.

In a teaser for the climactic scene, the film opens with the giant arachnid atop a skyscraper in downtown Los Angeles as heavily-armed Army helicopters hover nearby.

The choppers should be in no danger. But as Exploding Helicopter has observed many times before, cinematic pilots have a curious inability to remain at a safe distance from a clearly observable threat.

Within seconds, one of the Apache-style helicopters inexplicably flies within swatting distance of the giant spider. The irritated insect smacks the aircraft with one its hairy legs, sending the whirlybird crashing into the building where it promptly explodes.

The helicopter and its explosion are rendered in fairly decent CGI. The scene is shot from below, which allows the flaming wreckage to fall towards the camera – always a nice touch.

This blog has seen helicopters destroyed by all sorts of weird and not-so-wonderful creatures – piranhas, crocodiles, bees and even, most bizarrely, flamingos. But this is the first recorded example of a helicopter being destroyed by a spider – mutant or otherwise.

Fittingly, given the title of the film, the titular arachnid is ultimately destroyed by our heroes firing a bazooka up its backside.

This allows for the apt payoff line: “Up yours.”

The movie's DVD cover blurb – which describes an annoying little insect bloated to massive proportions by unlikely circumstances, then raging havoc across the USA – led some to initially assume it was a Donald Trump biopic. No, it didn’t. But would anything surprise you about America at the moment?

Review by: Jafo
Posted by Exploding Helicopter at 22:02 No comments: