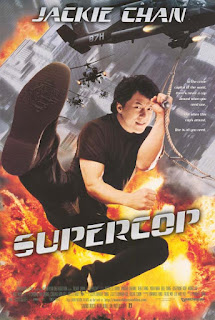 Highly strung and unreliable, actors turn up late, say the wrong lines, have furious rows with other cast members and whinge about not being able to ‘find’ their character.

Unquestionably, directors have it tough. But even still, let’s spare a special thought for poor Stanley Tong, the man responsible for ensuring Jackie Chan made it to the end of Police Story 3 with an intact pulse.

Because troublesome as they are, most actors tend not to end scenes with actual teeth kicked in, eyebrow bones broken, arms slashed by real swords that were meant to be blunted, or broken vertabraes.

Your general thesp almost certainly will not get all the skin burned off their hands by sliding 80 feet down an electrified pole. And you can almost guarantee they won’t dislocate their pelvis: an injury considered medically impossible until Jackie gamely sported the look.

Nor (Exploding Helicopter’s personal favourite) is your run-of-the-mill board-treader likely to sustain an impact so hard during filming that part of their skull cracks and shoots up into the brain, necessitating eight hours of surgery.

Welcome to the world of making a Jackie Chan movie. Please check your health insurance.

At the height of his powers in the mid-Eighties, Jackie Chan wrote, directed, and starred in a pair of chop-socky cop thrillers, the imaginatively titled Police Story and Police Story 2.

While those films were high on kung fu action and slapstick comedy, they were sadly low on budget and exploding helicopters.

But when the martial arts maestro returned for a third film, he sought to correct those flaws in spectacular style. Police Story 3: Supercop (1992) is an altogether more ambitious film.

The shanty town settings of the previous films are gone, replaced with an action story that sweeps through Hong Kong, China, Thailand and Malaysia. The series’ trademark stunts have been pushed to even crazier, death-defying levels. And chopper fireball fans finally get the whirlybird pyrotechnics they’ve so desperately craved.

Chan Ka-Kui works for the Royal Hong Kong Police Force. But don’t make the mistake of thinking he’s an ordinary cop. Oh, no: despite being about four foot two and wearing a smiley, slightly vacant expression, he's a ‘supercop’.

This, after all, is the man who previously used his bare hands to chop crime syndicates in two and deal a death blow to terrorism. (That he also sustained an impressive laundry list of real-life serious injuries, breaks and concussions while filming these heroics is, of course, quite incidental.)

So when the Hong Kong police launch a joint operation with China to take down an international drug cartel, Ka-Kui is the only man for the job. And he really is the only man, because Ka-Kui’s partner from the Chinese police is a woman. (I know: they’ll be letting them vote next).

Jackie Chan returns to the role of Chan Ka-Kui (or ‘Kevin’ if you’re watching the dubbed version).

Given the higher budget, Wee Jackie decided to also ramp up the almost-certain-death quotient of his showpiece stunts for this movie. But weirdly, the shoot turned out to be pretty quiet by his standards. He only suffered a broken shoulder, fractured rib, deep bruise on his back and dislocated cheek bone. The big softy. 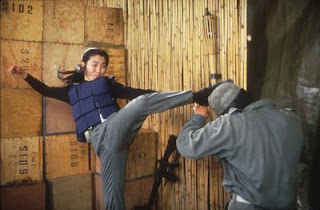 Michelle Yeoh plays the Chinese police inspector partnered with Chan to crack the case. Typically, this type of team-up would see our hastily thrown together heroes irritate each other to breaking point, before suddenly realising they actually fancy each other daft and bumping uglies.

This, though, is more of a chaste affair. While there’s some playful banter between the two leads, their relationship remains strictly professional and plutonic.

All of which stands in stark contrast to Yeoh’s experience a few years later, when she signed up to fight crime alongside 007.

In Tomorrow Never Dies, the unfortunate Yeoh was subjected to the amorous attentions of Pierce Brosnan, then in the midst of turning the Bond character into a spy equivalent of that pervy uncle at a wedding who clasps all the teenaged bridesmaids too tightly round the waist: ‘My, how you’ve grown’.

(And never forget: Tomorrow Never Dies also features the old Oirish smoothie archly delivering the sub-Carry On film groaner: “You always were a cunning linguist.) Still, while the Bond/Yeoh coupling was as unnecessary as it was inevitable, at least old Brozzer was knobbing someone vaguely his own age for once.

Mercifully, in Supercop, Chan is kept too busy kicking literally every other male character in the goolies to stop for a snog. And that means Yeoh – not to mention the viewer – is spared any leering one-liners and crude innuendo.

Was this a sequel too far?

The first two instalments of Police Story were comparatively low-budget affairs which relied on Chan’s chop-socky prowess and gift for light comedy to sell the package to viewers. This time, though, it’s all about the action.

From the destruction of a military camp in Thailand to a high-octane chase through the streets (and skies) of Kuala Lumpur, all the set-pieces are ambitiously staged and executed. And the finale, which sees Chan and Yeoh really, truly battling villains atop a speeding train – no CGI bollix here – is rightly hailed a classic.

(Just watch the outtakes at the end to see how insanely dangerous this sequence was for the actors to film. There’s a surreal scene where wee Jackie starts to genuinely fall off the hurtling train, only to be grabbed in the nick of time by one of his ‘baddie’ co-stars. The wee man just raises his eyebrows and giggles, as if to say ‘Wot larks!’ instead of ‘Jesus-Fucking-Christ-I-was-a-split-second-from-being-decapitated-there’.)

The introduction of Michelle Yeoh’s character also gave the film a new dimension. Intelligent and professional, her Inspector Yang character contrasts nicely with Chan’s well-meaning, but slightly tittish Ka-Kui. As a Chinese philosopher might observe, Chan is the Yin to her….. well, you get the idea.

While Supercop boasts more explosive action than a Chinese New Year fireworks display, it comes at the expense of the roustabout comedy that had previously given the franchise so much of its charm.

In the first two movies, Ka-Kui’s dysfunctional relationships with his superiors (and his perennially-wronged girlfriend) were always good for a corny guffaw or two. But cramming in all that action has obviously left precious little room for light-hearted banter and as a result all the talky scenes have a stilted, perfunctory air.

Most disappointingly still, the movie’s villains – previously a rich seam of derisory incompetence and slapstick tomfoolery – are here played straight as a die. And dull as dishwater.

With Chan and Yeoh closing in on the roof of a tall building, the villains attempt to make their getaway in a helicopter. (Little known fact: 67 per cent of all helicopter journeys in films are made by baddies making an ill-fated attempt at escape. Oh, okay: Exploding Helicopter just made that up.) 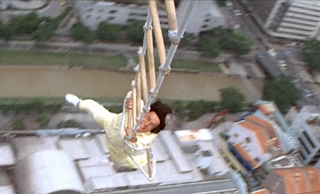 Not to be stopped, Chan jumps off the vertiginous building onto a rope ladder that is still conveniently dangling from the chopper. The pilot tries to shake off our little hero by bashing him repeatedly through a series of advertising boards, but he doesn’t budge.

And why would he? This, after all, is a man who survived filming the lamentable crime caper The Tuxedo with Jennifer Love-Hewitt. This is the brave, brave soul who endured several scenes of Arnold Schwarzenegger playing an Arabian Prince (‘I ahm der Eas-dern Prinzz’) in Around the World in 80 Days. There is simply no punishment he cannot take.

Spotting an approaching train, the pilot tries to rid himself of the pesky Chan by swinging him like a conker into the onrushing locomotive. But with some artful gymnastics, Wacky Jackie avoids a splatty demise and ends up atop one of the train carriages.

Meanwhile, the trailing rope ladder gets caught up in the workings of the locomotive. Unable to fly away, the villains have no choice but to land the whirlybird on top of the train.

Naturally, a Hong Kong fist-fight breaks out between Chan and the bad guys, which is probably why no-one notices an approaching steel-girded bridge. Sure enough, the chopper smashes into the ironwork and promptly ignites.

As they used to say at British Rail: ‘Let the train take the strain.’

At this point in the movie, the helicopter has already made a number of tantalising appearances. And of course, any fool knows there’s only one reason for a chopper to be in an action movie – so in cinema terms, it’s been showing a bit of leg and flashing its cleavage for quite a while now.

By the time it finally lands precariously atop a speeding train, helicopter conflagration enthusiasts – rubbing their thighs and panting for some hard action – are literally gagging for some blessed release.

To the casual viewer, this train-related chopper fireball might appear unique. But exploding helicopter scholars will already know that there’s actually a surprising number of them.

See Broken Arrow, Derailed, Lasko: Death Train or Blue Thunder. And perhaps most spectacularly, Mission Impossible. (Although that movie is certainly sullied by the presence of CGI.)

Meet the cop that cannot be stopped!

This film includes “probably the greatest stunts ever filmed in any movie ever.” Those aren’t Exploding Helicopter’s words, but those of no lesser an authority than Quentin Tarantino.

That wasn’t the view of judges at the Hong Kong Film awards though, who gave that year’s best action choreography gong to Once Upon a Time in China II. Boo!

Review by: Joe
Posted by Exploding Helicopter at 15:47 2 comments: