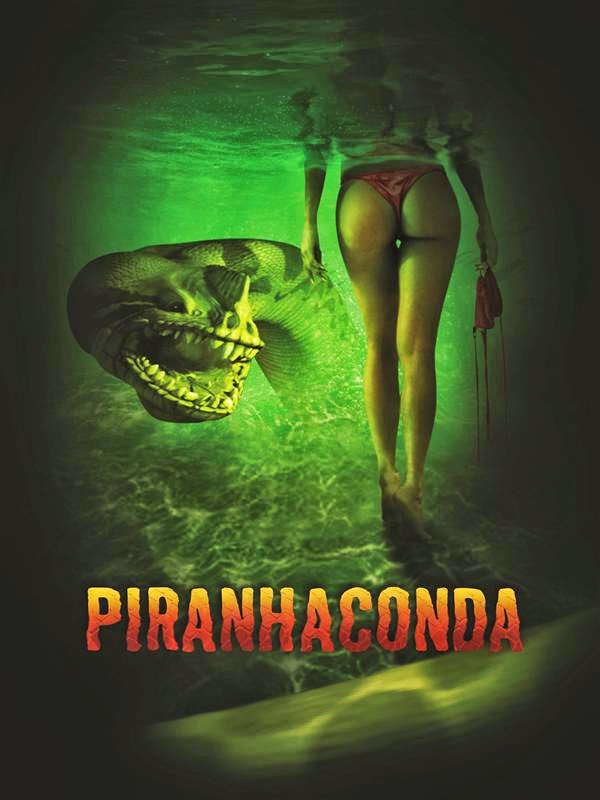 Watching exploitation flicks can be a joyless affair. By their nature, they tend to be low on budget, originality – and most depressingly, entertainment.

Possibly, the only thing worse than sitting through such hackneyed drivel is writing a review of it for a niche film blog dedicated to an invented micro-genre. (Note: that’s this one, in case you thought Exploding Helicopter was suggesting you click off to somewhere more interesting).

But occasionally, just occasionally, you encounter an exploitation film that remembers the genre is actually meant to be fun. Sometimes, a movie plants its tongue so firmly in cheek, and delivers its genre tropes with such breezy wit, that you leave feeling as if you haven’t been, well, exploited. Friends: I give you Piranhaconda (2012).

After stealing a nest full of piranhaconda eggs, an Indiana Jones-style scientist-adventurer (Michael Madsen, continuing his downward career spiral with admirable alacrity) is captured by a mysterious gang of criminals.

Big Mike is quickly joined in captivity by a bunch of actors from a nearby films shoot (note: this film is taking place in a curiously populated area of ‘remote’ jungle).

But before the villains can start cutting out old newspaper letters into a ransom demand, the piranhacondas go on a slithery, teeth-gnashing rampage to get their unhatched younglings back. Can our heroes escape the kidnappers’ clutches? Will they evade the murderous reptilian fish? And could someone please explain what the hell a piranhaconda is?

In a staggeringly unlikely piece of casting, Michael Madsen plays a professor of herpetology (the study of reptiles and amphibians in case you’re wondering). If that idea isn’t mind-melting enough, his character is called Professor Lovegrove. Hmmm shabba. Slouching through the film with his usual smirking sang-froid, the ear slicing Reservoir Dogs star seems as amused as the audience by his bizarre casting.

The only other cast member of note is Rachel Hunter who crops up as a henchwoman in the kidnappers’ gang. The former Mrs Rod Stewart (an unhelpful label given how many identical-looking leggy blondes this tag now applies to) doesn’t appear too interested in the film.

Her limp contribution is mercifully ended early, when she’s mounted by a slithery aberration with a gaping mouth and leathery skin. Probably reminded her of her wedding night.

Why on earth should I watch?

The film-within-a-film subplot provides a surprisingly rich source of gags for the viewer to enjoy. With fully intentional irony, the crew in the jungle are shooting a low-budget slasher called Head Chopper 3. Cue loads of knowing jokes about horror genre conventions and bad acting, which are as much a commentary on the film we’re watching as they one they’re pretending to make.

Admittedly, this sort of meta-critique is hardly new, and has been done better elsewhere: the Scream films, for example. But God – and Exploding Helicopter – loves a trier, and the movie’s game efforts to please are goodwill in the bank.

Why would this be best avoided?

The presence of a decent baddie can be the making of a movie. (See Alan Rickman in Die Hard and Robin Hood: Prince of Thieves.) By the same token, a clunkingly bad one can sink a movie like a stone. (Hello there, Arnold Schwarzenegger as Mr Freeze in Batman and Robin.)

Piranhaconda positively cries out for a bit of moustache-twizzling, panto-villain cruelty from the kidnap gang’s leader. Unfortunately, jobbing actor Michael Swan exudes all the menace of a pedantic parking warden. When you’re being out-menaced by a former supermodel who’s supposed to be in your own gang, it’s probably time to jack in the acting lark.

The key scenes occur at the start of the film shortly after Madsen steals the piranhaconda eggs. He plans to make his getaway in a chopper that’s hovering nearby, but the enraged snake has other, largely homicidal, ideas.

Before Madsen can hop onboard, the piranhaconda rears up and bites the unfortunate vehicle. The pilot loses control, and the damaged chopper spins towards the ground and explodes.

Good: there’s a decent fireball. Even better, the rotor blades sheer off and hurtle towards the camera adding a touch of extra drama.

Helicopters don’t tend to be bitten very often in films (they’re clearly not very appetising), but there have been other examples – in Godzilla (1997) and Robocroc (2013).

Many films get bogged down with expositionitis – the compulsive need to explain everything to the viewer. Invariably, this involves turgid exchanges between two characters as they expound lengthily on the plot.

There was much reason to fear that Piranhaconda, with its need to explain away its unlikely-sounding titular creature, would fall foul of this trap. Not so. The film deals with the whole matter in three commendably brief sentences.

“It’s like an unholy union between a piranha and an anaconda.”
“You mean a piranhaconda.”
“I can’t believe you just said that.”

Review by: Jafo
Posted by Exploding Helicopter at 07:00 No comments: