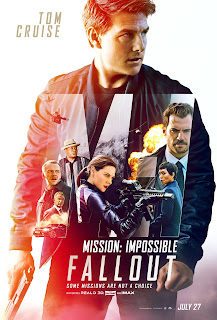 It's a wonder that Tom Cruise is still making Mission Impossible films.

Not because of declining box office returns or increasingly critical reviews. No, it’s simply that the Cruiser should surely be dead by now.

Whereas other leading men of a similar age are opting for a more sedentary career route, Hollywood’s favourite hyperactive fifty-something has spent the past year running, fighting, crashing, crawling, stunting and, yes, actually breaking his leg in the name of movie-making.

Indeed, having turned the franchise into a global phenomenon by performing all his own stunts, Tiny Tom is now trapped in a cinematic kamikaze spiral where he has to perform increasingly dangerous feats – hurtling off the world’s tallest building, strapping himself to an actual flying plane – merely to maintain the audience’s interest.

That’s why, four years away from his bus pass, his preferred mode of transport, rather than catching the No. 46 to Safeways, is dangling off the landing rails of a flying chopper while a grinning baddie repeatedly stamps on his hands. You get tired just watching him.

You’ll never believe this, but stolen nuclear material is about to fall into the hands of devious terrorists. (Copyright: every espionage movie, ever.) Of course, Ethan Hunt faces the usual piston-armed race against time to get it back.

However, this predictable premise is given a welcome twist by the reappearance of creepy Solomon Lane (the villain from Rogue Nation). And then Hunt himself becomes the chief suspect for masterminding the entire plutonium plot. Crikey.

Like an old pair of slippers, the cast has a reassuring, comfortable familiarity.

As usual, Thomas Mapother IV - as he doesn’t like to be known - heads up the whole affair. Despite careering at speed towards his 60th birthday, he hyperactively bounces through the film in a manner that suggests he’s doing something highly illegal with monkey glands.

Alongside him is Ving Rhames, the only other survivor from the first impossible mission. While Cruise remains oddly preserved, the passage of time has not been so kind to Big Ving, whose broadening visage has now taken on a slightly unreal, waxy quality – almost as if he were wearing one of the film’s famous rubber masks. 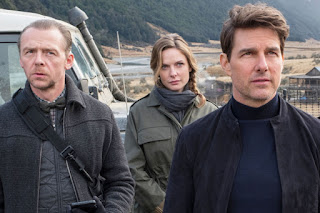 There’s also a role for franchise newcomer Rebecca Ferguson – whose turn as a British agent was the undisputed highlight of Rogue Nation. Once again, she oozes cool allure, pounding henchmen into hamburger meat and speeding through Paris in motorcycle leathers. And for all the double-crossing and secret identities, she’s the only one here likely to be mistaken for someone who can  act.

Which is just as well, since she has to pull off one of Hollywood’s toughest thesping gigs: portraying a plausible love interest for that demented-smiley-Scientologist-couch-jumper, Cruise. (She fails, of course, but it’s a feat no-one has convincingly pulled off in over 20 years).

Last, and we definitely mean last, is the joyless Simon Pegg. Introduced as a spoddy computer geek in M:I 3 to provide a few LOLs between the main action set-pieces, the scrawny comic has inexplicably been promoted to Cruise’s right-hand man.

This is unquestionably a bad thing. Where Pegg’s painful punchlines were once safely confined to a few brief scenes, his mirth-free mutterings are now an integral part of each film.

And true to form, Fallout opens with Pegg indulging in some tortured ‘banter’ with Tom and Big Ving, which only ends when heavily armed terrorists turn up. Sadly, they don’t take the opportunity to put a bullet through Pegg’s forehead.

Exploding Helicopter always likes to have a little a fun at the expense of the film and the actors we’re watching. But here’s the truth – Mission: Impossible – Fallout is a rollicking piece of entertainment.

This single movie contains more outstanding action set-pieces (a three-way fight in a toilet, a foot chase across London, the hijacking of a prison convoy) than most franchises manage across their entire series.

But M:I – Fallout is not just a rollercoaster of impressive stunt-work. It also deftly weaves in a more serious theme: the value of one life versus many.

It all adds up to a very satisfying experience, which delivers on the adrenaline-racing thrills without compromising the audience’s intelligence. In action movie terms, that makes Mission: Impossible – Fallout a rare beast indeed.

Naturally, given the nature of this film, the villain has come up with an overly complicated plan to detonate his nuclear bombs. And really, the tangled methodology in this one would make a Scooby Doo villain blush.

All you need to know is that the ‘McGuffin’ needed to defuse the weapons is being flown away from the danger zone in a helicopter by the rascally Henry Cavill (seen here sporting the ‘tache that cost £25m to ‘hide’ with CGI during the Justice League re-shoots).

The Cruiser gives chase aboard another chopper to set up the film’s climatic action sequence – a truly fantastic aerial duel between the two aircraft. Finally, after 20 minutes of airborne histrionics and thrills, we find TC and HC trading punches atop the fuselage of a wrecked whirlybird that’s swinging perilously on a wire off a mountain cliff edge.

With time running out before the bombs go off, Cavill finds himself in the unenviable position of hanging from wire on which the damaged helicopter is suspended. But having gained advantage, our favourite Scientology minion gives the wire a good hard yank, which sends Henry and the helicopter tumbling down the mountainside. The fuselage hits bottom and explodes.

Taken as an entire sequence, this could be one of the greatest additions to the exploding helicopter canon. We get tension, visceral thrills and ultimately the satisfaction of a chopper fireball. There really isn’t any more an audience can ask for.

Watching Henry Cavill plummet to this death alongside the wreckage of a damaged chopper, Exploding Helicopter was reminded of the Cliffhanger climax where Sylvester Stallone engineers a similar demise for John Lithgow.

In a film where so much attention is spent on creating inventive fight scenes and geographically accurate foot-chases, it’s a shame that the same care wasn’t spent on the dialogue.

After a shootout in Paris, the Cruiser attempts to console an injured policewoman.

“Je suis desole,” he says, in a line of French so painfully rendered that it drew audible titters in Exploding Helicopter’s cinema.

Review by: Jafo
Posted by Exploding Helicopter at 15:40 1 comment: