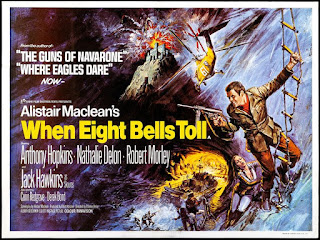 Sir Anthony Hopkins is no-one’s idea of an action hero.

Short, mumbly and shuffling, even in his prime the Welsh luvvie hardly exuded the flinty toughness of Seventies icons such as Lee Marvin or Charles Bronson. His appearance always suggested awkward college professor rather than iron-jawed super agent: he was more woolly cardigan than sharp tuxedo.

And yet, back in the early Seventies, a couple of Hollywood producers bafflingly decided he was just the man to lead an explosive new spy series. One that would strip James Bond of his licence to thrill.

Obviously, it must have seemed a good idea at the time. But as the twenty-fifth Bond film rolls into production, the sequel to When Eight Bells Toll (1971) still remains curiously absent from our screens.

When a series of ships carrying millions of pounds’ worth of gold bullion goes missing, Philip Calvert - a ‘maverick’ (natch) naval intelligence officer - is ordered to investigate.

Our nautical hero’s search takes him to the remote coastline of the Scottish Isles. Once there, he comes across wealthy shipping magnate, Sir Anthony Skouras, who not-at-all-suspiciously has decided to moor his luxury yacht among the pissing rain and howling winds of the Inner Hebrides. Instead of, say, Monaco.

As a top intelligence officer, Calvert detects something fishy in Skouras. (Plus, the only other living creatures within 200 miles are three inbred farmers and a few thousand sheep, so the suspect list is not extensive.)

With a target in his sights, Calvert sets about the task of stolen treasure hunting. Can he find the missing loot? Is Skouras really the mischievous mastermind behind the mystery? What might happen when eight bells toll? And will there ever be a sequel? No. 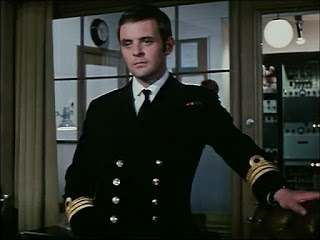 First question: how on earth did Wee Tony land this particular gig? And if he was the best option, who else must have been on the shortlist – John Cleese? Christopher Biggins? But not so fast, sceptical reader. Actually, there was a wonky logic to the casting.

At the time, our Tony was a sizzling talent on the London stage, seen as intense, edgy and brooding. So the producers reasoned he had the goods to create a grittier, moodier spy hero to rival 007’s increasingly fantastical exploits.

What they didn’t consider is that it’s much easier to appear tough on a stage where everyone else is wearing tights and saying ‘Hey, Nonny’, than it is in a movie where grown men are trying to kill you.

So while the dimunitive Taff brings a suitably flinty edge to his spoken scenes with arrogant superiors and lofty villains, ultimately that’s still Wee Tony swinging his little paws about in the fight scenes. Daniel Craig, he is not.

Playing the baddie is Jack Hawkins, that pug-faced star of Fifties British cinema, who earned international acclaim for his performances in The Bridge Over The River Kwai and Ben-Hur.

By the Sixties, both poor Jack’s career and health were on the wane. Diagnosed with throat cancer, Hawkins had his entire larynx removed, which robbed him of his distinctive voice. (Think: constipated Mongolian throat yodeller).

Here, as in many films at the end of his career, a sickly-looking Hawkins (who could only speak with an electronic voice-box) is dubbed by the mellifluously voiced Charles Gray. It’s a sad sight to see the once powerful actor appearing as such a pale shadow of his former self.

While Eight Bells Toll does have a certain ap-‘peal’ (see what we did there?), it also ‘rings’ a few false notes.

The basic plot - an underwater search for missing gold - is fine. Swap the ingots for nuclear weapons and you essentially have Thunderball.

But that film was set on the sun-kissed shores of the Bahamas and played out against a background of Caribbean carnivals, colourful henchman and beautiful damsels. This film takes place among the cold, wintery waters of the North Sea. When the only people wearing skirts are gruff, knobbly-kneed Scotsmen trying to kill the tiny hero, you know you’re in trouble. It couldn’t be less glamourous.

But still, there is at least one scene which we care about: the exploding helicopter. In an effort to find the gold, Hopkins conducts an aerial search in a chopper. As he surveys the coastline he runs into a posse of heavily armed villains who open fire on the whirlybird with machine guns.

The gunfire damaged helicopter spirals downwards, crashing onto rocks next to the shoreline. The tail of the helicopter explodes, but the cockpit remains intact. As flames start to consume the fuselage, Hopkins finds himself trapped inside the crocked copter.

The jeopardy increases when the wrecked whirlybird slips from the rocks and plunges into the sea threatening to drown our hero. As the cockpit fills with water, Sir Anthony is finally able to free himself and swim to safety. Phew!

The method of destruction – machineguns and crash landing – is very familiar territory for any self-respecting chopper fireball aficionado. But Exploding Helicopter enjoyed the way the scene teased with a tempting twosome of first a fiery and then a watery death for our hero.

The term "eight bells" is a nautical reference to the hour of midnight.

Review by: Jafo
Posted by Exploding Helicopter at 16:30 No comments: