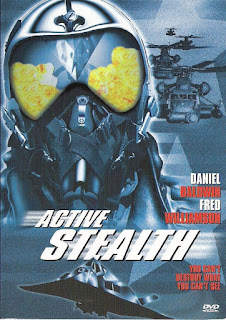 You get thrown the name of a film and then have to guess which of the brothers Alec, William, Daniel and junior frère Stephen, it features.

It’s simple to play, but devilishly hard to get right. Not least because apart from senior sibling Alec, the rest of the Baldwin clan are as indistinguishable as their work is unmemorable.

Still, fear not, for Exploding Helicopter has a secret formula to help you win this quiz every time.

Don’t believe us? Well, let’s play a round in this review and use it to find out which Baldwin is the star of Active Stealth.

A drug cartel in the invented Central American country of San Sedros (presumably close to such other fictional creations as Commando’s Val Verde or Delta Force 2’s San Carlos) is flooding America with cheap cocaine.

Officially, the United States is powerless to act. But the niceties of international law have long been an optional extra for Uncle Sam, so instead they cook-up an off-the-books ‘black op’ to put the drug lords out of business.

Using a new, highly sophisticated fighter plane that’s invisible to radar, an elite team of Army Rangers are sent in to shut-down the narcotics operation.

Following the immutable laws of the action movie, the plan quickly goes tits up. All of which (if we may temporarily be permitted to use the vernacular of rap music) leaves our heroes ‘fightin’ to preserve their health, stop the drug barons buildin’ wealth, an’ tryna escape using Active Stealth’. Word.

Of course, none of this tomfoolery answers the pressing question of the day: which Baldwin is the star of Active Stealth? Not quite sure? Don’t have a monkey’s idea? Let Exploding Helicopter help you.

Whenever you’re faced with such a sticky conundrum, just ask yourself the following questions:

Have I seen it, and was it any good?

If the answer is yes, it's Alec.

Have I seen it, and was it mostly terrible?

If the answer is yes, it's Billy.

Have I heard of it, not seen it, but instinctively know it's bad?

That would be Stephen.

Does this look like something that couldn't afford a Baldwin, but tried anyway?

It’s true. Unquestionably, Danny is the dullest constellation in the Baldwin firmament.

While Alec (when he’s not stropping-off at photographers, airline stewardesses or indeed his own daughter) can exude a charismatic authority; Billy a wonky seductiveness; and Stephen a roguish danger, the only quality Daniel brings to his roles is confusion as the poor viewer tries to remember which Baldwin he is.

(Note for Baldwin completists: The which-brother recognition task is made even harder by the existence of Adam Baldwin, who despite possessing the sort of instantly forgettable CV that is the hallmark of the family, is not actually a Baldwin brother).

In Active Stealth, Danny Boy is cast as the leader of an elite squad of Army rangers. But his performance is betrayed by a generous paunch that suggests his military training involves more time with the dessert course than the assault course.

While the name may not be recognisable, the permed mullet will be familiar to all fans of cult Eighties classic Road House, in which the spandex-clad warrior had a memorable showdown with Patrick Swayze.

Haven’t I seen this all before?

As the action unfolds, viewers of Active Stealth will be forgiven for experiencing a strong sense of déjà vu.

In part, that’s due to the utterly formulaic nature of the ‘men on a mission’ plot. But it will also be as a result of the fact many viewers will literally have already seen this film – or at least parts of it.

That’s because owing to its low budget status much of the action has been lifted from other movies. Shots of a stealth fighter plane are lifted from another, equally terrible, DVD actioner: Black Thunder. A helicopter attack towards the end is nicked from Eighties cop movie Bulletproof.

After completing their mission, our escaping heroes are pursued by some of the drug lord’s goons who are aboard a Mil Mi-24 type attack helicopter. Things look very bad for a moment – after all, the chopper is bristling with heavy duty weaponry.

But in much the same way that any respectable gun-toting baddie, faced with a prone hero defenceless on the floor before them, will always find an implausible reason to let them get up again and ultimately kick their face in, so too do the helicopter goons have a sudden lapse of judgement.

Despite being equipped with enough devastating weaponry to wipe out a small town, the henchmen instead opt to fire a pea shooter-looking machinegun from the open door on the fuselage.

Which handily gives one of Baldwin's commando hombres, a pint-sized Mexican sidekick, plenty of opportunity to whip out a rocket launcher and blast it at the whirlybird. The missile streaks towards the aircraft which, inevitably, erupts in a gloriously huge explosion.

All of which makes about as much sense as giving a steroid-inflated Austrian a bit of Spanish doggerel as a catchphrase. Hasta la vista, indeed.

There’s a juicy aerial fireball when the missile first hits the chopper, and we get a second detonation when the flaming fuselage crashes to the ground.

But even before all that, there’s a nice shot of the gun-toting henchman flinching as he watches the incoming rocket and realises his fate.

All-in-all, the above-par helicopter explosion is a lot better than the rest of this uninspired film.

“I don’t know if I can do this anymore, jumping out of helicopters for Uncle Sam.”

Whilst Exploding Helicopter doesn’t want to trivialise drug addiction, we couldn’t help but be amused by this piece of trivia. In 1998, Daniel Baldwin was found running naked through the halls of New York's Plaza Hotel shouting "Baldwin!" and was arrested for possession of cocaine. He pleaded guilty to disorderly conduct and was sentenced to three months in drug rehab.

Popular opinion holds that the 40-second CCTV clip of Danny flouncing down a hotel corridor, flaccid todger swinging, remains the most compelling work he’s committed to film. Like the Hoff’s sublime ‘eating burger off the floor while shit-faced’ clip, it suggests that some Hollywood D-listers can only truly ‘inhabit the character’ when their own character is inhabited by half a pound of coke and four bottles of hard liquor.

Review by: Jafo
Posted by Exploding Helicopter at 14:49 1 comment: