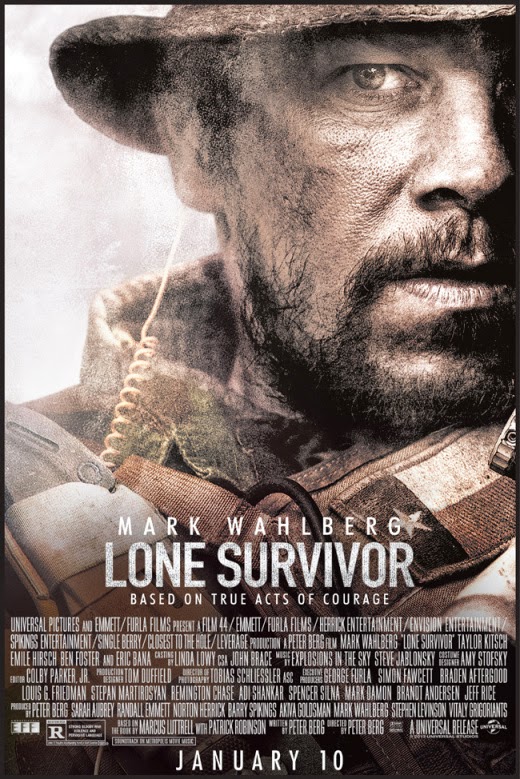 Lone Survivor (2013) is one of the most brutal, blood-splattered war movies ever committed to celluloid. During the course of this gruelling film, hundreds of people are brutally shot, stabbed and bludgeoned to death in graphic, documentary detail. And yet, by the end of a juddering 121 minutes, perhaps the greatest casualty is any sense of realistic characterisation.

Based on real events, the film tells the story of a bungled operation to kill a high-level Taliban leader in Afghanistan. A small reconnaissance team is sent to discretely locate the target. But after being discovered, they quickly find themselves surrounded by the local militia.

Unable to summon help, the soldiers are forced into a desperate battle to both save their lives and come across as three-dimensional characters. (Given this is a Peter Berg film, it’s probably not giving too much away to say that the odds for either of these aren’t too promising.)

Funky bunch rapper, hamburger entrepreneur and occasional actor Mark Wahlberg plays Marcus Luttrell – the titular character. Naturally, everyone else in the cast is expendable cannon fodder. (The clue’s kind of in the title.)

Making up the rest of Wahlberg’s condemned team are Ben Foster, Emile Hirsch and Taylor Kitsch – an actor whose vacant, surfer dude persona and wooden acting are reminiscent of a younger, slightly less convincing, Keanu Reeves. When they’re hiding out in a forest at one point, it’s actually hard to spot Kitsch among all those other prime hunks of timber.

Further target practice for the Taliban is provided by perennial movie corpse, Eric Bana. Having met a sticky-end in Star Trek, Troy, The Time Traveller’s Wife, and Hanna, Eric’s not really the guy you’d want to see leading your rescue mission.

And sure enough, as soon as everyone’s least favourite Hulk tries to save Wahlberg, he gets an RPG straight up his jacksy. Only Sean Bean has a ‘death reel’ to rival the Aussie lunk.

While Berg has little interest in narrative niceties such as plot and character development, he is at least keen to depict war in all its visceral hell. This lack of squeamishness results in some of most intense combat scenes Exploding Helicopter has ever encountered – filled with pulse-pounding tension, fear, and confusion.

Outnumbered and outgunned, our heroes are not so much injured as gradually mutilated by the punishing array of guns, rockets and grenades ranged against them. Bones break, limbs are shot-off, and blood pumps furiously from gaping wounds. An episode of Casualty, this is not.

The most powerful scene in the film sees the surviving soldiers try to escape their pursuers by throwing themselves down a steep cliff. As they hurtle uncontrollably down the slope, the sound and camerawork makes you feel like you’re experiencing every impact as they smash into trees, rocks and boulders. By the time they get to the bottom, it feels like you’ve careened down the cliff yourself.

While Peter Berg’s sledgehammer approach to film-making brings vitality to the combat scenes, it poses big problems whenever the actors have to do some of that old-fashioned ‘acting’ stuff that used to be so popular.

The film has barely begun before our heroes, in a series of entirely unnatural conversations, unload a heavy barrage of character exposition. They shell the viewer with unnecessary stories about how much they love their families, and engage in much strained bros-in-arms joshing.

It’s all utterly unconvincing: the scenes are simply there to establish each character as action movie stereotype A, B or C. So by the time Taylor Kitsch starts yakking away about his upcoming marriage, he may as well hold up a sign saying: ‘Dead by the end of the second act’.

(It’s a well-known staple of these movies that no character ever mentions impending nuptials, or even looks fondly on a pic of a ‘special gal back home’, without getting solidly murdered to death within the hour.)

Notably absent from all this emotional elucidation is Mark Wahlberg. As anyone familiar with war films knows: the man with the least to live for is the guy who gets to go home. So when the Wahlburger tells us that all he wants to do on getting back to the States is chop down the tree in his garden we can be sure he’ll make it to the end credits.

(And in fairness, standing next to a big lump of wood will probably remind him of all those good times with Taylor Kitsch.)

Such character problems were readily apparent in Berg’s previous film Battleship, a movie exclusively populated by cardboard cut-outs – including a mono-featured Rhianna, who has arguably shown more expressionistic range in those innumerable tweeted photos of her own arse.

So flimsy was the characterisation that the actors wore t-shirts with ‘Navy’ and ‘Army’, as if that was the most interesting thing about them. Often, it was.

Fatally, Lone Survivor includes a credit that has marked the death knell for many a movie: ‘Made with the full cooperation of the US Army’. Inevitably, this translates into unending scenes of flag-waving, tub-thumping jingoism.

The film’s opening is little more than a glorified recruitment video for the US armed forces where soldiers are lectured on the values that make them men: honour, loyalty and comradeship. Hu-ah!

As if that wasn’t bad enough, the whole thing is rounded off with a lachrymose cover version of David Bowie’s Heroes. At some points, the whole thing veers dangerously close to Team America’s ‘Fuck, yeah!’ territory. Hail to the chief, indeed. Now, will someone pass the sick bag?

So, to our favourite casualty of war. This occurs when a big Chinnock helicopter is scrambled for a rescue mission. There’s a strong hint that the big whirlybird could be doomed as soon as we see the ill-omened Eric Bana climb on-board. (Possibly only Dracula has spent more time dead onscreen than the accident-prone Antipodean.)

It flies out to the mountain where Wahlberg and his team are trapped by the Taliban. But before reinforcements can be dropped off, one of the Afghans fires an RPG.

The missile flies straight inside the back of the whirlybird via the open loading ramp. Soldiers dodge out of the way as the rocket flies down the centre of cargo hold.

Hitting the cockpit, it ka-booms and completely severs the front half of the chopper. The dismembered helicopter falls to the ground and explodes. Ho, hum. Eric Bana killed in action once again.

Whatever gripes viewers may have against Peter Berg, the lad knows how to stage an action sequence. This is a high quality, well-executed chopper fireball.

I loved how the missile flew down the inside of the Chinnock - an innovation we’ve never seen before.

Surprisingly, despite expiring so many times onscreen, this is the first time Eric Bana has been killed by an exploding helicopter. One suspects – and hopes – it won’t be the last.

This indeed is a small world. Marcus Luttrell - on whose story this film is based - was friends with Chris ‘American Sniper’ Kyle, having served in the Navy Seals together.

Still want more? Then you can listen to the Exploding Helicopter podcast episode on Lone Survivor. Find us on iTunes, Spotify, Acast, Stitcher or listen right here....

Posted by Exploding Helicopter at 11:04 2 comments: