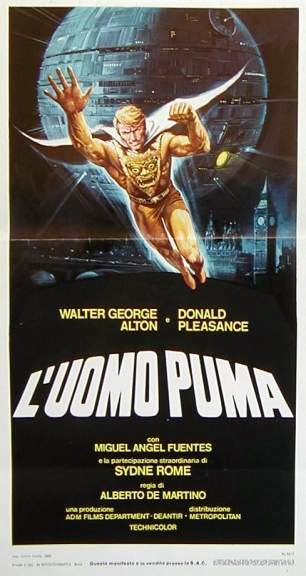 Pitching a movie these days is a bit like catching a fish: you have to hook them immediately, or it’s all over.

You’ve got to sell it in a sentence: Lethal Weapon with Chicks (The Heat); Die Hard in the White House (Olympus Has Fallen); Die Hard, except Really Tired and Shit (A Good Day to Die Hard).

Thirty years ago, things were very different. Those were the days when bonkers director Alberto De Martino told studio heads: “There’s a cat-flavoured superhero with the powers of an ancient Aztec god, and Donald Pleasance trying to control world leaders’ minds – while dressed in a bin bag.” And it got made.

Exploding Helicopter has seen some loopily strange films before, but when it comes to downright weird, The Pumaman (1980) takes the biscotti.

The film’s hero is Tony, an archaeologist who wiles away his days peacefully dusting off artefacts in a museum. But the mild-mannered chamois-botherer soon has to put down the Mr Sheen down when he’s visited by Valdinho, a mysterious shaman.

The lofty ancient informs Tony that he’s no ordinary cleaner of ancient pottery. Oh, no. He is in fact, the Pumaman: descendant of an Aztec god and inheritor of special powers.

After enjoying a quick saucer of milk – only kidding! – our feline trouper throws off the shackles of bookish academia. Why? Because the world is being threatened by a nefarious criminal mastermind named Kobras. (Donald Pleasance, clearly signalling his evil intent by the fat-man-in-fetishwear ensemble he racily sports.)

It transpires that Donald, in truth looking more Alf Garnet than Emperor Ming, has uncovered an ancient Aztec treasure that gives him the power of mind control. Only the Pumaman stands between him and total bin bag-accessorised world domination.

Luckily, Tony has an impressive array of Puma-like powers at his disposal. He can fall from a great height, like a puma. See in the dark, like a puma. Use his hands as powerful claws, like a puma. Fly, like a, erm, puma. Teleport, like a…oh, never mind.

It’s rare to see a film this honestly bad. Walter George Alton's attempts at emoting will have viewers everywhere coughing up a fur-ball, and Miguel Angel Fuentes's monotone turn as the semi-naked muscle man makes one yearn for Big Arnie’s superior range.

But it’s all good fun. Exploding Helicopter often gripes about ‘ironically’ bad films, which tip a postmodern wink at the audience about their own shitness and presume that makes everything okay. (Note to film-makers: it doesn’t.) The Pumaman, however, is one of that rare breed: so bad it’s genuinely good.

But let’s teleport, in, er, puma-like fashion, to the crucial scene. Realising the game is up, Bin-Bag Donald flees in every decent villain’s getaway vehicle of choice: the helicopter.

The Pumaman ‘flies’ after him (with his costume clearly indicating where the wires are attached) and an aerial duel breaks out, which is every bit as shoddy as the other action sequences in the film.

There’s much unconvincing ‘blue screen’ work as a clearly superimposed Tony evades Pleasance’s attempts to shoot him down. Finally, the Pumaman gets close enough to open the chopper door and climb in. At this point, Donald – despite his pensionable age and restrictive kitchen accessory clothing – gamely starts wrestling with him.

Without anyone at the controls, the helicopter plunges towards the ground. Realising the vehicle is out of control, Tony bails out and leaves Kobras to his fate. The copter smashes into the ground and explodes, leaving Donald’s charred body handily already wrapped up in plastic wrap for disposal.

Risible. In keeping with the z-grade special effects used elsewhere, the helicopter that crashes into the ground couldn’t look more like a toy model if Fisher Price were printed on the side. In fact, if you look closely, it might well be.

This is the only known destruction of a helicopter by a man with superpowers of a puma, a distinction this film is likely to hold for all eternity.

Interestingly, it’s very nearly the first known superhero-related exploding helicopter. However, Superman II – which came out in the same year – features a chopper that’s destroyed by General Zod and his henchman. So, an honourable tie for both films.

The mentor is a familiar trope of the superhero film. Such flicks generally feature a grey-haired, avuncular type who dispenses profound-sounding pseudo-bollocks to help young charges understand their new gifts and responsibilities. (Think Uncle Ben in Spiderman, or Pa Kent in Superman.)

In many respects, Vadinho the shaman plays just this role. But of course, director Alberto De Martino isn’t a one to play things too safe. So instead of stay-press slacks and a woolly jumper, this movie’s mentor opts for the less conventional naked-bodybuilder-with-a-mullet look. He is perhaps the first superhero father-figure to look like a bouncer at a Tijuana whorehouse.

Still, even worse horrors are in store. For reasons known only to the (admittedly bonkers) director, most action sequences are scored with the kind of saccharine euro-disco last heard accompanying a Ceefax page. Just awful.

“I’ve never seen anyone make love in the air.”
“But that’s how you make little pumamen.”

Donald Pleasance once cited this as the worst film he’s ever made. That certainly seems to be the august view of users of IMDB, who have ranked this the 19th worst film in cinematic history.

If you're still not convinced that The Pumaman is a 'so good it's bad classic' then have a listen to Exploding Helicopter talk about the film on Flight, Tights, And Movie Nights podcast.

Review by: Jafo
Posted by Exploding Helicopter at 20:20 7 comments:

The Battle Of Sinai 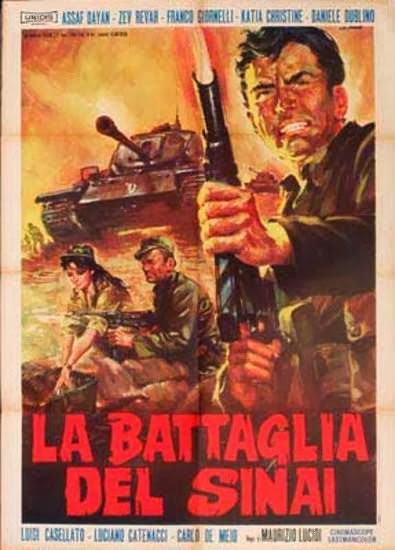 War is hell, a wise General once wrote. Maybe he’d seen this movie.

Set during the 1967 Arab-Israeli War, The Battle Of Sinai (1969) features a small patrol of Israeli soldiers who, after a skirmish with the enemy, become stranded in the desert. While walking back to their lines, they stumble upon an Egyptian missile base and – stirred by patriotic duty – resolve to launch a daring raid.

That summary makes the film sound like a rip-roaring tale of action, adventure and heroism, but there’s a huge hole at its centre. Put simply, this is a war movie with a conspicuous absence of…er, war.

That means no tank battles; no aerial dogfights; no bayonet charges; hardly even a cross word, in fact. Instead, there are interminable longeurs as our heroes drive peacefully through the desert.

One rare moment of action sees their jeep wrecked, but that’s just a prelude to more joyless scenes as the group trudge wearily across the featureless Sinai desert.

Remember that famous scene in Lawrence of Arabia, where a single shot shows Omar Sharif slowly riding a camel towards the camera for five minutes? Just imagine that scene lasting an hour and thirty minutes, and you’ll begin to get some sense of how it feels to watch this film.

If the director is trying to convey the desperation of being lost in a vast expanse of nothingness, then hats off to him. That’ll certainly be the sensation of anyone trying to sit through this nonsense.

Make no mistake: The Battle of Sinai is a grimly boring film; one you don’t so much watch as endure. The great irony is that a film about the Six Day War – one of the shortest conflicts in history – should feel so interminably long.

The only real moment of interest occurs following a skirmish with the enemy, when our heroes call in a helicopter to evacuate their wounded buddy. But wait! One of the Egyptians isn’t dead yet, and he unleashed a machine gun at the landed chopper which (and Exploding Helicopter wouldn’t be writing this if it didn’t) quickly becomes a casualty of war.

Helicopters should ideally blow up mid-flight, so marks are deducted for exploding a stationary one. However, it is a very realistic-looking chopper and it produces a lovely, rich, consuming fireball.

The Israelis watch the smoke clear from the wreckage of the wrecked whirlybird in complete silence. Why? Are they reverently contemplating the sight of an exploding helicopter? Is it a bare-faced art house ‘moment’ manufactured to stir our emotions? Are they slowly nodding off because they’re bored too? Who knows? And really, by this point, who cares?

There’s no great innovation here, but in fairness helicopter explosion was a young art form in 1969 and filmmakers were still establishing the parameters of the genre. Director Maurizio Lucidi should be heralded for helping to lay the foundations on which later directors would ply their trade.

Yes, but – typically for this film – in an utterly unexciting way. Two medical nurses manage to undramatically disembark from the chopper before it’s shot up by the Egyptian. Big wow.

In a film which rarely troubles the contented snoozing of its audience, the raid on the missile base is decently staged. It’s about the only moment where it’s actually clear what is happening to who and why.

The film ends with a narrated epilogue which states that war never solves problems, and urges Jews and Arabs to bury their differences and fight their common enemy: the desert.

Exploding Helicopter doesn’t really follow world events, but does anyone know how that one’s going?

Nothing sums up the experience of watching this film more pithily than when one character wearily exclaims: “Two hours...two hours have passed in this bloody war.”

Guess who made this film about a bunch of impossibly tough soldiers who, hopelessly outnumbered, refuse to back down and snatch a victory against the odds within a week? A group of Italians.

No, that wasn’t a typo. This war movie was indeed made by people whose own national army are literally world famous as serial retreaters and champions of capitulation. (Remember the old school joke about the Italian tank with five gears: one forward and four reverse?) Most certainly, a case of art not imitating life.

Review by: Jafo
Posted by Exploding Helicopter at 18:59 No comments: