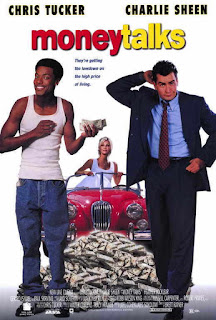 As its title suggests, Rush Hour (1998) hit cinemas like a shot of adrenalin and got audiences feeling very giddy indeed.

In truth, hopes had not initially been high. A variant on the buddy cop formula (copyright: Walter Hill and 48 Hours), the film teamed gobby joke-smith Chris Tucker with martial arts legend Jackie Chan for the usual squabbling-then-bonding shtick.

But audiences loved it. An unexpected box office smash, it spawned two hugely profitable sequels that improbably transformed Tucker into the world’s highest paid actor. (The fact he pocketed $25m for Rush Hour 3 is by some way the funniest thing about that particular film.)

To most people, the helium-voiced comic appeared to spring from nowhere. But he’d actually given his sidekick skills a dry-run in an earlier, now largely forgotten film – Money Talks (1997).

An unscrupulous TV reporter (Charlie ‘Winning’ Sheen) engineers the arrest of a small-time conman (Tucker) to create a story for his news channel.

But as the luckless thief is being taken to jail, he’s unwittingly caught up in a prison break when a criminal kingpin is sprung from chokey. The famously unforgiving LA police, mistakenly believing him responsible for the death of several officers, vow to bring in the hapless crook ‘dead or alive’ (with a pointed emphasis on the dead).

Hunted across the city and desperate to prove his innocence, the wronged felon turns to an unlikely source of help: the shady journalist who landed him in this mess in the first place.

The perfidious pair partner up. Can the criminal clear his name? Will the heinous hack get an exciting exclusive? Will this movie avoid shoddily mining every single buddy cop cliché in the book? No. 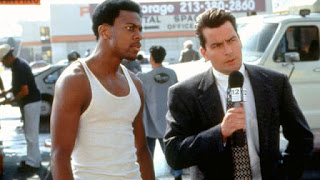 By playing fast-talking crook Franklin Hatchett, Chris Tucker found the perfect foil with which to reprise the motor-mouthed monologues that had made his stand-up act such a success. Although how the jibbering joker ever became a top comic remains a mystery to Exploding Helicopter.

His trademark rapid-fire repartee seems born not so much from an urgent need to share the zinging punchlines percolating in his head, but rather to obscure the fact that nothing he says is terribly funny. He’s the comedy version of a hamster on a wheel – expending huge amounts of energy but going nowhere.

Worse still, the stream of consciousness word-blurt is delivered in a migraine-inducing falsetto. Screechy and speedy but never funny, Tucker’s whole career is a triumph of sass over substance.

Indeed, the coke-snorting wife-beater’s most profitable period as a thespian came while playing a sanitised version of himself in the hit TV series, Two and a Half Men. Sadly, his newfound popularity convinced the Platoon star – who once ‘accidentally’ shot a fiancée - that what his viewers really wanted was to see more of the ‘real’ him.

The buddy movie formula is painfully simple: shove two contrasting personalities together, then sit back and watch the sparks fly. The only real rule is that, while the partnered protagonists aren’t meant to like each other, the audience should find one or other of them appealing (or at least be amused at their sparring).

That clearly was an ask too far for ‘Money Talks’ and its hapless director, Brett ‘Fatty’ Ratner – a plodding cinematic journeyman whose mantra should be: ‘Will this do?’ Against the odds, Ratner manages to give us two irritating characters, played by two unlikeable actors, in an adventure you care little about.

Exploding Helicopter lays no claim to be a film scholar, but we’re pretty certain that’s no recipe for enduring success.

Still, at least there’s a helicopter explosion. The pivotal scene takes place at the LA Coliseum during the film’s big climax. Our *ahem* heroes are pursued by two rival gangs who each want a cache of stolen diamonds (a sub-plot too tiresome to explain) that Tucker has in his possession.

As a massive gun battle breaks out, Sheen cleverly uses hand-grenades to booby-trap a helicopter belonging to one of the villains. When the police arrive, the baddie tries to make an aerial getaway. But the chopper’s take-off triggers the hidden explosives, creating a fireball that consumes the helicopter.

It’s always nice to see a villain’s despairing death throes and Money Talks treats us to a fine example of the form. As flames envelope the whirlybird’s fuselage, the desperado recognises his imminent fate and screams a despairing “Noooo….” before he too is turned to ashes. Quality stuff.

Exploding Helicopter appreciated the clever and unique way in which the chopper was rigged to explode.

Basically, Sheen pulls the pins from several grenades and jams the now primed devices under the copter’s landing skids. As the chopper takes off, the pressure on the grenades’ levers is released causing them to detonate. Ingenious.

After making Money Talks, Chris Tucker became a born-again Christian. It’s still not known whether God has forgiven him for this risible tosh.

Review by: Jafo
Posted by Exploding Helicopter at 16:52 1 comment: