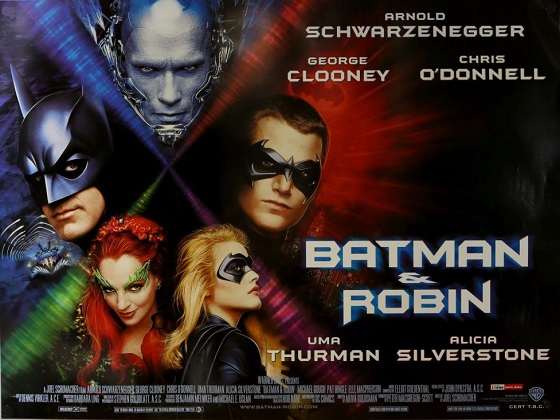 After Tim Burton jumped ship, the captaincy of the Batman franchise passed d to Joel Schumacher – with near disastrous consequences.
With Michael Keaton also departing, the bat cap was donned by a visibly bored Val Kilmer (Big Val and Schumacher famously didn’t get on during the making of this film). While Tommy Lee Jones (Two Face) and Jim Carrey (The Riddler) mug their way through the film as two of the most annoying villains in superhero film history.
These problems made Batman Forever (1995) a hugely inferior sequel, but it was nothing compared to the cinematic crime that Schumacher committed two years later with Batman and Robin.
Widely considered one of the worst superhero films ever made, the film derailed the franchise so seriously it would be more than a decade before the Caped Crusader would return to the cinema screen.
Still, whatever the flaws, Batman Forever does feature an exploding helicopter. This occurs while Two Face attempts to steal an enormous bank safe. Using a Sikorsky helicopter, Two Face rips the vault through the bank’s wall and then tries to fly off with it.
Fortunately, Batman is on hand. He unhooks the safe from the helicopter, then climbs onboard the chopper. Using his cape, Batman obscures the pilot’s view causing him to crash into the Statue of Liberty (even though this isn’t New York).
Verdict
A pretty decent explosion and display of wreckage, but you would expect that from a film that cost $100 million to make.
Relevance to plot
Pretty negligible really as it is more an introduction to Two Face’s crazy criminal escapades rather than a crucial plot point. Is hauling a safe out a bank via helicopter and dragging it halfway across the city the work of an evil mastermind or a showboating idiot?
Artistic merit
Joel Schmacher knows his action onions and the scene is handled well although if you look carefully the helicopter itself looks a little model-like.
Exploding helicopter innovation
First helicopter to crash into the (fake) Statue of Liberty.
Positives
I like the artful way the rotor blades hack into the head as the debris slowly burns its way down the Statue of Liberty’s robes.
Negatives
Its rather unclear how Two Face escapes from the burning debris and a 500ft fall with no superpowers to speak of apart from the ability to toss a coin and act like an inferior version of the Joker.
Interesting fact
As part of creating the character of The Riddler, Jim Carrey planned to shave a question mark into his hair. However, as he was appearing in court to finalise his divorce, he ultimately decided against it.
Posted by Exploding Helicopter at 12:15 No comments:

Steven Seagal plays a regulation issue maverick cop who’s assigned to an unruly precinct after one act of insubordination too far.
The opening 10 minutes document Whispering Steve’s fall from grace which involves foiling an attempted assassination of the Vice President.


After speaking at a public event, the Veep’s convoy is attacked. Naturally, the Secret Service response is inept providing Whispering Steve with the excuse to step in and save the day.
After an alloy crunching car chase and bullet zinging shoot out, the villains whistle up a helicopter -complete with machine gunner – to help with the hit.

Grabbing hold of a machine gun, the aikido arm-waver takes careful aim at the helicopter and deploys some precision firing to take out the chopper's fuel tank. The explosion rips through the fuselage and the chopper fully combusts.
Intriguingly, prior to its incineration, the helicopter has what appeared to be an Eighties acid house smiley painted on the side. Presumably Seagal – who rather fancies himself as a blues guitarist – took great pleasure in destroying this visible reminder of how glo-stick wielding teens killed blues-based guitar music. 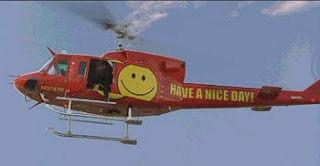 
A rather uninspiring helicopter explosion. Aside from Old Totem face’s one-man war on acid house little imagination been brought to the scene.


Any group capable of organising a high-level plot to assassinate the US Vice President would easily have the resources to muster a helicopter as part of their plan. However, the rave culture livery seems a rather odd choice when we learn that a red neck militia were behind the hit.


First known destruction of an acid house style helicopter. OK, I'm really struggling here. Pretty much none.
Interesting fact
Excluding Machete, in which he has a cameo, this was Seagal’s last theatrically released film before he entered the world of DTV.
Review by: Jafo
Posted by Exploding Helicopter at 17:48 1 comment: