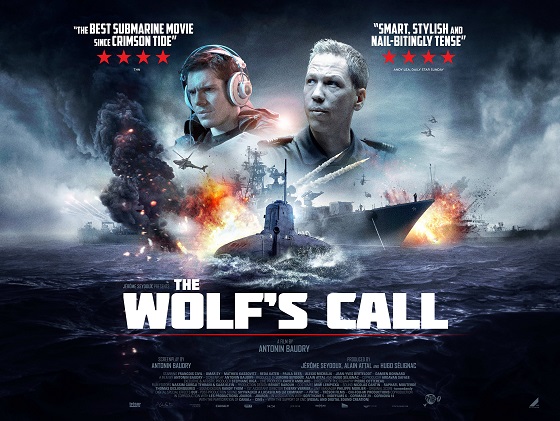 Is there anything harder to love than French cinema? Not in Exploding Helicopter’s experience.

If their filmmakers aren’t bamboozling the audience with avantgarde narrative structures, they’re boring them rigid with angst-laden characters discussing existentialism amid clouds of Gauloise smoke. The idea of simply entertaining the viewer seems positively offensive to their intellectual sensibilities.

This propensity for pretension would be bad enough were it confined solely to their prestige productions. But even when embarking on the most generic of genre films, our Gallic cousins still appear incapable of excluding their artier affectations. And if you want a case in point, look no further than la submarine drama, The Wolf’s Call (2019).

On its watery surface, this looks like just the kind of Hunt For Red October thriller you’ve seen countless times before. But peer beneath the waves, and you’ll soon detect the usual signs of showy self-regard, pulsing away like a pompous sonar. Mon dieu!

A French submarine crew find themselves at the centre of an international crisis when Russia launches a nuclear missile at their country. With their nation under attack, they’re ordered to sail in to position and fire a retaliatory nuke. Sacre bleu!

But wait! No sooner have the crew been given their irrevocable instructions, than the attack is found to be a heinous trick! The Ruskies didn’t fire the missile, after all. It’s actually some generic Jihadists (the villain du jour for lazy screenwriters) who are intent on destroying the West. Or at least France, so perhaps they’re not all bad.

The ‘grand fromages’ of the French military are now faced with a terrible dilemma. With their nuke-armed submarine already en route to blast an unwitting Russia into radioactive rubble, they have no choice but to send out a second submarine to seek and destroy their own men. Merde!

If you’ve watched any American action movies over the last 30 years, you’ll know how this story usually plays out.

An impossibly buff hero with perfect hair will hyperactively bounce through a series of obstacles before saving the day at the last minute (usually by disobeying orders and improvising a solution). Then he’ll grab an enviably hot girlfriend and motorcycle off into the blush of dawn. (Think Tom Cruise in Top Gun).

Au naturalment, our Froggy neighbours could never bring themselves to do anything so gauche. Instead, our protagonist is a spoddy sonar operator who spends most of the film, brow furrowed, listening to propeller cavitation on a pair of oversized headphones. Arnold Schwarzenegger, this is not.

With such strong nerd credentials, you’d think our big-eared hero would be unlikely to enjoy any romantic entanglements. Au contraire! You forget that France is a country where brainiacs and philosophers are more revered than rock stars. They’re practically pin-ups.

So, after pulling an unfeasibly hot bookshop owner (while attempting to buy a mathematics textbook, no less!), he gets to enjoy a passionate night of rumpy-pumpy. Oh-la-la!

But any viewers hoping to see the earnestly cerebral tone briefly enlivened with a bit of naked nookie will be left feeling decidedly limp.

Inspired by our man’s profession as a sonar operator, the sex scene focusses exclusively on the sounds of the couple’s conjugal canoodling. So, rather than shots of bouncing boobs or thrusting buttocks, you instead get abstract close-ups and the amplified sounds of racing heartbeats and heavy breathing.

In what is already a very French film, this seems like an impossibly French thing to do – the movie scene equivalent of a mime artist with a white-painted face pretending to be trapped inside a glass cube. Frankly, it’s a wonder we were spared the sonic stylings of our hero padding off to the khazi for a post-coital piss.

Mercifully though, once the action moves from the boudoir to the ocean bed, things do pick up and start resembling the Crimson Tide-style thriller you’d hoped to be watching all along.

Reda Kateb (A Prophet, Zero Dark Thirty) and Omar Sy (Lupin, Jurassic World) lend some welcome grit and gravitas as the two grim-faced, sweating sub commanders. And the final hour, in which the two submarines engage in an underwater game of cat and mouse as the clock relentlessly ticks towards doomsday, is genuinely tense.

Despite its loftier ambitions, The Wolf’s Call does turn out to be an intelligent and suspense-filled drama, which is well worth submerging yourself in for a couple of hours.

But enough aquatic theatrics: what about the aerial action? The exploding helicopter sequence occurs refreshingly early in the film, when a Syrian chopper is hunting a French submarine that’s trapped in shallow water.

While the method of destruction is routine, the setting certainly isn’t. This is the first-ever submarine versus chopper encounter recorded at Exploding Helicopter. (Unless of course, you count The Spy Who Loved Me and the famous encounter between Roger Moore’s submersible car and Caroline Munro’s shortly-to- be-destroyed helicopter. But then, expert readers like yourself already knew that, right? Right?)

Readers who’ve made it this far may be wondering what lies behind the film’s cool sounding yet puzzling moniker: The Wolf’s Call. Apparently, it’s something to do with sonar – though precisely what, we can’t tell you.

There’s a short, expository scene at one point where one character gamely attempts a garbled explanation, but it made precious little sense. Exploding Helicopter has watched the film twice now and is still none the wiser.

Posted by Exploding Helicopter at 10:44 No comments:

Attack Of The Killer Tomatoes 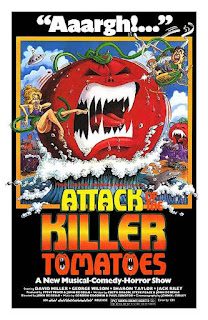 But if Bill the Bard never quite uttered those words, it’s clearly only because he never lived to see Attack Of The Killer Tomatoes! (1978) - a film with a cult following bigger than Jim Jones.

Made for a mere $90,000 by a bunch of have-a-go filmmakers, the film was panned by critics and largely ignored by audiences on its release. Yet as the years passed, a curious thing happened. The film steadily acquired a dedicated following – and at this point there have been three sequels, a computer game, a comic and an animated TV series. (Inevitably, a reboot is also in the works).

How did such an inauspicious film acquire the illustrious status it enjoys today? Exploding Helicopter set out to forensically investigate the issue. Or just glance at Wikipedia, if that was too much work.

When scientific efforts to improve the humble tomato go wrong, it transforms the normally docile salad staple into a murderous, human-hungry fruit. Yikes!

Naturally, in this moment of crisis, the Government calls in their top experts to tackle the fearsome fruit threat. The crack team includes a paratrooper who drags an open parachute behind him, a diver who's never out of scuba gear, and a master of disguise who conceals his appearance by dressing as a black Adolf Hitler. Well, we did say the world was in trouble.

The scene is set for an apocalyptic man versus lycopersicum showdown. Can our heterogenous heroes save the day? Will America succumb to the deadly Red Menace? And, most importantly, do you say ‘tomayto’ or ‘tomahto’? Let’s call the whole review off…

Attack of the B Movie parody

If all this sounds like it’d make a deeply terrible film, you’d be absolutely right. But then, that was always the point.

Inspired by old science fiction B-movies, Attack Of The Killer Tomatoes parodies the z-grade films that clogged up drive-ins during the Fifties and Sixties. (Who can forget such terrifyingly titled efforts as Attack Of The Mushroom People?)

At first glance, ‘Killer Tomatoes’ appears to be as bad as the films it’s supposed to be sending up. The acting is terrible, the sets shaky and the special effects profoundly non-special. (This was a product of the film’s cheap ‘outside the film industry’ origins rather than intentional homage). But despite the readily apparent limitations, it possesses an oddly infectious – and undeniable – joie de vivre.

The first half hour is terrific fun. It includes an amusing title sequence, a tomato-based Jaws parody,  and a terrifically daft sequence where senior military bigwigs hold a high-powered meeting in a comedically small room. And the quickfire style of the gags, which blend silliness, satire and slapstick, make it feel like a forerunner of the disaster movie spoof, Airplane! (1980).

However, like an eight-day-old tomato, it does all start to feel a little squelchy and off at around thirty minutes in. Plot lines quickly go nowhere, and it gradually dawns that the comedic value of some of the two-dimensional characters have an incredibly short shelf-life. But still, a few jokes continue to hit the target and the whole production’s full-blooded commitment to the absurd inspires forgiveness.

None of this, though, explains how the film went from obscure curio to cult classic. Let’s be clear: there is no shortage of god-awful-but-with-a-bit-of-kitschy-charm movies gathering dust in the world’s cinematic vaults. But what saved ‘Killer Tomatoes’ from obscurity was its inclusion in a very influential book: The Fifty Worst Films Of All Time.

The book-fuelled publicity saw the film become a fixture of ‘midnight movie’ slots at independent cinemas and a surprise hit on the (then newly launched) home video market. Eternal cult status was assured. But, you ask, what about the really important question: the calibre of its exploding helicopter credentials?

As police gamely battle the homicidal tomatoes in a field, a small helicopter carrying some random dignitary comes in to land. But as it descends, the tail rotor clips the field surface and breaks off. Instantly, the wounded whirlybird starts spinning wildly before crashing to the ground and tumbling over on its side.

The action cuts away momentarily to a crowd of people running for cover. When it cuts back, the helicopter is already a flaming, molten ruin, with smoke billowing everywhere. Sensing his Oscar moment may be at hand, one character loudly exclaims: “My God! Did you see that? A tomato flew into it!”

Given this is a zero-budget movie with famously terrible effects – remember, it largely revolves around people pretending to be scared of red balls of foam – the chopper conflagration looks great. It is surprisingly, grippingly realistic – as in documentary-level accurate and convincing. And it turns out there’s a good reason for that: the helicopter really did crash and explode.

You see, while the helicopter was merely meant to land in the field, the pilot cocked it all up and crashed the bloody thing. As the giddy cameras whirred, it really did spin violently then roll over on its side.

But here’s the best bit. As genuinely terrified actors disembarked and ran for their lives from the smoking vehicle, which quickly caught alight and erupted in an inferno, the production crew – resourceful as always – hastily sketched out a scene on the spot and improvised some lines around the burning wreckage. Miraculously, no one was harmed in the crash. And with a little quick thinking, the smouldering chopper became just another victim of those deadly tomatoes.

First and only known helicopter destroyed by a tomato.

A ‘before he was famous’ George Clooney has an early starring role in the sequel, Revenge Of The Killer Tomatoes (1988).

Still want more then check out the Exploding Helicopter podcast episode on Attack Of The Killer Tomatoes. Listen now on iTunes, Spotify, Stitcher and all other major podcatchers.

Posted by Exploding Helicopter at 13:03 No comments: