Missing In Action 2: The Beginning 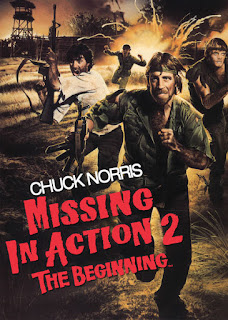 Here’s a simple question: when is a sequel not a sequel? When it’s a prequel, obviously.

But what if that film was never meant to be either a sequel or a prequel – what are we supposed to call it then?

Such terminological philosophising may seem like academic navel-gazing. How, you’re doubtless wondering, could you ever make a film without first knowing what it’s meant to be?

Ah, dear reader. You’re clearly not familiar with the weird history of the Missing In Action series.

The Vietnam War is over, but a group of American soldiers are still held as prisoners of war in a secret jungle camp.

Even though the conflict ended years ago, one dastardly prison commandant (Soon-Tek Oh) is making a point. He won’t release Uncle Sam’s boys until their leader (Chuck Norris) makes a false confession to committing war crimes.

But Chuck is made of stern stuff, his hide as thick as the triple-denim outfits he inexplicably favoured in several of his other movies. The mini-marvel refuses, so he and his men find themselves subjected to a never-ending campaign of psychological and physical torture.

So the grisly stage is set. Will Chuck crack and finally confess under his captor’s cruel crusade? Or can he and his men engineer an audacious escape? Er, yes.

You see, Missing in Action 1 – the film preceding this – was all about an ESCAPED prisoner of war, which does rather give the game away. Literally everyone watching this sequel knows exactly how things will end. Edge of your seat stuff, eh?

Given this film is notionally a sequel, the part of Captain James Braddock is once again played by Chuck Norris - the heroic and inevitably bearded leader of the American POWs.

Never the most verbose actor, our favourite beaver-in-human-form is on peak monosyllabic form here. Entire scenes take place where he does little more than grunt tersely or glower silently at his captors. 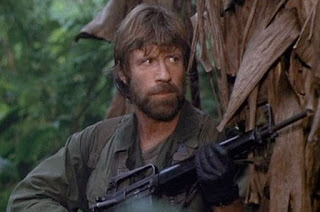 This may sound like harsh criticism, but in fact it’s high praise. Because there is perhaps no uglier cinematic sight than watching everyone’s favourite furry kung-fu pygmy trying to act. As Clint Eastwood’s Dirty Harry famously observed, “A man’s gotta know his limitations.”

Still, that’s not to say that the film is without at least one flamboyant turn. Enter Soon-Tek Oh as the vicious prison commandant, Colonel Yin. While the name may not be familiar, the face certainly will be. Mr Oh spent over 30 years playing a variety of Asian stereotypes in a *ahem* Chinese laundry list of TV shows and films. And his performance here could best be described as ‘stock Oriental villain #3’.

As the dastardly Colonel Yin, Soon-Tek is required to delight in many elaborate displays of cruelty, rage uncontrollably at his subordinates, and twizzle his moustache at the end of every scene.

Viewers of a liberal persuasion will find the performance a painful reminder of a time when Asian actors endured whole careers playing a handful of stock, cardboard caricatures.

Fortunately, we live in more enlightened times. These days, you can find a rich variety of three-dimensional Asian characters in all manner of Hollywood blockbusters. And who could find anything culturally inappropriate in top Manga movie Ghost In The Shell (starring Scarlet Johannsson), samurai classic 47 Ronin (hello, Keanu Reeves) or the Chinese fantasia, The Wall, starring, er, Matt Damon.

Sequel, prequel, what the hell should we call it?

Here’s a brief history of the chronological mess that is the Missing in Action movies. Having secured the services of Chuck Norris, legendarily tight-fisted producers Menahem Globus and Yoram Gohan were convinced that their Vietnam epic was going to be a success.

To save themselves the time, trouble, and particularly expense of returning to make an inevitable sequel, the parsimonious pair decided to shoot a follow-up at the same time. The first film would tell the tale of a brave American soldier who spent years in brutal captivity before escaping. The sequel would show our hero returning to ‘Nam to free other POWs. 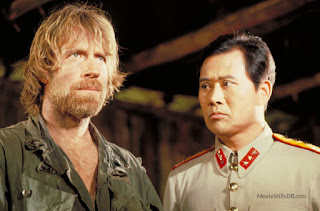 Shooting commenced on both movies. And all seemed to be going swimmingly, until they ruined everything by actually taking a look at the dailies. Because while they had in fact made a very good movie – a bona fide smash, probably – it was the second one that worked. The first movie, the one meant to launch the whole mini-franchise, was a merde-ball, a dog’s dinner, an absolute stinker.

Realising that audiences would never watch their gem of a sequel if they’d been scarred by a terrible first film, the producers hatched a cunning wheeze: simply release the sequel first.

Why is it such a stinker?

What was it about this film that panicked producers so much? Put simply, Missing In Action 2 is possibly the most schizophrenic film Exploding Helicopter has ever witnessed. Individual scenes veer chaotically from daytime soap opera emoting to stomach-churning violence. (Picture Harold and Madge from Neighbours having a delicate squabble over the barbie, then Madge opening her hubby up stomach-to-throat with a flensing knife. It’s that kind of tonally awkward.)

One minute the POWs are swapping tear-jerking stories about their pregnant gals back home, the next Norris is suddenly biting the head off a rat. It’s very disturbing.

Having said that, given the choice between watching Wee Chuck floss his sizeable gnashers with rodent entrails or attempt some more ‘acting’, most viewers would probably choose the furry innards.

Generally speaking, Vietnam War films are a mecca for helicopter fans. You can barely get through five minutes of most ‘Nam movies without hearing the steady ‘thum-thum-thum’ of rotor blades as an open-sided chopper swings into shot. And many end up in flames.

So it’s no surprise to see the film open with our diminutive hairy star and crew flying low above the Vietnamese jungle in a chopper. And even less of a surprise when they come under heavy fire.

The whirly bird is fatally damaged and unable to land, so Chuck and his men bail out – jumping into a river they seem to handily be flying over. Without anyone at the controls, the stricken copter crashes into the ground and explodes – becoming yet another casualty of war.

This is one horrible helicopter explosion. As the aircraft nears the ground, it suddenly disappears behind a very artificial-looking ball of flame.

Clearly embarrassed by the poor quality of his composite shot, the director wisely lingers but a moment on the fiery cloud before cutting away.

You don’t often see pilotless helicopters explode. The only other one that springs to Exploding Helicopter’s mind is in Piranha II: The Spawning.

After the first two films, you’d think it would be hard for the series’ chronology to become yet more convoluted. But that’s what happened with Braddock: Missing In Action 3 (1988).

In Chuck’s third ‘Nam outing, the long years of captivity are altogether expunged from his character’s history. (In a breath-taking flashback, we even see him airlifted home at the end of the war.) Worse, he’s suddenly given a Vietnamese wife and child who have hitherto never been seen nor mentioned, and whose existence flatly contradicts the entire events of MIA 2.

Not since a very-much-alive Bobby Ewing wandered out of the shower in Dallas (rendering the 31 episodes preceding his very noticeable death redundant), has Exploding Helicopter seen such a cavalier attitude to continuity.

You can read a review of Missing In Action 2: The Beginning by our buddies over at Comeuppance Reviews.
Posted by Exploding Helicopter at 21:29 No comments: