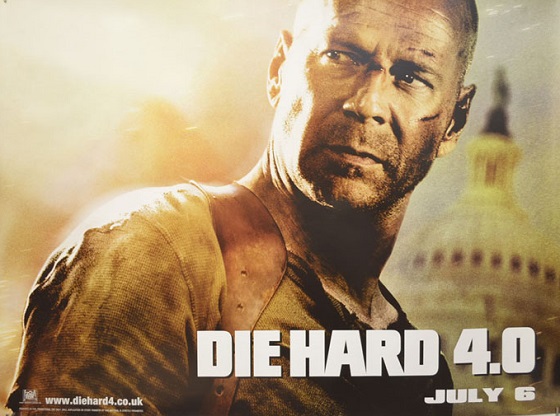 Bruce Willis banks another pay cheque as the Die Hard franchise is given a techno-thriller reboot.
Hollywood’s finest vest wearing action hero crashes through a series of increasingly improbable sequences in a bid to prevent criminals bringing down the US’s computer systems. Oh, and he needs to rescue his daughter as well.
Naturally, the action provides Willis with another opportunity to explode a helicopter. Whilst escorting Justin Long - the irritating comic foil who accompanies Bruno throughout the film - the car they’re travelling in is attacked by a helicopter. Our heroes flee into a tunnel, however, Timothy Olyphant’s dastardly villain uses his internet mastery to create traffic havoc in the tunnel.
After several near death experiences, a riled Willis climbs into a police car and guns it towards the tunnel entrance outside which the helicopter is conveniently hovering. As the car approaches the entrance, Willis jumps clear of the vehicle. Moments later it hits the road’s central reservation causing it to fly into the air and crash into the helicopter destroying it.
A breathless Justin Long surveys the carnage and tells Willis: “You just killed a helicopter with a car.”
“I was out of bullets.” Quips Willis.
Verdict
An unusual helicopter explosion which seemingly crops up out of nowhere.
Artistic merit
Director Len Wiseman keeps it simple. The helicopter blows up amidst a conventional explosion. What imagination has been brought to the scene is contributed by the method of destruction.
Exploding helicopter innovation
There are two noteworthy elements to this chopper fireball. It’s the first time a car has been used as an improvised, surface-to-air missile.
Relevance to plot
The chopper’s presence is justified by the plot. Part of the villain’s plan is to create traffic grid lock in the city. Clearly the villains have planned effectively and made sure that they have suitable transport to remain mobile.
Positives
Having watched hundreds of action films, we’re often able to anticipate how events will pan out. There’s a genuine element of surprise to the circumstances that lead a driverless vehicle into destroying the helicopter as if it were an over-ripe watermelon.
Negatives
The excitement and surprise of the scene though cannot disguise its complete ridiculousness. How does the car continue to race forward with no-one at the wheel or on the accelerator? And how could Willis possibly have worked out the perfect speed and angle needed to launch the car at the chopper? Is he a professor of theoretical physics?
Interesting fact
The exploding helicopter scene took three weeks to film. It was shot practically with CGI only being used toe delete the cables that the helicopter was being suspended from.

Still want more? Then listen to the Exploding Helicopter podcast episode on Die Hard 4. Listen or download the show from iTunes, Podomatic, YourListen or Stitcher.

Posted by Exploding Helicopter at 17:11 5 comments: