The best thing about the epic laziness of Hollywood scriptwriters is that you get to see your favourite chopper scenarios play out over and over again. Don’t believe us? Read on… 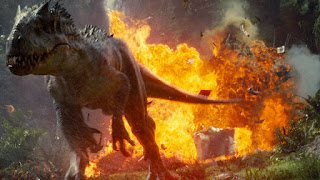 1. Chekhov's chopper.
We’re starting off quite highbrow here, but don’t worry: it won’t last. The concept of 'Chekhov's Gun' describes the playwright’s famous writing advice: “If in the first act you hang a pistol on the wall, then in the following one it should be fired.” In much the same way, if a helicopter is randomly featured or mentioned early on in a film, you can guarantee there will be some rotorised fireball action before the closing credits.

This winning trope emerged in the recent Jurassic World, a film whose hokey plot-lines are so dated they’d make a dinosaur blush. Amid all the unconvincing romancing and high jinx, a character called Masrani is hurriedly established as a trainee helicopter pilot – and even shown doing some wonky flying for a few cheap guffaws. However, chopper combustion fans know this wheeze all too well. Before too long, Masrani is back at the chopper controls just in time to be attacked by pterodactyls and crash to a fiery death through a glass dome. Another great example comes in the lamentable Angels & Demons, where Ewan McGregor's Pope-in-waiting (yes, you did read that correctly) declares for no earthly reason that he used to be a helicopter pilot. Well, of course he was...

2. Watch out for rogue rotor blades.
They’re still spinning! They’re getting closer! Oh my god! Will they stop just in time, inches from the hero’s face? Er, yes. The sight of a crashed chopper’s whirring rotor blades heading menacingly towards a trapped lead actor’s fearful eyeballs has become wearingly familiar over the past 20 years. The original Mission: Impossible had first dibs on the idea, and most would probably agree that Wee Tom's gripping turn remains the standard to match. The trope has since been copied numerous times – notably in The Incredible Hulk – but its days could be numbered.

In Hollywood, one of the clearest signs that an idea has jumped the shark and veered into parody is its inclusion in a Gerard Butler movie. And while nicking the trope for Olympus Has Fallen, Big Gezza performed his signature move of massively ramping up all the stakes while simultaneously sucking out any sense of dramatic tension. And so: humungous whirring blades come whizz-crashing through the ceiling of the Oval Office – yes, the Oval Office – towards a stricken Butler, lying trapped on his back. The punishing blades come spinning down and stop just millimetres away from the porcine Scot’s play-dough features. An audience yawns.

3. Heroes don't look back…
There are some hard and fast rules dictating one’s behavior when walking away from an about-to-explode helicopter in an action movie (see Blue Thunder, Takers and many, many others). Walk with a louche swagger, obviously. Wear sunglasses, if possible. And, it goes without saying, be filmed in slow motion. But you already know the main rule: Don’t look back! Never in Hollywood history has any action star worth their salt cast so much as a single backward glance towards the chopper fireball behind them. It’s just not done.

There are scores of non-looking-back scenes, spanning decades – this really is a classic exploding helicopter trope. But in Exploding Helicopter’s view, the finest example of the form comes early in The Expendables 3, when the geriatric cast - a phantasmagoria of bad wigs, industrial hair dye, age-inappropriate leather clothing and corsets – waddles nonchalantly toward the camera as a palpably CGI fireball erupts just behind them. So ridiculous, it’s almost moving. (Hollywood fact: This epochal scene wasn’t in fact shot in slow motion. That's the actual speed at which the largely septuagenarian thesps were walking.)

4. You can never fly too close…
Exploding Helicopter’s ‘Darwin Award for Squandering Aerial Advantage’ goes to pretty much every chopper pilot who’s ever appeared in a monster movie. You might think it’d be fairly easy to carry out aerial reconnaissance around a building-sized dinosaur, gorilla or other such wonderful creature. Almost by definition, these giants are easy to see from a distance: you could literally fly to the next postcode and still tell whether they, ahem, dressed to the left.

But you can bet Godzilla’s breakfast that any movie pilot in such a situation will feel a pressing need to fly close in under the behemoth’s left armpit for a better look – well within the range of their massive hands, claws, tail or flame-throwing breath. It’s literally the same thing every time. Numerous choppers fly comically foul of the big monkey’s swatting radius in King Kong: Skull Island. Hapless pilots in The Swarm hurtle head-long into a slow-moving cloud of bees. And in Godzilla, a succession of pilots virtually offer themselves up as an all-you-can-fly buffet. In monster movies, one thing you can always depend on is hearing a crackly chopper pilot’s voice saying: “I’m just going in for a closer look…”

5. Stars don’t die in helicopters.
(Note: This is an honorary mention for annoyingly crashed-but-not-exploding helicopters.)

Now, Exploding Helicopter knows a thing or two about chopper crashes. And we can assure you that, explosion or not, this is not a field known for high survival rates. Unless, of course, you’re one of movie’s stars or have a useful expositionary role to play. In which case, there is no deadly chopper crash from which you cannot daintily walk away with just a slightly torn jacket and some artful bruising.

Don’t believe us? Then let’s consider London Has Fallen, where a nasty – but non-explosive – helicopter crash leaves supporting star Angela Bassett fatally skewered through the gut, while Big Gezza Butler (yes, him again) and Aaron Eckhart are left literally ready to sprint away from pursuit then duff up loads of baddies. Or what about Suicide Squad, where a truly horrific, multi-block chopper tumble leaves an assortment of no-name extras interestingly kebabbed by sharp, deadly bits of wreckage. But wait: could that be all the heroes and plot-critical characters – including, yes, Viola Davis wearing a business suit and heels – sauntering out as if they had merely been on a bus that had pressed its brakes a little too sternly? Yes, it could. It absolutely could.