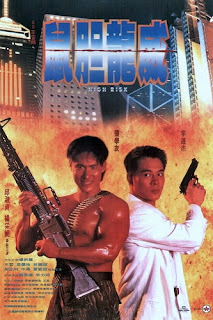 You’ve probably heard of ‘diss tracks’ – hip hop songs where the primary aim is to verbally attack or ‘disrespect’ another artist.

For years, these songs were seen as mundane exercises in put-downs and point-scoring – bouts of schoolyard posturing from showy characters with brittle egos. But then one verbal joust between Tupac Shakur and Biggie Smalls sparked a series of shootings that left both men dead, and suddenly the jingly japes didn’t seem quite so hi-larious.

Still, the tradition did live on in other ways. And High Risk (1995) can lay dubious claim to being an actual ‘diss film’. The moviemaker behind it – renowned Hong Kong producer, Wong Jing – really did carefully shape the movie’s content to construct a new (and unwelcome) orifice for legendary martial artist, Jackie Chan, while also eviscerating his action man credentials.

The score-settling result is a savage – and surprisingly effective – send-up of the cinematic chop-socky star. What you might call a kung fu kick in the reputational goolies.

Frankie Lane is a martial arts movie star famous for doing all his own stunts. (Remind you of anyone?) But in reality – or the reality of High Risk - Frankie can’t be bothered with the rough stuff, so secretly delegates all the dangerous stunts to his bodyguard. Ouch.

Unfortunately for Frankie, an ambitious news reporter has cottoned on to his fraud and is threatening a television expose. Then, just when it seemed his day couldn’t get any worse, our hero finds himself trapped in a skyscraper that’s been taken over by terrorists. Crikey!

The backstory to the beef

To say the Frankie Lane spoof of Jackie Chan is a bit ‘on the nose’ would be a gross understatement. (For a western equivalent, imagine watching a movie about a musclebound Austrian coward who’s scared of guns and loud noises, and called Harold Schwitzaneuger. You get the idea.) But why is everyone’s favourite, rubbery-faced risk-taker being portrayed in such an unfavourable light?

The answer lies in a movie that Wong Jing and Chan made together a couple of years earlier: City Hunter (1993). Envisioned as a triumphant collaboration between two titans of Hong Kong cinema, the production quickly deteriorated into furious rows and on-set shouting matches – and Chan even tried to get Wong booted off the movie.

Despite their feuding, the project did get finished – even if it was to no one’s satisfaction. (Years later, a still disgruntled Chan described it as the worst film of his career.) For Wong though, revenge was a dish best served in celluloid. And when he made High Risk – a formulaic Die Hard knock-off – a couple of years later, he saw an opportunity to get even with his former foe.

A study in character assassination

Playing the role of Frankie, Jacky Cheung presents an instantly recognisable caricature of Chan. With his mop-top hairstyle, bumbling manner and exaggerated facial expressions, he neatly skewers Chan’s clownish screen persona. Worse, Frankie is portrayed as a womanising drunk and coward no longer willing to do fight scenes or his own stunts, due to years of soft living. Miaow!

It's raucous stuff and, for the most part, hugely enjoyable. But there’s one slight problem: Wong’s obsession with settling an old score ends up unbalancing the rest of the story. And that’s because Cheung’s Chan-baiting character, who dominates most of the screen time, isn’t actually the film’s hero.

That role falls to Jet Li, who plays Frankie’s bodyguard and unofficial stunt double. So, it’s the pint-sized pugilist who leads the hostage rescue, does the heroics, and ultimately kills the villain – you know, standard movie hero stuff. But his character is continually side-lined throughout the film, so Wong can pour yet more merde on the Chan character’s head. To illustrate: think of Die Hard’s terrorist negotiating yuppie sleazeball Ellis. Now, just imagine if he had been given as much screen time as Bruce Willis, and you’ll see the problem.

Still, this is a minor quibble about what is unquestionably a wildly entertaining film. Ultimately, Wong presents grandly staged action sequences, cartoonish villains, and a deliciously acerbic critique of a cinema superstar. It’s a spectacular feat.

And it’s worth dwelling for a moment on the singular nature of the filmmaker’s accomplishment. Despite being full of preening narcissists and swivel-eyed sociopaths (‘Hello, Harvey!’), the movie industry resolutely keeps its axe-grinding out of public view, instead presenting a vision of a world where everyone is super-fun to work with and simply a ‘dah-ling’.

In that context, it took enormous chutzpah for Wong to make a major motion picture which had the explicit purpose of exacting personal revenge against an A-list colossus of the industry. That’s putting some serious cojones on display…

While Wong’s primary interest was clearly in obliterating Jackie Chan’s reputation, it’s nice to see that he also found time to do some truly horrific damage to a whirlybird.

Here’s what happens: with the terrorists in control of the skyscraper, Jet Li hijacks a police helicopter – which of course, he can effortlessly pilot. As he ascends to the floor where the hostages are being held, the villains open fire, so our hero makes an improbable leap from the chopper onto a window ledge. The result? The pilotless copter crashes through the window, exploding multiple times as the wrecked fuselage skids across the floor.

Excessive, extravagant, entertaining and extremely unlikely. It’s a bravura scene, in which the helicopter not only explodes multiple times, but we also get to see a baddie cut clean in half by a rotor blade. Huzzah! Added bonus: the viewer is treated to a frankly weird ‘point of view’ shot from the helicopter as it careers out of control and in flames. Encore, Mr Wong! Encore!

We’ve previously seen helicopters crash through the inside of buildings – in Heaven’s Fire, Golgo 13: The Professional and American Heist. But this one is a real doozy.

Such was the aggravation caused by High Risk that Jet Li subsequently felt moved to apologise to Jackie Chan for his involvement in the film.

Posted by Exploding Helicopter at 17:53