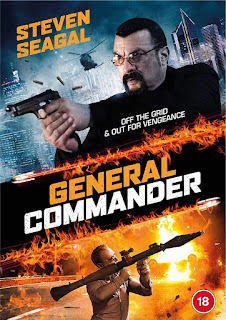 In the motor trade, they call them a ‘cut and shut’: a scam where you take the remains of two wrecked cars, weld them together, then flog the newly created ‘vehicle’ to an unsuspecting punter.

Obviously, the workmanship of these Franken-motors is criminally substandard and likely to cause serious harm to anyone encountering them. But, don’t expect the fraudsters to care. They’re just out for a quick buck.

Such unscrupulous behaviour was doubtless the inspiration for the recent Steven Seagal vehicle, General Commander (2019).

At first glance, it appears to have the bodywork of a functional action film. But lift the bonnet, and you realise with horror that bits of a TV series have been clumsily welded on to a movie format in such a hap-hazard fashion it should be immediately consigned to the scrapheap.

But before we explore our automotive analogy further, let’s kick the tyres of the plot...

Big Steve leads a team of CIA agents who are trying to bring down a global crime syndicate. But when the bust goes wrong – and one of the aikido arm-waver’s buddies is killed – the agency moves to shut down the investigation and disband his unit.

Appalled by the decision, the Putin apologist and his comrades quit, so they can mount their own vigilante operation to stop the mobsters and avenge their dead chum.

So, with Seagal and his friends having put themselves Above The Law, the only questions we need ask are, who’s going to be Hard To Kill and which baddie is Marked For Death? (See what we did there?)

Cut and shut: the movie

One question that cineastes across the globe would surely be asking about General Commander, if any had bothered to see it, is this: How did the movie manage to become such an unsightly mess – the cinematic equivalent of a Range Rover engine crammed onto the chassis of a Mini Metro?

Turns out there’s a simple answer. Although Big Steve’s latest opus has been released as a movie, the project actually started life as a 12-part TV series. But with just two episodes in the can, the whole shebang was mysteriously abandoned.

No official explanation was offered. And it would take a much harsher critic than Exploding Helicopter to draw any link between this sudden shelving and the unsavoury sexual assault allegations swirling around Seagal at that time.

Nevertheless, the costly cancellation left producers with an expensive problem. Having already sunk thousands into the production, how could they salvage some quick cash from the wreckage?

Their solution was worthy of Arthur Daley himself. They would simply bolt the existing footage together and try to pass it off as a complete film.

Unfortunately for them (and not to mention the viewer), there’s no disguising the shoddy workmanship here. All the awkward joins and lapses that come from shunting together disparate scenes are clearly visible. The exposition-heavy plot lurches along like a car with a clogged fuel line. And the all-too-scarce action scenes are as exciting to watch as a traffic jam.

Faced with such dire fare, the disappointed viewer must look elsewhere for entertainment. And sadly for the Buddhist-botherer, there’s nothing more riveting in this parade of dreck than the increasing absurdity of his follicular arrangement.

Seasoned Seagal watchers well know that the great man has long employed tonsorial enhancement measures. (The receding hairline he sported in debut Above The Law had mysteriously disappeared by break-out hit, Under Siege.) But like Michael Jackson and his nose, the famously vain martial artist has never been able to stop surgically fiddling with his barnet.

Modern science may never be able to unravel the exact combination of transplants, plugs and weaves that went into creating the Seagal barnet. But be assured: the wiry, brillo-like substance currently perched atop his head is unlike any other Earthly hair form. More than anything, it resembles the black skull cap favoured by intergalactic dictator, Ming the Merciless. (And we all know how much Steve, a noted Putin-botherer, enjoys a little tyrant time.)

However, with a 70th birthday fast approaching, it appears that Seagal’s extraordinary plug-weave-wig-monster has finally allowed a single concession to the passage of time. Whisper it gently, dear reader, but there are now actually small patches of silvery white dust along the sides of his otherwise obsidian crown.

It’s an almost touchingly pathetic gesture towards verisimilitude, like putting pieces of coal on a snowman’s face and expecting it to talk. And of course, it does not work. The idea was clearly to lend the big man a slightly distinguished air. But in reality, it looks like he lost his balance in a grocery store and crashed into the talcum powders.

Putting tonsorial tomfoolery aside, let’s get down to the serious business of exploding helicopters.

Having finally tracked the villains down, Seagal and his team engage in the obligatory final confrontation. This involves a car chase and a gun battle during which a helicopter appears because… well, who knows? (By this point, Exploding Helicopter had long since stopped trying to find any logic in the proceedings.)

While taking heavy fire from the chopper, one of the good guys pulls out a rocket launcher that happens to be sitting in the boot of their vehicle.

He fires at the whirlybird, which explodes in a far from convincing CGI fireball. As our hero admires his pyrotechnic handiwork, he yells, “Merry Christmas, motherfucker!” And seasons greetings to you too, sir!

Overall, it’s perfunctory stuff. Only the foul-mouthed (and festive-themed) one-liner manages to perk up the mood – but that line, like much else in the film, is totally baffling.

You see, at no point during the previous action has it ever been established what time of year it is. And given that the film is set in the broiling Philippines, Christmas is ho-ho-hardly the first thing on the viewer’s mind while sitting through this nonsense. (Presumably, the Christmas references ended up somewhere on the cutting room floor.)

The credits provide further tortured evidence of the struggle it took to re-fashion General Commander into a film. Despite a listed running time of 85 minutes, this film actually lasts just 76 minutes.

And those extra nine minutes..? Desperate to fill out time, the director has pointlessly regurgitated bits of the film you’ve just watched as a backdrop while the end credits (a hall of shame for everyone involved) slowly scroll up the screen.

Check out the review of General Commander by our buddy the DTV Connoisseur.

Posted by Exploding Helicopter at 12:10