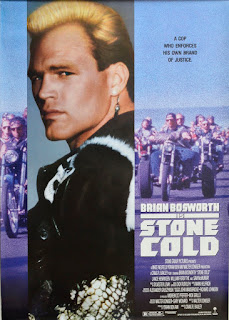 Hollywood has a long and proud tradition of improbably turning American footballers into actors.

Perhaps only in the City of Dreams could someone watch a hulking NFL player lumber their way monosyllabically through a post-game interview and think: Hey, he’d be great in the movies!

But that’s what happens. The trend started way back in the Sixties with Jim Brown, often considered the NFL’s greatest player. Big Jim menaced his way through such gems as The Dirty Dozen, Ice Station Zebra and The Running Man after retiring from the game.

More interesting is the case of OJ Simpson. For many years, the former running-back enjoyed a long and largely undistinguished screen career. Or at least until real life intervened. After his ex-wife and her friend were murdered, Simpson suddenly found himself the star of his own a televised legal drama.

Fortunately, The Juice had saved his most convincing performance in front of a camera for an LA courtroom. Most observers thought his role as an innocent man impossible to pull-off. Luckily for him the jury begged to differ.

All of which, by way of roundabout introduction, brings us to the big, brash, mullet-king: Brian Bosworth. When injury prematurely ended the career of this colourful Seattle Seahawks line-backer – equally beloved and loathed by a nation’s sports fans – Tinseltown naturally tapped him up for an ‘acting’ career.

So let’s head down to the line of scrimmage and get ready to tackle the Bozza’s big screen debut, Stone Cold (1991). 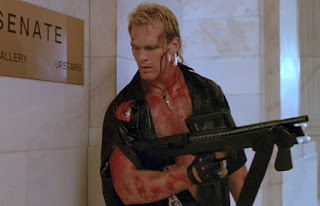 Brian Bosworth plays Joe Huff, a maverick cop who - in a stunning twist on genre conventions - plays by his own rules. Big Bri’s unassailable position on the maverick-ometer is quickly established by the fact he wears a leather jacket, rides a motorbike and has a komodo dragon as a pet. You get it, right? He’s like totally craaaazzzeeeee man!

He’s also the policeman with the most biker-related arrests in Alabama. (Apparently, law enforcement officials keep extensive statistics on these things.) This makes him the perfect man to go undercover with the Brotherhood, a bunch of white supremacist Hells Angels who are up to their necks in drugs, prostitution and murder.

After infiltrating the gang (a cunning ruse that involves our Bri just turning up at a bar dressed in his own clothes), Bosworth learns that they’re planning to assassinate a politician who has promised to crack down on the biker problem.

As plots go, tough-guy-goes-undercover-with-more-tough-guys is hardly epoch-breaking territory. ‘Acting’ is not a big priority here. But then, this is a movie starring a violent redneck who had literally spent the past decade listening to nothing more sophisticated than a quarterback shouting out random numbers on a scrimmage line before he punched people. What were you expecting: Sense and Sensibility?

Given no-one outside the US cares about American football, you’ve probably never heard of Brian Bosworth.

The Boz, as he liked to style himself, was a colourful and controversial gridiron star in the Eighties. Famous for outrageous hairstyles, trash-talking opponents, and countless run-ins with authority, the mullet-haired meathead was one of the game’s most recognisable faces.

So in many ways, Stone Cold was the perfect vehicle for him. Playing an insufferable attitude monster with a preposterous haircut wasn’t really a stretch even for Bri’s modest acting skills, which is just as well. As a bitchy English thesp might put it, he lacks ‘range’.

Still, he does an excellent job in this movie – assuming, of course, you define excellent as mouthing your words in broadly the right order and not tripping over the furniture. Remember: these were the early Nineties, when many of the era’s top action stars – Arnie, Dolph, Sly, et al – literally couldn’t manage a comprehensible sentence. (‘Hay-dree-ennnnnne!’ ‘Ah’ll bee beck!’ ‘Yu vill looze…’). Judged against that incredibly low bar, Bosworth comes across like Sir Laurence Olivier, though admittedly with Hulk Hogan’s haircut. 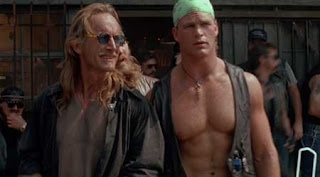 The biker gang’s leader is played by B-movie legend, Lance Henriksen (forever typecast as Sigourney Weaver’s creepy android pal from the Alien films). With his cadaverous, unconventionally handsome face, and cigar-smoke smooth voice, Lance is one of those rare actors who can effortlessly convey both menace and charm. And he can chew scenery with the best of them.

One minute he is cackling wildly with his biker buddies, the next he’s malevolently mangling a man’s hand in the spinning wheel of a motorcycle. If acting were a McDonald’s menu choice, Lance definitely chose to ‘go large’.

And if that isn’t enough overacting for you, further colour is provided by William Forsythe as Henriksen’s mentally unhinged right-hand man.

Along with Gary Busey, Bonkers Bill was one of the twin titans of Nineties ‘screen crazy’. When a film needed someone who could lose their shit in an entertaining way, they were the men casting agents called. (At least until Nicolas Cage cornered the market)

And Forsythe is in prime ordure-scattering form here, snorting, swearing and sneering his way through the film like a coked-up Tasmanian Devil. Indeed, such was Boardwalk Empire star’s commitment to authenticity he refused to wash his clothes during the film’s four month shoot. By the end, the King of Screw-loose’s trousers were as pungently over-ripe as his performance.

By rights, Stone Cold should have been a disaster. After four weeks of production, original director Bruce Malmuth (Hard To Kill) was fired and everything filmed to that point was junked.

But cometh the hour, cometh, er, the stuntman. Into this chaos stepped veteran stunt coordinator and occasional director Craig R Baxley, the film’s true hero. Behind schedule and already way over budget, Baxley decided to take a radical, albeit simple, approach. 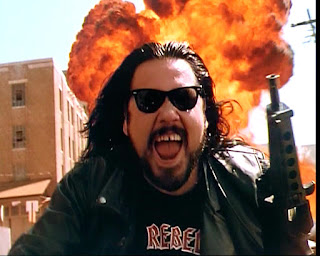 Turning up on set, he informed the cast and crew that they were going to “blow shit-up and kill people until all the money runs out”. (This was a strategy that may have lacked finesse, but certainly not clarity).

Judged against that mission statement, Stone Cold is an unqualified success – for this is one of the most conflagration-filled films Exploding Helicopter has ever witnessed.

No single opportunity to blow up a car, truck or motorcycle is missed. Even an innocuous looking fender-bender is enough to send the vehicles in this movie erupting into fiery piles of debris. And

even on the rare occasions when vehicles manage to avoid other traffic, there’s always a handy petrol station for it to crash into. (Some tropes never get old).

And that’s the point, really. Stone Cold may be just another derivative and clichéd cop movie, but it serves up the genre’s well-worn conventions with real gusto and a nitro-glycerine-soaked brio. The whole thing is best approached as a sort of action film cartoon. Just sit back, unplug your brain and enjoy.

Exploding Helicopter feels it best to spare the reader the intricacies (and indeed inanities) of how we reach the film’s crucial scene. Suffice to say, we’re on the fifth floor of an office building and there’s a motorcycle speeding down a corridor towards a window. In case you haven’t guessed, outside that window is a helicopter and a regulation dim-witted pilot.

Before the viewer can ponder just how unlikely this set of circumstances is, the iron horse smashes through the glass into the whirlybird, which instantly explodes.

Evel Knievel, eat your heart out.

If there is a finer sight in movie history than watching a helicopter being fierily brought-down by a flying motorcycle, then Exploding Helicopter would like to know about it.

The use of a motorcycle as a vehicular cannonball is truly inspired. Without question, one of the all-time great helicopter explosions.

First known use of a motorcycle to blow-up a helicopter.

The only other example Exploding Helicopter is aware of is in The Expendables 2 where Sylvester Stallone uses a dirt bike to shoot down a bothersome gunship.

A variation on the form can be seen in Die Hard 4.0, where Bruce Willis destroys a chopper using a police car as an improvised projectile.

The one-liners in Stone Cold are distinctly hit and miss, but Bosworth gets this bona fide corker as he’s about to administer the last rites to Lance Henriksen: “Imagine the future, because you’re not in it.”

Still want more? Then check out the Exploding Helicopter podcast on Stone Cold. Listen to it on iTunes, Stitcher, Acast, Podomatic, or YourListen.

Posted by Exploding Helicopter at 14:36