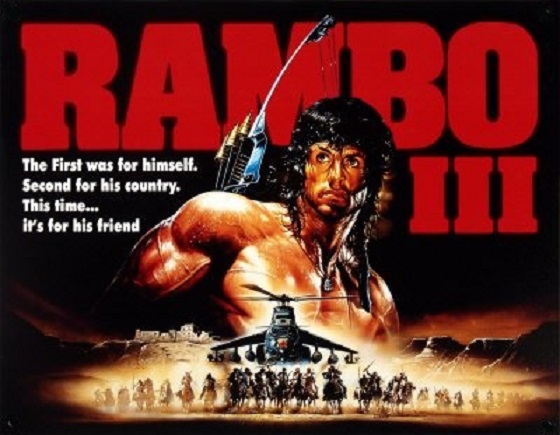 With his most impressive mullet yet, Sylvester Stallone returns to the role of Rambo in this bloody and anachronistic sequel.
Shell-shocked by the body count of his previous movies, everyone’s favourite Vietnam veteran is living in self-imposed exile in Thailand. There, he tries to heal his war traumatised psyche by working as a handyman for Buddhist monks while beating up the locals in stick-fighting matches.
But our bandana-wearing hero is reluctantly coaxed out of retirement when his mentor Colonel Trautman (Richard Crenna) is captured in Afghanistan.
This is the cue for Rambo to launch a one-man rescue mission that pits him against the might of Russian army. Naturally, as this is the movies, Sly emerges from the inevitable maelstrom of violence with little more than a bandaged hand.
The most interesting aspect of the film though, are its Cold War politics. The Afghan Mujahedeen are portrayed as friends of the West, down-trodden warriors bravely battling against imperialist forces.
Who could have predicted that, scarcely a decade later, America would be taking the place of the Russians and invading the country themselves. Oh, how times change.
Exploding helicopter action
So, to the exploding helicopters. And make no mistake, this film is an absolute chopper-fest with no fewer than four exploding helicopters to report.
Rambo’s first demolition job comes in the rebel camp when a squadron of helicopters attack without warning. Rambo spots an unmanned gun turret and sprints through the carnage whilst being strafed by bullets. He spins the gun around and despatches the chopper in a brief but satisfying explosion.
Later Rambo manages to infiltrate the landmine strewn compound where Trautman is being imprisoned and tortured (they lift him off the floor by his arms, ooh painful), but fails to free the colonel despite standing right outside his cell door.
Rambo flees in a huge Hind Mil Mi-24 helicopter gunship which is peppered by gunfire and slowly starts to lose altitude. He crash lands but the helicopter doesn’t explode until Rambo and the rescued prisoners are at a safe distance. As Rambo runs away from the wreckage, he is silhouetted against the explosion in classic Hollywood style.
A glutton for punishment, Rambo goes back to the fort to finish the job, this time successfully, with Trautman in tow. He flees on foot this time and is shot at by more helicopters. Rambo pulls out his bow and explosive tipped arrows. He pops up from behind a rock and wham, copter number 3 goes down in a blaze of glory. Nice cheesy shot of pilot pulling a “What the….?!” face just before he is blown to smithereens.
For the film's climax a cornered Rambo and his Mujahedeen friends take on the Russian army with a few mangey horses and rusty sabres. Rambo steals a tank and plays chicken with another massive Hind piloted by the crazed Russian commander. There's hilarious close-ups of both protagonists as they collide in the mother of all explosions. Rambo walks away but his Russian friend isn’t so lucky.
Artistic merit
Director Peter MacDonald has to be given credit for the sheer scale of his exploding helicopter ambition. This is war and all the explosions look genuine, substantial and mercifully free of CGI which is the scourge of the exploding helicopter set-piece.
Exploding helicopter innovation
It’s not every day a tank plays chicken with a helicopter. It is utterly preposterous but a fitting climax to the movie.
Do passengers survive?
This was the 80’s. All the bad guys die in their copters but when Rambo’s chopper goes down it gives him and his passengers ample time to escape as it takes over 10 seconds to explode - despite crash-landing on rock and being covered in highly volatile missiles.
Positives
You just don’t this amount of exploding helicopters in Harry Potter.
Negatives
With wall-to-wall helicopter action it would be churlish to dwell on the negatives. However, the final denouement is so ridiculous I had to choke back my hoots of derision. Why doesn't Zaysen just launch a whole bunch of missiles from a safe altitude? This was the 80’s though, normal rules do not apply.
Favourite quote
Zaysen: “Who do you think this man is, God?"
Trautman: “God would have mercy. He won’t.”

Posted by Exploding Helicopter at 09:34