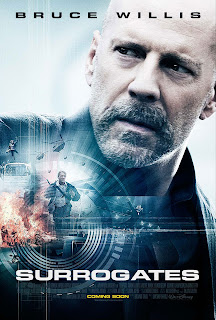 Imagine a world where you can sit on your arse all day in the comfort of your own home and get someone else to do your work for you. Sounds great doesn’t it?

In fact you could argue that people living on benefits in this country currently enjoy this luxury (ooh, little bit of politics there). But wouldn’t there be a price to pay for creating a bland and safe facsimile of society? What would happen to our self-esteem and social skills? Wouldn’t we all just end up sitting around in our pants, stuffing our faces with crisps, looking like Elvis circa 1977?

This is the dystopian future envisioned by Jonathan Mostow in the surprisingly cerebral sci-fi actioner Surrogates (2009). In the future people don’t go out in the real world. Instead, they sit at home, remotely controlling idealised robotic versions of themselves, living out their lives vicariously through these “surrogates“.

Tom Greer (Bruce Willis) is one such sluggard. He’s an FBI agent called in to investigate the deaths of two people who mysteriously die when their surrogates are destroyed - something that should be technically impossible.

Greer’s sleuthing leads him to the anti-surrogate movement whose leader The Prophet (a bizarre mix of Bob Marley and Martin Luther King, played by a virtually unrecognisable Ving Rhames) wants to wipe out surrogacy. He wants to get everyone back to experiencing life directly, or at least washing once a month.

But, just in the same way you can never be sure that the 18-year old underwear model you think you’re talking to in a chat room isn’t a 44-year old truck driver from Burnley, nothing is quite what it seems. Slowly Greer realises the murder is part of a vast and terrible conspiracy.

In a genre dominated by dumbed down studio fare with no intellectual returns, I found Surrogates to be an unexpected pleasure. The film reunites the team behind Terminator 3, writers Michael Ferris and John Brancato, along with director Mostow. They create a fully realised, plausible universe with great touches such as robots “jacking” with electronic “drugs”, beauty salons that resemble garages and roadside surrogate battery chargers.

Willis is not his usual bullet proof self and shows a refreshing vulnerability when dealing with some of the movies philosophical themes. Similarly, his flawed relationship with his wife Maggie (Rosamund Pike) elevates the film above the standard sci-fi action fare that normally relies on fancy effects and a blue tint for its authenticity.

Mostow keeps the action moving and at an economical 90 minutes the film doesn’t outstay its welcome either. Fortunately, amidst all the futuristic fun there’s still time for the retro thrills of a helicopter explosion.

Willis is in a police chopper tracking the murder suspect. The police on the ground move in and corner the suspect not knowing he is in possession of a developmental weapon which has the ability to kill people through their surrogates. After using it to wipe out the pursuing police the weapon is unleashed on chopper, overloading the pilot’s circuits and blowing his eyes out. 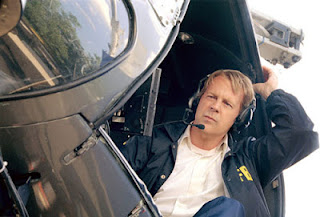 The out of control chopper spins wildly for what seems an eternity, clips the top of a building, before crashing down, flipping over like a child’s toy until it explodes.

Whilst you have to appreciate the way Mostow’s prolongs the suspense, the helicopter was only ever heading one way - and that was down.

The crash itself looks surprisingly cheap and CGI’d compared to some of his previous efforts. The washed out yellows looked uncannily like the old Amiga game Persian Gulf Inferno.

Survive is perhaps not the most apt verb in the scene is a robot. The chopper pilot does not surface after the fireball but Willis escapes with his arm torn off seeping some sort of green fluid which may or may not be absinthe.

The fact that in this fantasy world everyone has flawlessly beautiful surrogates to hide the fact that in the real world they are so ugly they couldn’t get a date from a calendar is a concept anyone familiar with Second Life will well appreciate.

As with most sci-fi you can pick holes in the minutiae until the cows come home. Why, for example, have coffee shops for robots that don’t need to drink coffee? Don’t be a smart arse, its called artistic licence.

I won’t spoil it for you but the dénouement is too farfetched to be plausible for such a massive company with undoubtedly hundreds of fail safes to prevent their units from malfunctioning on a monumental scale.

Female Lawyer: Agent Greer, we're not doctors. Tom Greer: Honey, I don't know what you are. I mean, for all I know, you could be some big, fat dude sitting in his arm chair with his dick hanging out.

Oddly, Disney did not hold any press screenings for Surrogates. This is normally the sign of a studio in full damage limitation mode with an absolute turkey on their hands that they don’t want universally panned before it’s had a chance to see the light of day.

Perhaps Disney should have had more faith as subsequent reviews have been, at worst, “mixed”. Disney’s failure to back a sci-fi film with brains does the film and the movie industry in general a disservice.

The future isn’t particularly dangerous, in fact crime is virtually non-existent, but there is no underestimating mankind’s desire to do as little as possible. First came the remote control and now this.

Posted by Exploding Helicopter at 22:39