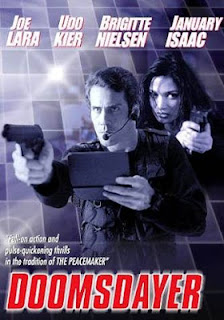 For every hero, there must be a villain. And, as the cinematic canon expands, the need for ever more colourful baddies – with grander and more ingenious schemes with which to threaten the world – only grows.

Bravely rising to this challenge, Hollywood has exploited every possible reason and unlikely motive for villainous skulduggery, giving us a memorable rogues’ gallery of scoundrels in the process.

We’ve had terrorists out for a spot of nuclear blackmail (think Art Malik in True Lies), disgruntled ex-employees out to avenge themselves with oriental elaborateness on their old boss (Javier Bardem in Skyfall), even attempts by intergalactic-beings to enslave the human race (Terence Stamp in Superman II).

Why, we’ve even seen Nazi war criminals try to recreate the Third Reich by populating the world with infants cloned from Hitler (hats off to Gregory Peck in The Boys From Brazil, featuring a plot so epically bonkers you almost want it to succeed. Well, almost).

So where could Hollywood’s dark, twisted imagination go next? Surely the pool of poisonous evil-doers intent on destroying the world has been exhausted?

Oh, happy day – it is not so. There does remain, it would appear, one last group whose potential for unspeakable evil has yet to be utilised on celluloid. A twisted coven whose veneer of respectability harbours a secret desire for global Gotterdammerung.

But who are these evil masterminds, I hear you ask? Well, let me tell you. They are…philanthropists.
Yes, that’s right: philanthropists. Do-gooders. Charity types. People with spectacles and no shoulder muscles. Who, according to Doomsdayer (2000), apparently want to tear the world apart – presumably between tea breaks and reading The Guardian.

Nothing to worry about there, you might think. But unfortunately, the world’s population are proving to be an ungrateful lot. And, much to Gast’s frustration, they’ve continued waging deadly conflicts and plundering the planet’s resources.

Now, men of more limited imagination would simply mutter bitterly about the ingratitude of mankind, put away their cheque book and get on with racking up a few more ka-squillion quid.

But our Max isn’t afraid to think big, and instead conceives of a bigger and altogether more radical plan. The basic idea, taken from page one of the Megalomaniac’s Guide to Really Getting Your Point Across, is thus: to create, first one must destroy.

To this end, Gast develops the ‘doomsdayer’ – a device capable of causing the simultaneous meltdown of every nuclear weapon and power plant on Earth. According to Gast’s wonky logic, the few thousand souls who manage to survive the subsequent cataclysmic Armageddon will be so chastened by the experience, they will build a new, better world - one more in tune with his own utopian vision.

It’s a lot to take in. And if you’re struggling to get your head round the rotten madness of this idea, just try and imagine Bill Gates suddenly deciding: ‘To hell with curing polio, what I really want to do is blow everything up, kill billions of people, and keep my fingers crossed that somehow magically solves everything‘. Think of it as a kind of ‘control, alt, delete’ moment for the human race.

Fortunately, a secret security unit run by the United Nations learns of Gast’s plans. Naturally, given the literally world-threatening nature of the evil plan, they opt for a softly-softly approach and send their top agent Jack Logan (Joe Lara) to infiltrate Gast’s base and stop the launch of the ‘doomsdayer’.

With a villain this unlikely, it’s obviously going to take one hell of an actor to sell the whole lunatic premise to the viewer. Luckily, in Udo Kier (Blade, Iron Sky), Doomsdayer has the perfect salesman for the job.

With an eerie, aloof demeanour, Kier delightfully portrays his character’s slowly-pickled evil.  His mellifluous German accent and purring delivery are wonderfully complemented by his pale grey eyes, which have all the humanity of a paving slab.

There’s an excellent scene early in the film where Kier chairs what turns out to be the final (in fact, very final for some) meeting of his charitable foundation. After running through its assorted failures, he outlines with chilling placidity his ‘doomsdayer’ scheme to the assembled trustees.

The earnest charity types are naturally appalled and start to protest. But Kier – having no further use for them – has had the forethought to poison their drinks. Before they can start droning earnest objections to his homicidal scheme, they all slump down dead on the boardroom table. It’s a hell of a way to chair a meeting. I guess they should have read the agenda more carefully.

Unfortunately, the vivid camp of Kier’s performance contrasts sharply with the hero, here played by Joe Lara. He’s a thoroughly bland presence. In fact, he rather started to remind me of a toaster: something that pops up every couple of minutes with a dry, plain, and unutterably dull product.

Still, aside from saving the world, Lara does serve one useful function in the film – and that’s to help explode that all important helicopter.

Trying to break into Gast’s headquarters, Lara is discovered and pursued by the villain’s private army. To stop the pesky protagonist, Gast despatches his attack helicopter – the sexily named Black Widow.

Quite why the chopper is called the Black Widow is somewhat mysterious. Not least because said whirlybird is completely white in colour. Anyway, the viewer has little time to quibble over this as the chopper fires a succession of rockets at Lara, who tries to escape in a truck.

It looks like only a matter of time before our hero is cremated. But luckily, the Black, White or Whatever Widow is fitted with a remote control, the purpose of which (like the confusing colour of the livery) remains obscure.

Still, said device does allow Lara’s buddy to hack into the chopper’s controls and command it to dump all its fuel. Sans petrol, the pursuing chopper plummets from the sky and crashes into the ground. No more Black Widow.

Disgraceful. Despite an impressive amount of pyrotechnics throughout the film, the producer’s piggybank was clearly empty by this point.

Given that they couldn’t even afford a coat of paint to make their white helicopter look a little more, well, black, there was obviously little prospect of them being able to afford to blow the thing up properly.

To avoid showing a crash or explosion, the director cuts to what’s supposed to be the view from the helicopter’s cockpit. We see trees rushing towards the camera, while some poorly dubbed in, off-camera voices shout in fear, before we cut to a generic explosion which we‘re supposed to believe is the helicopter exploding.

It’s a sorry, shoddy, sequence. In the general canon of chopper fireballs, Doomsdayer stands out as a larcenous crime, a permanent stain on the rich tapestry of cinematic helicopter explosions. Shocking.

The destruction of remote-controlled helicopters is not without precedent. We’ve previously seen it in Arnold Schwarzenegger’s cloning thriller The 6th Day and dire sequel Lawnmower Man 2.
But in the Black/White Widow, we do have the destruction of the most misnamed helicopter of all-time – a first of some sort.

Time was that no car chase would be complete without one of the pursuing vehicles smashing into a petrol tanker that just happened, with startling convenience, to be pulling out of a side road. This generic trope provided the perfect excuse to deliver many an audience-pleasing huge explosion.

Sadly, there then came a time, around the mid-Nineties, when even Hollywood – never usually overly embarrassed on the subject of clichés – felt even they couldn’t get away with that one anymore.

So, imagine my retro delight when Doomsdayer served up a superb, late example of the art, having a car crash into a fuel truck which was inexplicably parked in the middle of nowhere. Some pleasures never get old.

Brigitte Nielsen plays Gast's wife and co-conspirator in the ‘doomsdayer‘ scheme. Unquestionably a striking beauty in her Eighties heyday, the Teutonic Titaness always had an imposing physique which made her look just a little bit like a man.

Made at the turn of the millennium, there's noticeable rust round the Nielsen chassis. It’s probably the last time we see Brigitte before her looks completely disintegrated into the ‘Dolph Lundgren in drag’ look we know and love today.

Grizzled general then replaces handset, before announcing to the surprise of no-one: “That was the Prime Minister.”

Review by: Jafo
Posted by Exploding Helicopter at 18:35