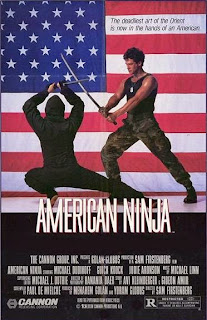 “Ninjas, thousands of ‘em.” As Michael Caine might have observed had he ever visited a video shop.

That’s because during the Eighties VHS boom, video store shelves groaned under the accumulated weight of films with titles like Ninja Dragon, Ninja Terminator and Ninja Hunt. Or Bionic Ninja, Clash of Ninja, Rage of Ninja…..you get the point.

Suffice to say, filmmakers' imaginations were limited only by the number of verbs and adjectives that could be sensibly (and in many cases, not so sensibly) bolted to the magical ‘n’ word.

Sniffing the opportunity to make a quick buck, those masters of action exploitation the Cannon Group came up with a cunning plan. Why not give the oriental, black-clad, stealth assassin formula a stars ‘n’ stripes makeover? And so the American Ninja (1985) was born. Hii-yaa, motherfucker.

Michael Dudikoff, a star of the VHS action era, plays an army private with a mysterious past. (In fact it’s a mystery even to him as a bout of amnesia means he can remember nothing of his childhood).
After arriving at his new posting, Dudikoff quickly finds himself entangled with illegal arms dealers and his commanding officer’s comely daughter (Judie Aronson).

Can Dudikoff stop the baddies? Will he get the girl? Or, in an unexpected break with convention, will our hero be romantically rejected moments after the villains happily complete their dastardly scheme? (Sadly, this is not that film, but we long to see it).

Exploding Helicopter loves films which give their heroes’ byzantine backstories that later, through a succession of unlikely twists, prove surprisingly relevant to present day proceedings.

So, of course, one's cliche antennae can't but start twitching during a hilarious early scene - ripe with clunking exposition - that reveals Dudikoff was actually raised on a remote Pacific Island under the care of a Japanese soldier who was unaware World War II had ended. Just fancy.

Such an outlandish personal history would normally take some explaining. But fortunately, the amnesia gimmick means the scriptwriters don't have to explain a thing about these extraordinary circumstances (though frankly we’d love to have heard it) or shed any light on how Dudikoff came to be supernaturally skillful at martial arts. Look, it just happened right?

This colourful biography appears entirely irrelevant, until we meet a wily old Japanese gardener who seems just a little too interested in our hero. Wait! No! Don't say it’s the man who raised Dudikoff all those years ago? And if that wasn’t preposterous enough, it turns out the oriental horticulturalist is working for the villainous Mr Big’s Dudikoff’s trying to stop.

Just how nuts is this film?

Let’s start with the villain. He’s an illegal arms dealer who - rather than lead a low key, incognito sort of life, away from the scrutiny of law enforcement - lives on a giant estate with a private army of highly trained ninja. Ludicrous this may be, but it does provide plenty of karate savvy, pyjama-wearing butt for Dudikoff to kick.

Ordinarily, a chop-socky action flick featuring a ninja warrior hero who has to battle an army of similarly skilled opponents use the services of an actor with a solid knowledge of martial arts. Think Jackie Chan; Jet Li; er, Steven Seagal. (Well, you get the point.)

But ordinary is not a word you'd ever associate with this film. Bizarrely, Michael Dudikoff was cast despite having no knowledge of ninjutsu, karate, or aikido (although I understand he’s a black belt in origami). It should have been a disaster. Incredibly, it works.

Is American Ninja worth watching?

It may be goofy, it may not even approach anything like making sense, but if you’re looking to relax, crack open a beer, and be entertained for ninety minutes then you really can’t go wrong.

In many ways, American Ninja is a microcosm of everything that was good about eighties action films. It creates a world where anything can happen, populates it with larger than life characters and gives them an easily understandable mission to complete. It’s a formula so simple you wonder how filmmakers today make such a mess of so many films. (Wachowski brothers - or sisters, or whichever gender you are this week: watch and learn.)

Chopper fireball fans have to be patient as our favourite fiery delight doesn’t take place until the film’s denouement.

With Dudikoff and his army buddies closing in, the villain tries to make a getaway by grabbing Dudikoff’s girlfriend hostage and escaping in a helicopter.

As the chopper lifts into the skies, our Mike grabs on to the landing skis of the whirlybird. Clambering up the outside of the craft, he swaps a few blows with the nasty desperado.

After freeing his squeeze, the ‘Dude’ leaps from the aircraft onto the roof of building over which it is conveniently hovering.

Back on the ground, a solider has whipped out a rocket launcher which he fires at the helicopter. You’ve likely been reading this website long enough to know what happens next. (Hint: the helicopter explodes).

What’s not to enjoy? The fireball’s nice and juicy and we get to watch the wreckage crash to the ground in time honoured fashion. Yes, the helicopter’s is clearly a model, but it’s pretty convincing. Overall, it’s a winner.

None to report. Method and style of destruction have all been done many times before.

As already mentioned, Dudikoff and Aronson survive. Leaping from an exploding helicopter is a fairly common occurrence and there’s certainly some fun to be had with it.

Angels & Demons, which featured the novel sight of Ewan McGregor playing, yes, the Pope as a weird sort of Catholic Obi Wan Kenobi, his McHoliness safely parachuted from miles up after disposing of a nuclear bomb. In helicopter escape circles, this perhaps remains the high watermark.

Sadly, in American Ninja, our heroes only have to jump about six feet from a helicopter that has no good reason to still be hovering so low in the first place.

Exploding Helicopter always enjoys filmmakers attempts to disguise exposition as a clumsy piece of dialogue. And there’s a wee gem to enjoy here.
“Have you ever heard of ninjutsu sir?”
“What's that?”
“The secret art of assassination.”
“Yeah of course I have!”

Chuck Norris was originally cast in the lead role, but declined at the prospect of having to obscure his face by wearing a ninja outfit. “If I'm going to be in a film,” he loftily declared. “I don't want my face hidden.”

Given that Chuck has spent the majority of his career hiding his face behind a straggly pubic wig, some readers might find such a position of principle odd.

Listen to the Exploding Helicopter podcast on American Ninja via iTunes, YourListen, Stitcher or Podomatic.

Read reviews of American Ninja by our friends at Comeuppance Reviews and DTV Connoisseur.
Posted by Exploding Helicopter at 10:46