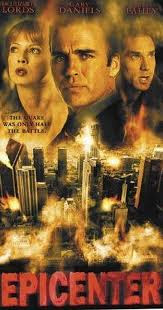 Usually that nagging sense of déjà vu is just a trick of the imagination. A product of inspiration-lite directors regurgitating the ideas of other, invariably better, movies.

But when Exploding Helicopter watched Epicenter (2000) that feeling of familiarity was no mental illusion. Most viewers really had seen this film before.

That’s because Epicenter is a bona fide Franken-movie. No joking, folks. It genuinely has been made from large chunks of other movies, which have then been clumsily stitched together with a few original scenes.

And like the mad doctor’s ghastly creation it’s ugly to look at, lumbers along slowly, and deserves to be put out of its misery.

Nick Constantine is the disgruntled employee of a Los Angeles technology company. But rather than do what the rest of us would – ie. skive around on Facebook all day and loiter in the staff kitchen moaning about Barry from Accounts – he instead steals their plans for a top secret weapon.

We know: it sounds fool proof. But just as Nasty Nick is about to flog the blueprints to a group of shady mafia types, he’s arrested by a saucy undercover FBI agent. D’oh.

It looks like our boy is heading straight for the slammer until another entirely believable development occurs: a devastating earthquake suddenly strikes LA, destroying buildings and roads, and knocking out all communications.

With the city in chaos, the cop and the criminal somehow find themselves being hunted by illegal arms dealers and rogue CIA agents who all want the super-weapon’s specs.

So: a secret weapon, FBI, mafia, massive earthquake, rogue CIA agents and arms dealers – and all this happens within the first 20 minutes. In case you were wondering, this is not a Ken Loach movie.

In the role of the heroic FBI agent we have the *ahem* legendary Traci Lords. Now the name may not be immediately familiar, but she was once the highest paid, most in-demand actress in the film business.

Or, to be more exact, the pornographic film business.

It’s true. In the mid-Eighties Madame Lords was the lonely man’s masturbatory fantasy of choice, starring in such seedily titled fare as New Wave Hookers, Black Throat and the pun-tastic Beverly Hills Copulator.

Unfortunately, the Princess of Porn’s reign ended in infamy when her real age was discovered. Turns out our Traci was barely 18, meaning her entire oeuvre had been made whilst she was a minor.

The ensuing scandal threw the adult entertainment industry into crisis and saw Lords herself arrested – although by this point in her career our Traci was probably used to going down for her work.

Her co-star is martial arts nearly-man Gary Daniels. He plays the criminal computer nerd Lords must bring to justice.

The Brit-born kickboxer was a B-movie action star during the Nineties. But unlike messrs Seagal and Van Damme, he never made the jump to top tier fare.

The problem was that Daniels could only really do one thing: beat people up. His thespian abilities were as wooden as the bokken sticks he routinely used to batter opponents.

And let’s face it: when someone’s watching Big Steve’s movies and thinking ‘I just wish I had such range…’, you know they’re in trouble.

All of which makes his casting here rather puzzling. Gazza’s role as a nerdy techno boffin almost by definition requires him to not crack any heads together, so we’re left watching the acting chops of a man who can only do karate chops. It’s like casting Timothy Spall as the lead in a martial arts cage-fighting movie. What on earth were they thinking?

And be warned: while his fellow actors were no doubt relieved to not be getting kung fu kicked in the gonads, for the audience this is still a very painful experience indeed.

Let’s cut to the chase (or more accurately, cut to someone else’s chase): Epicenter lifts entire scenes from other movies.

Some examples: early in the film, there’s a sequence where a car chases an out of control trolley car. You might enjoy it if you hadn’t previously watched Eddie Murphy’s risible action comedy Metro (1997), where it first appeared. You can even see Murphy’s gurning face inside the vehicle.

Once the earthquake hits, destruction is wrought upon Los Angeles in spectacular big-budget style. Unfortunately, Epicenter’s budget barely stretched to Traci’s upholstered bras, so what you see are clips from other movies.

Those three characters trapped inside a damaged building, where the elevator fails and crashes? Hello, Speed (1994). That impressive subway crash? Hmmm, looks like Money Train (1995) Even the footage of the earthquake ripping buildings apart is nicked from The Big One: The Great Los Angeles Earthquake (1990) (TV Movie).

Ironically for a film about an earthquake, the shakiest aspect is the actual veracity of what you’re seeing.

But here’s a surprise! The exploding helicopter action appears to actually be an original sequence.

Pursued by corrupt government agents who are aboard a helicopter, Lords and Daniels take shelter inside a quake-damaged building. While the gunmen on the whirlybird try to shoot down the doughty FBI agent (who, in fairness, presents two almost unmissable targets), Daniels sneaks onto the roof of the building.

Grabbing a piece of broken masonry, Daniels hauls if over the side of the roof. The rubble plunges downwards into the rotor blades of the chopper. The damaged aircraft flies into the side of the building and then falls to the ground, where it explodes.

In keeping with the film’s shoddy tone, this is a lamentable chopper fireball. The explosion looks unrealistic and the fuselage doesn’t disintegrate nearly enough to satisfy ardent chopper fireball fans.

However, there is a refreshing simplicity to this whirlybird conflagration. We’ve seen helicopters destroyed in all sorts of convoluted ways, but never by someone just dropping a bloody big rock on it.

Review by: Jafo
Posted by Exploding Helicopter at 16:22