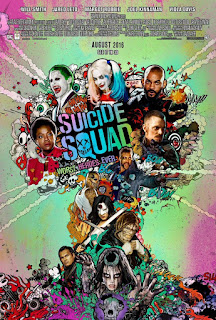 ‘If all our goodies are so bad, then maybe our baddies might turn out to be good..?’

This, clearly, must have been the thinking at DC Towers when they green-lit this movie. After the massive, almost global-level, raspberries that were blown at its recent Superman and Superman vs Batman movies, something had to be done. So the bigwigs at Marvel’s ailing rival decided to get down and dirty.

And undoubtedly, on paper Suicide Squad (2016) sounds like a great idea. Simply inject mini-bombs into the necks of a group of super baddies, then send them out to covertly tackle the obscenely hazardous jobs that nobody else can do. Brilliant! But the question is: by this point, is there any idea so good that DC can’t make a complete Horlicks of it?

The star of her embryonic team is the Enchantress, a polite young lady possessed by an incredibly powerful sixteenth century witch. But it’s okay because Wheeler has the witch’s heart locked in a sealed box, and so can control her. Until the witch steals her heart back within the first ten minutes and starts building a device that will destroy the world. (Though she’d better get a move on if she wants to beat Trump to it.)

The Suicide Squad are unleashed to tackle the new threat, without anyone pausing to acknowledge that their enemy is simply one of their own members gone to pot, the super baddie equivalent of a sacked burger chain worker pissing in the French fries. The stark fact is, if Wheeler hadn’t tried to form the Suicide Squad, the whole mess literally wouldn’t have happened. At source, this is an HR problem dressed up as an action movie.

First, the good news: the ladies own this movie. Both the bonkers Harley Quinn (Margot Robbie) and cold-as-ice Amanda Wheeler (Viola Davis) are terrific. 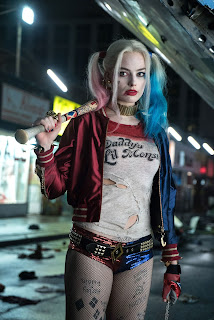 Will Smith, being Will Smith, of course insisted on his Deadshot character having a schmaltzy backstory (he’s a great dad, doesn’t hurt women and kids, quite the gentleman etc) that jars horribly with the rest of the movie. It’s fascinating how the former Fresh Prince, who in real-life literally worships an alien race of giant lizards – Hello, Scientology! – always ensures he plays grounded characters.

Then there’s Joker. During filming, Jared Leto apparently got into his villainous role by sending live rats and dead pigs to fellow cast members, and watching footage of real gangland killings.

All of which sounds a lot more interesting than anything he manages on screen. Admittedly, Heath Ledger’s titanic Joker performance, crystalized by his early death, was always going to be a tough act to follow. But Leto’s turn here, hammy and mannered without the remotest sense of threat, is pure panto. (Perhaps he should have remembered Laurence Olivier’s advice to that other method junkie, Dustin Hoffman: “My dear boy, why not just try acting?”)

Unsurprisingly, given that the rest of the Squad are each given roughly one-and-a-half lines to establish their character, they remain cardboard cut-outs.

Is this movie any good?

Not according to Rotten Tomatoes, which gave the movie a measly 26 per cent. However, Exploding Helicopter suspects that, after the turgid Man of Steel and the unending torture of Batman vs Superman, critics had already decided that the next DC movie was due for a good kicking.

This seems a mite unfair. True, Suicide Squad is crass, simplistic and dangerously uneven, and nicks ingredients from better movies with grave abandon. But there are some good performances and it rollocks along at such an entertaining pace that there’s not time to consider how duff it all really is.

There are three helicopter crashes in Suicide Squad, though only the second one actually results in an explosion. It happens when a freshly rescued Harley Quinn is smooching Joker on the opened back ramp of a military chopper. Suddenly a missile hits the front of the craft and Harley, back-flipping out on to the roof of a building below, lands in time to momentarily see the flaming craft hurtling earthwards before it disappears behind another skyscraper. Oh, no! Will Joker survive? Yes.

Precious little. A standard CGI explosion, at night (always a cop-out), followed by a quick shot of the flaming craft going out of sight. This is seriously middling stuff.

The sorry spectacle of the weak explosion is partially redeemed by the two non-exploding crashes, which once more prove right a pet theory of Exploding Helicopter – that it is technically impossible for a named character to be killed, or even seriously hurt, by a chopper smash, no matter how catastrophic it looks.

Early on, a chopper carrying the whole Suicide Squad is hit by gun-fire. Hurtling fifty feet towards the ground, it crashes onto a concrete city street then rolls over at high speed around seventeen times. There’s even an internal shot of our heroes bouncing around inside, like an old pair of trainers in a washing machine.

Of course, the actual result of such a crash would be smashed bones, cracked heads, massive internal hemorrhage and across the board deadness. But naturally, this being an action movie, everyone emerges without a scratch. Harley Quinn even gets to say: “That was fun!”

Later in the film, a helicopter containing Suicide Squad Svengali Amanda Wheeler (basically the Simon Cowell of super villain groups, only not so vindictive) is smashed out of the sky and totally wrecked. Naturally, everyone else aboard the craft is rendered either dead or unconscious, but our Mandy’s tip-top and strutting around the place again within minutes.

Spoken by a prison guard, as Deadshot holds a gun to his head: “Ames, If this man shoots me, I want you to kill him and I want you to go clear my browser history.”

Review by: Chopper
Posted by Exploding Helicopter at 16:40