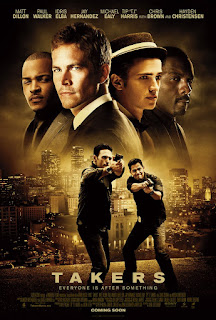 In many respects, this is a very convincing film: it’s a heist movie that leaves the viewer feeling like they’ve actually been robbed.

That’s right. Just check your watch at the end, and you’ll realise that those canny criminals from Takers (2010) have shamelessly robbed two hours of your life without so much as a please or thank you.

But that’s not even this movie’s biggest crime.

Oh, no. Not content with pilfering your hard-earned downtime, the film-makers have also brazenly nicked the entire plot from Michael Mann’s classic movie, Heat.

Now, that wouldn’t be a problem if Takers was a sizzling hot thriller. (Some of Exploding Helicopter’s favourite movies have been, ahem, a touch derivative. Yes, we’re looking at you, Firebirds.) Unfortunately, this low budget knock-off is little more than a lukewarm rehash of the original. They should have called it Reheated.

The story follows a group of gentlemen thieves who, when they’re not helping the poor and dispossessed (as most criminals are famously wont to do), execute elaborately staged robberies against high-value targets.

But as they plot their biggest ever payday, our merry band of outlaws find themselves pursued by a dogged cop who’s determined to bring them to book.

As the clock to the big job ticks down, we’re left wondering: will the Takers escape with the take, or will the Takers become the Taken? (At which point, Liam Neeson might well start issuing gravelly-voiced ‘Oirish’ threats on his mobile phone again. You know what he’s like about showing off his ‘special set of skills’.)

Given that Takers is a cheap, second tier enterprise, it’s no surprise to find that the cast is a curiously eclectic hodge-podge of nearly men and has-beens.

The dubious honour of topping the bill goes to Idris Elba, an actor for whom A-lister status remains frustratingly elusive. After justifiably coming to fame in The Wire, old Stringer Bell’s desperate efforts to elbow his way into the elite premier club have become increasingly painful to watch. And there’s literally nothing he won’t do achieve it.

Puppyishly eager to please, the aspiring star has deftly chiselled away at his own credibility with a series of unwise choices. In particular, he seems to think that any role in a big budget blockbuster is a good idea.

So he’s been a glorified doormen with a silly hat in Thor, an expendable extra in Prometheus and a tedious, cliché-spouting soldier in the execrable Pacific Rim. And who could forget his unrecognisable ‘blue muppet’ in last year’s Star Trek Beyond? Answer: everyone. (Note to Idris: There’s little point being in a film if the prosthetics mean no-one can actually see you).

Not content with these big banner bad choices, our Idris is also something of a cameo machine – with a peculiar weakness for schlocky horror pics such as Prom Night, The Reaping and 28 Weeks Later. (Complete-ists should also definitely check out his five-minute turn as a gangsta exorcism priest in ‘scary’ yawnfest The Unborn, a self-harming career choice so marked it almost counts as a cry for professional help.) And let’s not even get started on his tiresome campaign to be the next 007…

Joining the wannabe Bond in this movie are two other perennial B-listers: Paul Walker (whose pre-crash career consisted of action flicks even less memorable than the Fast & Furious series). And, wait for it: Hayden Christensen. Yes, the human balsa wood block who, in a spectacular feat of reverse alchemy, transformed an almost unprecedented career break in the Star Wars prequels into two Razzie Awards. (As Yoda might croak: “Truly terrible as an actor he is.”)

This unlikely trio are pitted against a resolute cop played by Eighties has-been Matt Dillon. With his immaculately chiselled cheekbones and soulful eyes, Matty oozed charisma in some of the decade’s touchstone films (Rumblefish, The Outsiders and Drugstore Cowboy). He was once even hailed as the best actor of his generation by no lesser figure than uber-film critic, Roger Ebert.

But perhaps, like the sensitive-type characters he typically played, the quiff-coiffured star didn’t quite have the mettle for the cut-throat world of a Hollywood career (where success is mostly enjoyed by robotically-driven sociopaths with the personality traits of an apex predator. Hi, Tom!). By the Noughties, Droopy-eyes Dillon’s slow descent into run-of-the-mill fare like Takers was well and truly under way. Still, it beats queuing at the job centre.

As Exploding Helicopter has already mentioned, Takers ransacks the plot of Heat – focussing on the ‘cat and mouse’ between the cops and robbers.

Such uninspired aping is bad enough, but it’s when Takers tries to be different that the problems really start.

Unlike Michael Mann’s deliberately chill portrayal of ruthless professionals, Takers desperately wants us to like the criminals. Cue awkward attempts at creating empathy.

Big Idris is given an entirely pointless sub-plot where he dutifully tries to help his drug-addicted sister. And there’s a hugely unconvincing scene where the gang divvy up the swag from their last robbery, only for Paul Walker to suddenly ask: “Ten per cent to the usual charities?” (See kids, they’re not all bad!)

But it’s during the central heist that the film’s bloody-minded determination to preserve the villains’ ‘good guy’ status reaches absurd levels. As their plan goes awry, our heroes find themselves locked in a gun battle with heavily armed security guards.

Despite standing just a few feet apart and spraying automatic weapons fire at each other, not one bullet hits a human form. It’s ridiculous. Star Wars’ famously target-shy Stormtroopers look like crack shots in comparison.

While the film blanches at depicting flesh and blood casualties, it’s fortunately not so squeamish when it comes to showing the fiery end of one of our favourite rotor-bladed friends.

Takers opens with our criminal brothers-in-arms robbing a jewellery store located on the upper floor of a skyscraper. To make their escape, Elba and his gang flee to the roof and commandeer a helicopter that, with credulity stretching convenience, just happens to have landed there.

After making their aerial getaway, our plucky anti-heroes abandon the chopper in a deserted car park. As they stroll away, one of the thieves triggers an explosive killing off the helicopter. Rest in pieces, whirlybird.

Pretty good. The fuselage of a very realistic looking helicopter is blown-up without the need for any obvious digital effects. The explosion is nice and juicy with a soupcon of dramatic slow-motion. Nice. 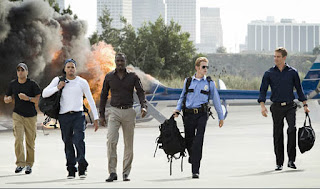 As everyone knows, cool guys don’t look at explosions. So naturally, Elba and his gang studiously ignore the chopper fireball that erupts behind them as they slowly saunter towards camera.

We’ve seen this action movie cliché countless times before – the earliest one Exploding Helicopter has discovered is in Blue Thunder (1983). And more recently, The Expendables 3 kicked off with Sly, Stath and the rest walking away from a digital chopper explosion so terrible you almost expected to see an ‘Atari’ logo in the corner of the screen.

While we don’t object seeing this trope trotted out yet again, it would have been nice if director John Luessenhop given the scene an original twist somewhere.

Exploding Helicopter loves a good tagline (“In space no-one can hear you scream”; “Just when you thought it was safe to go back in the water” etc). So it’s genuinely painful to encounter piss-poor examples of the marketing art. And Takers has some of the worst ever written.

And the unutterably mundane: “Everybody’s after something.”

One gets a very clear sense that, having watched the movie, the marketing team must have decided: Well, if even they couldn’t be arsed to put in any effort…

Review by: Jafo
Posted by Exploding Helicopter at 11:20