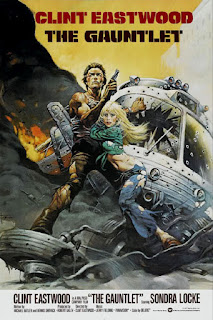 It’s a question that has troubled both the great minds of Greek philosophy and anyone who’s ever watched The Gauntlet. (Admittedly, not two audiences you generally find in each other’s company.)

A brief explainer: the 1977 film stars Clint Eastwood and Sondra Locke, who were then a real-life couple. In the movie, Clint plays a callous, cruel, cold-hearted cop who treats the witness he’s meant to protect (Locke) like dirt.

At the time, Eastwood’s bullying behaviour just seemed part of his gritty role and the plot’s ‘odd couple’ premise. But in the wake of the couple’s acrimonious split a decade later, it turned out that, oh, Clint wasn’t really acting.

Amid the fallout of their venomous and lawyer-heavy break-up, rumblings began. Keen-eyed observers noted that there were obvious parallels between the callous, cruel, cold-hearted bastard who treated Locke like shit-on-a-shoe and the character he played in in the movie. (Boom! See what we did there?)

Suddenly, The Gauntlet was transformed from a disposable, throwaway thriller to a sombre piece of documentary evidence worthy of earnest philosophical study. (And of course, close examination by a website dedicated to rotor-assisted conflagration. Consider this Exploding Helicopter’s official ‘Me too’ moment.)

A drunken, ne’er do well, cop (Clint Eastwood) is tasked with escorting a prisoner (Sondra Locke) from Las Vegas to Phoenix. His charge is a gobby prostitute who’s scheduled to appear as a witness in a big court case.

It should be a routine prison transfer, but someone isn’t keen for the cantankerous call-girl to take the stand. Within minutes of starting their journey, the mismatched pair – who fight like two rats in a sack – find themselves pursued by a couple of hitmen. And the situation quickly gets worse when they discover that the Vegas police force is also trying to bump them off. Yikes.

Realising they’re in the middle of a vast conspiracy and with no-one to trust, the pair go ‘off the grid’ in an effort to complete their journey as they run….. the gauntlet.

Locke and Eastwood – essentially the Brad and Angelina of their day – were in a relationship from the mid-Seventies until 1989, during which time co-starred in six films (including The Outlaw Josey Wales, Bronco Billy and Sudden Impact). But few movies have ever crashed as publicly and violently as their own picture-perfect partnership finally did in the late Eighties. It was one of the bitterest bust-ups in Hollywood history. 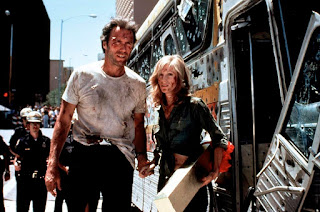 How bitter, you ask? Well, Locke recounted – at length – the full grisly details of the couple’s eventful relationship in her dirt-dishing autobiography, ironically titled The Good, The Bad and The Very Ugly.

In the book, the Oscar-nominated actress recounted how ‘Squint’ had curtailed her promising acting career by getting her to appear almost exclusively in his projects. (Locke appeared in only a handful of non-Clint films).

Not content with controlling her professional life, Eastwood – adamant that he didn’t want to be a father – persuaded Locke to have two abortions and then get her tubes tied. (Although that didn’t stop the caddish Clint fathering two children with a woman he was seeing on the side).

And after they broke-up, the Man With No Scruples allegedly used his Hollywood pull to sabotage her attempts to work as a director. (After multiple projects were mysteriously nixed, Locke sued, and received an out of court settlement). As Locke reflected after publishing her book, “I wish I’d read it, not lived it.”

All of which provides an interesting lens through which to view The Gauntlet. Throughout the film, Clint orders Locke around with contemptuous disdain. And when she doesn’t comply, she quickly finds herself tied-up, gagged and even knocked out with sleeping gas.

“Miserable bitch,” Old Squinty spits out at one point, with particular venom. In another scene, he takes particular pleasure in questioning how on earth Locke’s character could make a living as a prostitute, given her looks.

Some observers might suggest that Exploding Helicopter is reading too much into one film. But one only needs to look at how frequently ill-fortune befell the demure blonde whenever she appeared in an Eastwood picture.

For starters, her character is raped in The Gauntlet, Sudden Impact and The Outlaw Josey Wales. And then there’s the ultimate indignity of co-starring with a libidinous orangutan in not one but two movies. To paraphrase the great Oscar Wilde, once may seem like misfortune; this often just looks like callousness.

Riding a motorcycle, Eastwood and Locke try to evade a couple of mafia sharp-shooters who are pursuing them in a helicopter.

The pair head cross-country in an effort to shake off the villains. Their path takes them down a hill that has a string of electricity pylons running across it.

Now, it might seem a fairly simple task to avoid these easily observable hazards. But if Exploding Helicopter has learned anything over the course of a long, unsuccessful writing career, it’s to never underestimate the stupidity of a pilot.

Sure enough, the villains – giddy at the prospect of being able to finally bump-off Eastwood and Locke – fly too close to the pylons. The whirlybird becomes entangled in wires, crashes to the ground and explodes.

The helicopter rather fetchingly becomes snafued in the cables like a rotor-bladed meatball entwined in spaghetti. It’s a nice touch.

The chopper then crashes to the ground whereupon it promptly explodes. (Unlike a pasta-based Italian classic).

This is the earliest example Exploding Helicopter has discovered of a helicopter getting caught up in wires or cabling. Since this film though, it’s become a familiar trope of the genre: see Die Hard With A Vengeance and The Dark Knight for similar efforts.

The Sud Aviation SA 341G Gazelle destroyed in this film is the same helicopter that appeared in The Cat from Outer Space as well as the TV disaster movie Flood.

“Now, have you got that? Or do I need to write it in braille and shove it up your ass?”

Review by: Jafo
Posted by Exploding Helicopter at 13:22