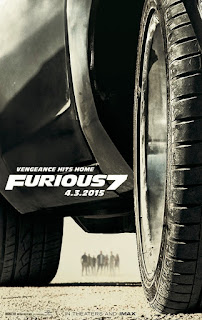 The rise and fall of a film franchise used to be predictable.

This would be followed by a slew of sequels that would steadily decline in quality until the now sorry saga would be killed off. (Or, in these creativity-free days, rebooted a few years later.)

It’s a cycle we’ve seen repeated hundreds of times. (And that’s just the Spider-Man series.) But every rule has an exception.

For one franchise that has defiantly bucked this tried and tested trajectory. One series started indifferently, got much, much worse, then unexpectedly transformed itself into one of the most successful franchises around.

Movie number seven opens on an optimistic note for the Fast and Furious gang. After being granted amnesty for their crimes at the end of the previous film, life seems surprisingly quiet.

But the opening titles have barely finished before any sense of tranquility is unceremoniously mowed down, then crunchingly reversed over again. It turns out that Deckard Shaw - the brother of the villain they stopped in instalment six – wants revenge and begins to hunt Vin Diesel and his homies down.

Enter Mr Nobody, the mysterious head of a government covert ops unit. He offers to help Big Vin stop Shaw, but only if he- ah, here we go – steals a high-tech McGuffin (copyright: every action movie ever) that’s about to fall into the hands of terrorists.

What follows is a game of cat and mouse (or, more accurately, car and mouse) as each side competes to complete their mission.

Could this be the end of the road for Vin and his crew? No. Or will he and his chums get to drive off into the sunset and a potential endless stream of sequels? A resounding yes. Will there be a folksy, aw shucks end scene featuring the heroes, complete with a toe-curling speech about ‘family’. You betcha.

And lest viewers were unsatisfied by the number of muscular bald men onscreen, chrome-domed action star Jason Statham joins the cast in the role of Deckard Shaw.

Also making his debut is Kurt Russell as Mr Nobody, the shadowy government agent who gives the gang their mission.

Rounding-out the ensemble are returning favourites Michelle Rodriguez, Paul Walker, and, erm, the other ones (who, apart from the Fast & Furious films, mercifully don’t tend to trouble cinemagoers too much with their ‘acting’. We’re looking at you Tyrese...).

Long and winding road to success

When Furious 7 became one of the highest grossing films of all-time (appropriately it’s seventh on the top movie list) it capped a remarkable transformation for the franchise.

This franchise may be an action movie behemoth today, but it’s easy to forget that the first Fast and Furious film was only a moderate hit. Despite being instantly forgettable, it somehow did enough business to spawn two predictably awful sequels (Even Big Vin, hardly the most astute judge of a script, considered them beneath his questionable talents and declined to appear).

However, after the third film Tokyo Drifted (geddit) in and out of cinemas the whole enterprise looked to be heading for the cinematic scrapheap. It was only after the unlikely appearance of a fourth film that producers finally hit upon a winning formula.

The street-racing plot lines were abandoned, with the focus moved to elaborate heists featuring over-the-top vehicular action. And the cast was rejigged with a ‘greatest hits’ of characters assembled from the previous instalments (Vin Diesel and Paul Walker were brought back to lead proceedings).

And then, in the fifth film, they added a magic ingredient: Dwayne Johnson.

The introduction of the The Rock added a new dynamic – not to mention some badly needed charisma – into proceedings. An unexpected critical and commercial hit, Fast Five (2009) made almost as much in ticket sales as the first three films put together.

Since then the series has powered on, becoming a global phenomenon at a point when most franchises are being handed a revolver and told to take a long walk in the woods.

Like every aspect of Furious 7, the exploding helicopter sequence is spectacularly convoluted. For the sake of brevity, let’s cut it down to the basics.

Having stolen the McGuffin, our heroes find themselves pursued by a heavily armed attack helicopter.

Seeing his friends in trouble, Vin Diesel jumps into a car and drives at high speed off the roof of a multi-story car park.

Vin and his vehicle corkscrew towards the airborne whirlybird as if trying to ram it from the sky. Unfortunately, the car only clips the chopper, and it seems the aircraft has escaped. But wait!

Remember that bag of grenades we saw a few minutes earlier? Well, they’re now hanging beneath the helicopter’s fuselage. (Big Vin having cleverly hooked them to the whirlybird as he whizzed past).
Before you can shout, “that’s convenient foreshadowing”, The Rock fires a pistol at the explosives causing them and the chopper to explode.

Like one of those giant domino displays, this chopper fireball requires a torturously elaborate sequence of events to happen in exactly the right order.

Unlikely it may be, but you cannot help but applaud the ingenuity.

Review by: Jafo
Posted by Exploding Helicopter at 18:26