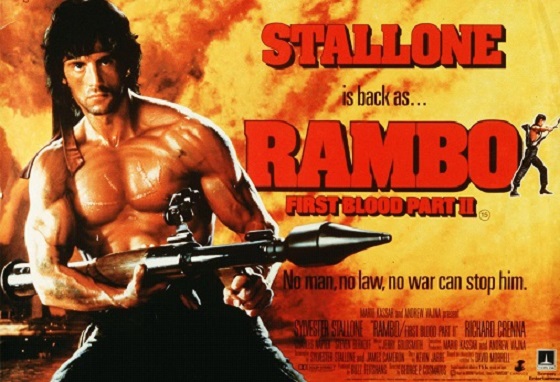 Rambo (Sylvester Stallone) is released from prison so he can secretly return to Vietnam and search for US prisoners of war.
Naturally, within a few minutes of starting his mission, Rambo finds the POWs, is captured, and then tortured by a scenery chewing Steven Berkoff (Berkoff presumably took the role so he could fund his next unwatchable, stage production of Brecht).
Quite why the Russians are in such close cahoots with the Vietnamese is never explained in the screenplay written by Stallone and James Cameron. I guess it’s enough to know it was the 80s and they were all Commies.
Inevitably, Rambo escapes and commandeers a helicopter. Sly tries to fly the POWs to safety pursued by Berkoff in a tasty looking MI-24 Hind helicopter.
An air battles ensues, and Rambo’s chopper is badly damaged. Berkoff moves in for the kill but is momentarily loses his prey due to the smoke billowing from Rambo’s damaged helicopter.
Berkoff catches up with the wounded chopper, which has now landed. Rambo appears mortally wounded in the cockpit. Berkoff pauses choosing to savour his coming kill. Unfortunately Rambo is just playing possum, picks up a rocket launcher which he fires through the cockpit window of his chopper blowing up Berkoff’s Hind.
Artistic merit
Action movie hack George P Cosmatos (Cobra, Tombstone) isn’t known for subtlety and blows the hell out of the helicopter with unceremonious simplicity. There’s no fuss, flash or finagle, but you can’t complain about the size of the fireball the pyrotechnics team generate. It’s a rich towering inferno which scatters an impressive amount of wreckage widely about.
Exploding helicopter innovation
There really is none.
Do passengers survive?
An emphatic, no.
Positives
There’s plenty of helicopter usage throughout the film. You’re always quietly hoping one’s going to get blown up, so it’s good to see one of the film’s villain making his exit via a chopper fireball.
Negatives
While the cold dead hand of George P Cosmatos is on the tiller of this film, ace cinematographer Jack Cardiff was, bizarrely, photographing this film. You might have hoped he would have been able to bring a little more imagination or sophistication to the exploding helicopter in the film.
Interesting fact
The acclaimed, Oscar winning cinematographer Jack Cardiff shot this film which is a bit like getting Michelangelo to paint your flat.

Still want more? Then check out the Exploding Helicopter podcast episode looking at the film. Listen to the episode on iTunes, Podomatic, YourListen, or Stitcher.

Posted by Exploding Helicopter at 22:50