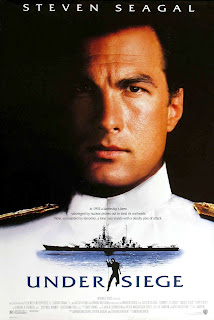 Steven Seagal stars as Casey Ryback, a Navy SEAL turned cook, who single-handedly takes down an entire ship full of crazed terrorists out to hijack its cache of nuclear weapons.
It may have been made in 1992, but director Andrew Davis must be given credit for including every Eighties action cliché imaginable. Gratuitous nudity (thank you Erika Eleniak)? Check. A boisterous frat boy party atmosphere with a blues rock soundtrack? Check. Important military types sat at an enormous table barking one-liners? Check.
All this may make Under Siege sound like a terrible film, especially as it’s star – the stony-faced Seagal - has the emotional range of an Easter Island statue. Yet, despite its supposed flaws the film is a rollicking entertainment that can be enjoyed with embarrassment.
Exploding helicopter action
So, to the exploding helicopter action, and there are two examples of the art to enjoy.
After the villains take control of the ship, Seagal and Eleniak sneak on to the deck of the battleship on which the action takes place. Big Steve spots a huge twin rotor Kawasaki/Vertol KV107.
After liberally splashing the helicopter with paint thinner, Old Totem Face sets alight the fuel which causes the chopper to explode. Seagal only escapes the blast by jumping over the side of the ship.
Later in the film, a team of Navy Seals is called in to retake the ship. However, if Seagal was worried that a chopper full of kick-ass action stars were about to come aboard and steal his thunder, he needn't have been.
Tommy Lee Jones uses the battleship’s defence systems to knock the helicopter out of the sky with a flick of a switch. Seagal's presence as the biggest action star on the ship is secured.
Artistic merit
The scene where Seagal blows up the deck-bound chopper was nominated for the MTV award for best action sequence, losing out to the freeway scene in Terminator 2. There can be no higher accolade than that. Well, almost no higher accolade.
Exploding helicopter innovation
It is rare thing to see a stationary helicopter being used purely as an explosive diversion rather than a fiery tomb for its occupants.
Number of exploding helicopters
Two.
Favourite quote
Seagal: “What is this babbling bullshit?”

Review by: Neon Messiah
Posted by Exploding Helicopter at 17:23