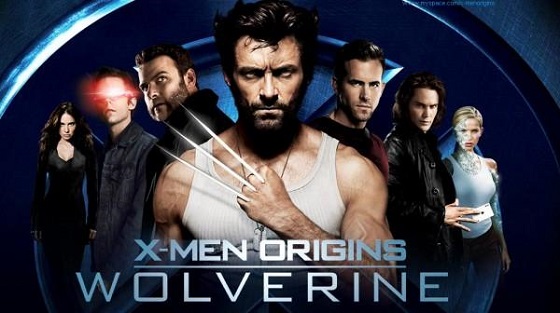 Hugh Jackman returns as Wolverine in this X-Men franchise prequel. Looking uncannily like Amos from Emmerdale Jackman goes in search of revenge for the death of his girlfriend.

In order to exact said vengeance, Wolverine signs up for the Weapons X programme and allows himself to be transformed into a hairy metal alloy. Jackman expresses his character's pain, confusion and inner turmoil by keeping his brow furrowed throughout the entire film.

When Wolfy learns that he's about to be double-crossed he escapes from the clutches of the Weapon X's evil mastermind Stryker (Danny Huston).

A naked Wolverine takes refuge on the farm of an elderly couple. Fortunately the implausibly generous old folks are used to finding unclothed men hiding in their barn and quickly invite the hairy human hybrid in for dinner.
Meanwhile Stryker despatches Agent Zero (David Henney) to hunt down and kill Wolverine with a couple of hummers and a helicopter. Having established themselves as kindly pensioners the couple are swiftly despatched by Agent Zero, providing Wolverine with the excuse he needs to exact some merciless revenge.

Making good his escape on a motorbike, Wolverine makes short work of the first hummer and swings onto the top of the second. With Wolverine in his sights the chopper pilot decides to take out both Jackman and his poor colleagues in the hummer and comes in low to fire a rocket the vehicle.

With milliseconds to spare Wolverine jumps from the top of the hummer straight at the chopper as it makes its low pass. With his claws he cuts off a rotor blade and the stabilising wing of the helicopter causing it to plummet towards the ground. With another precipitously timed leap Wolverine is able to avoid the crash and explosion as the chopper smacks into the ground rolling over several times.

Miraculously Agent Zero has not been killed by the crash or explosion. Wolverine wanders over to the helicopter wreckage and uses his radio to banter with Stryker, before strolling off. Unfortunately Agent Zero can't help but bait Wolverine after being lectured about his evil ways.

Without looking back Wolverine clinks his metallic claws against the stony ground creating a spark which ignites aviation fuel which has spilled from the chopper. It ignites in a huge fireball perfectly silhouetting Wolverine as he walks away from the explosion in slow motion.

Hero back lit by the exploding helicopter as he walks in slow motion towards the camera, that‘s a text book chopper fireball if ever there was one.

First known helicopter to be destroyed by a half wolf, half alloy, half human mutant.

Agent Zero survives the initial crash and explosion but talks himself into an early grave by reminding us that no-one likes a smart aleck.

You have to ask why on earth the helicopter’s attack run was so low thus allowing Wolverine to leap on to it. It’s a error which many helicopter pilots have made to their eternal cost.

Posted by Exploding Helicopter at 07:17