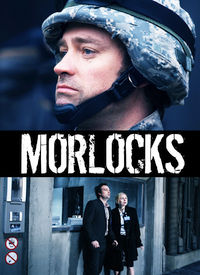 “Let me see if I’ve got this straight: you want me to travel through a rift in time, find and repair a device you lost and broke, while all the trying to avoid rampaging creatures from the future – that about sum it up?”

It most assuredly does. And even I, in my lofty position as the editor of a micro-niche film blog about exploding helicopters, couldn’t have put it better.

Credit for the above succinct summary of Morlocks’ plot goes to its hero, a certain Dr Radnor (David Hewlett). He’s a top boffin scientist who, much like this viewer, seems to be struggling to make sense of things in this turgid time-travelling saga.

With America’s economy on its knees, a top secret military unit – led by the shady Robert Picardo – has developed a time-travelling device called ‘the latch’. They plan to preserve Uncle Sam’s industrial might by bringing technology back from the future, thus preventing the US from becoming an insignificant and irrelevant bit player in global politics, an impotent shadow of its former glorious self. In other words: Britain.

Unfortunately, the grand plan runs into a hitch when the future turns out not to be the giant Apple Store they’d hoped for, but an apocalyptic wasteland inhabited only by murderous creatures (Morlocks).

Things go from bad to worse when the latch – now missing somewhere in the future – begins to malfunction, threatening the present-day world with obliteration courtesy of a massive time rift that no-one can be bothered to explain. That’s presumably because, by this point, even the writers were exhausted by garbling up so much nonsensical pseudo-science.

As the one scientist with the cranial capacity to save the day, Radnor is sent into the future with a team of soldiers to fix and retrieve the device. Will he succeed? Or will the world end in…in…an undefined, non-specific way. Oh, the drama!

Sadly, given this is a film about travelling to the future, I was left wishing I could travel back in time: ideally to a point 90 minutes earlier, when I first decided to watch this torpor-inducing piece of tomfoolery.

One never likes to be unkind to made-for-cable fare – with all the limitations on time, budget and talent that the genre inevitably involves – but this was just toss. It was so bad, that even those familiar genre clichés, normally guaranteed to raise a smile, failed to entertain.

Normally, there’s nothing I love more than watching a film’s dead meat, sorry, unfortunate extras (here fatally cast as soldiers sent to the Earth’s apocalyptic future) meet predictable and pointless deaths. Note: Star Trek raised this phenomenon to the level of high-art, with ‘landing parties’ proving deadly for anyone who wasn’t a regular character.

However, in Morlocks the senseless extras carnage all has a routine, by the numbers feel. If you’re going to serve up a cliché then it should be delivered with gusto and brio, not sloppily ladled out with the bored disinterest of a school dinner lady.

Denied such pleasures, my only interest comes from trying to work out whether certain characters have crossed the ‘immunity threshold’ – namely, have they established themselves sufficiently to indicate they’ll make it to the end of the film unscathed. Such pursuits provide about the only glimmers of entertainment amidst the dross. Still at least there is an exploding helicopter to talk about.

At the end of the film, the surviving characters have returned from the future. Unfortunately, a bunch of Morlocks have tagged along and are with causing havoc at the military base.

Two of our remaining heroes jump aboard a helicopter to attempt an escape. Hovering just off the ground, a couple of Morlocks jump onto the tail of the chopper, causing the pilot to lose control.

The helicopter crashes into ground and partially explodes, but fortuitously the cockpit remains intact allowing the two occupants to flee the wreckage and dive inside a nearby tank. With the Morlocks occupied on the wreckage of the chopper, our heroes fire the tank’s cannon destroying the Morlocks and what’s left of the chopper.

This was an every-expense-spared helicopter explosion rendered in grade Z CGI. Much like the rest of the film, it is distinctly underwhelming.

This helicopter explosion is directly caused by Morlocks (who it turns out are actually genetically mutated humans). That’s definitely a first.

Yes, the two occupants of the helicopter who scramble to safety had long since passed the immunity threshold by this point in the film.

Sorry, I just can’t think of one.

As films about time travel are written by Hollywood hacks and not quantum physicists, there’s usually an irresolvable paradox lurking somewhere in the plot: Morlocks is no exception.

Here the insoluble question is: why bother to save the present, when the future’s totally buggered? Inevitably, no-one stops to consider this.

Morlocks is a very loose adaptation of HG Wells’ The Time Machine, which begs an interesting question: if Wells had possessed the power of time-travel and seen what a mangled dog’s breakfast someone would make of his novel, would he still have written it?

Posted by Exploding Helicopter at 21:53