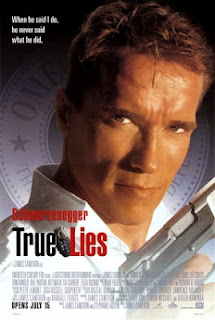 Looking back, we can see True Lies (1994) as the zenith of Arnold Schwarzenegger’s 30-year career.

A deft blend of entertainment and action, the film was a critical and commercial success. Moreover, it was the culmination of Arnie’s efforts to become a genuine box-office star rather than a simple purveyor of violent action thrillers.

Unfortunately, Arnie’s personal and professional lives become messily entangled after he is forced to reveal his double life to Curtis. It’s then up to Arnie to save the world and his marriage – a feat the maid-bothering philanderer was sadly unable to repeat in real life.

True Lies was the Governator’s third film with James Cameron. Unable on this occasion to cast him as a monosyllabic robot – and no doubt aware of the potential embarrassment that might ensue when Arnie attempted to ‘act’ like a human being – Cameron was confronted with a problem: what to do with the lumpen one’s ungainly presence? 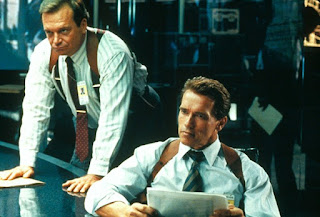 His solution was both genius and admirably simple: stuff the film with cartoon-ish supporting turns and hope to God no-one notices him.

And so we have Bill Paxton’s loony sleazeball, Jamie Lee Curtis’ awkward housefrau persona and Tom Arnold’s motor-mouthed sidekick – all of them smokescreens to distract you from the Austrian word-mangler’s presence at the centre of the film.

Top that off with a surprisingly foul-mouthed Charlton Heston, a vampish Tia Carrare, and Art Malik’s pantomime terrorist and the overall assault on the senses is almost enough to distract you from the lumbering beefcake’ performance. Almost, but not quite.

Arnie is so wooden, watching him leaves you tugging splinters from your eyeballs. It’s lucky that his role requires so much running and jumping around since, if he stood still too long, someone might be tempted to sand and varnish him.

That said, I don’t imagine anyone in this film ever imagined they were going to be troubling the acting nominations at the Academy Awards. True Lies aims to be nothing more than an unashamed piece of entertainment and in that regard it‘s a rip-roaring success.

The film’s two major action set pieces are superbly handled. The extended opening is a thoroughly enjoyable Bond pastiche, as a tuxedo-wearing Arnie infiltrates an embassy soiree and steals some computer files before escaping with a small army on snowmobiles in hot pursuit.

With his scheme unravelling fast, Art Malik absconds to the top floor of an under-construction skyscraper with some stolen nukes and Arnie’s daughter, who he’s kidnapped as a little extra insurance. With the deadline for detonation fast approaching, Arnie borrows a fighter plane and jets off to halt Armageddon and rescue his daughter.

While the terrorists are temporarily distracted, Arnie’s plucky progeny steals the trigger for the nuclear bomb. With nowhere to flee, she clambers onto the girders of one of the cranes constructing the skyscraper. Pursued by Malik, it looks like she’s about to meet a sticky fate, either at the end of Malik’s machinegun or courtesy of a hundred storey fall to the street below.

From here, the precise sequence of events would be fiendishly difficult to explain so I’m going to hit the fast-forward button. Suffice to say, Arnie arrives in time-honoured nick of time style and, before you can say ‘Aaaah’ll be beckkkkk’, his daughter is clinging to the jet’s cockpit and Art Malik is left dangling from one of the fighter jet’s missiles.

If this wasn’t enough jeopardy for the former Mr Universe to contend with, Malik’s henchmen turn up in a helicopter and fire at him before darting round the back of the partially built skyscraper. Spying the chopper through a gap in the building, Arnie hatches an ingenious terrorist two-for-one deal to extricate himself from the situation.

With Malik still hanging from the jet’s missiles, Arnie fires the rocket – complete with the sometime Casualty doctor – at the enemy chopper. Stuck to the missile, Malik is sent whizzing through the under-construction building towards his cohorts, who are only briefly able to register their surprise at the sudden and unexpected reunion with their leader before the helicopter explodes.

Helicopter destroyed by rocket-propelled terrorist: if you weren’t already sure, I can confirm this is unique in the annals of helicopter explosion. 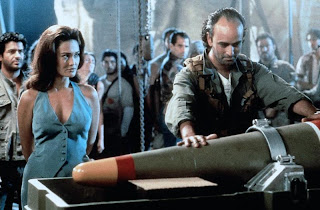 True Lies is as much a comedy as an action film. While most of the jokes still tickle the funny bone, the passage of history has rendered the gags at the expense of Art Malik’s Islamic terrorist group the equivalent of comedic tumbleweed.

Clearly, the mid-Nineties were a simpler political age for America and the idea that a bunch of religious fundamentalists could hurt Uncle Sam in his own backyard was, well, laughable. Unfortunately, the events of 9/11 and the consequences of two subsequent wars have dispelled that notion. Were it proposed today, it’s hard to imagine True Lies getting made.

“Have you ever killed anyone?”
“Yes, but they were all bad.”

To many admirers of the female form, the highlight of True Lies will no doubt be Jamie Lee Curtis’ sexy dance scene. Supposedly a demure housewife, Curtis is initially slow to get into full pole-dancing diva mode. But just as she seems to be getting into the swing of it she makes a misjudgement and falls over, much to the viewer’s amusement. Possibly the funniest moment in the film, this was actually a genuine goof which James Cameroon decided to leave in because it worked so well.

I also had a moment of déjà vu while watching the helicopter explosion in True Lies. It was done so well that the makers of straight to video actioner Executive Target re-used a brief shot from it, of the helicopter wreckage crashing to the ground onto a police car.

Listen to the Exploding Helicopter podcast on True Lies. Find the show on iTunes, Stitcher, Podomatic or YourListen.

Posted by Exploding Helicopter at 17:32