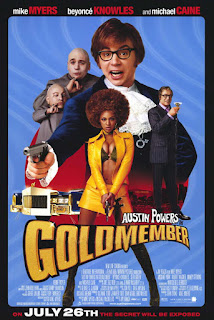 As Skyfall, the third Daniel Craig Bond film, provides a chopper fireball fix for cinemagoers, it seems an appropriate time to revisit the third of the 007 spoofing Austin Powers’ franchise.

Too tenuous a link? Perhaps. But the film does have the only ingredient necessary for a review on this hallowed website - the warming orange glow of a helicopter explosion.

We all remember Austin Powers: International Man of Mystery (1997). The series debut was hilarious, lampooning the sexual innuendo, contrived plots and simplistic henchmen of the Bond franchise.

With the public hungry for more, a sequel seemed an obvious winner. However, with the best gags used up, The Spy Who Shagged Me (1999) quickly descended into puerile joke-making. They may have doubled the budget, but unfortunately they halved the humour.

It's against this unpromising backdrop that we arrive at the third installment, Goldmember (2002) which was presumably made for no other reason than a desire by creator/producer/writer/actor Mike Myers to have a final, pocket-lining, payday.

The story is simple. Blofeld parody Dr Evil (Mike Myers) hatches a plan to take over the world by using a "tractor beam" to crash a meteorite into the Earth, melting the icecaps and causing a global catastrophe of a scale normally only seen in Kevin Costner films (Waterworld, The Postman, et al).

To do this, he needs a key ingredient (that shares a name with popular Hemorrhoids treatment "Preparation H") from a Dutch scientist from the past, Johan van der Smut AKA "Goldmember" (Mike Myers again). However, Evil's plan is foiled early doors by British agent Austin Powers (take a guess, his initials are MM). Or so it would seem. 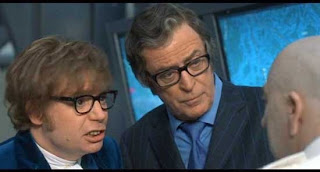 As the convolution reaches breaking point, Powers travels back in time (been there, done that in the preceding film), picks up Beyoncé as easily as she picks up the pay cheque for her role as Foxy Cleopatra, jumps back to the future, and after following a lead provided by Fat Bastard (played by, yes, you guessed it, Mike Myers) tracks down the recently-escaped Evil, Goldmember, and his Dad in order to save the day.

And if all that sounds exhausting you’d be right. Indeed, by the end, trying to follow the plot had become such a pain in the proverbial that I felt in dire need of Dr Smut’s Preparation H myself.

But you have to rewind to the opening scenes for the airborne explosive action. The film begins with what initially looks like an over-the-top action sequence. Actually it’s a fake trailer to "Austinpussy", a pretend Austin Powers biopic directed by Steven Spielberg.

It's a great moment of self-parody, with some brief but hilarious cameos from Tom Cruise as Powers, Gwyneth Paltrow as Powers-girl Dixie Normous, Kevin Spacey as Evil and Danny DeVito as Mini-Me.

As part of the sequence we see a chopper in pursuit of the motorbike-riding Dixie. Powers skydives out of a plane into his car, the Shaguar, in order to take care of the chopper and save Dixie.

Powers lines up the Shaguar to charge at the onrushing chopper, and then as it nears, launches into an acrobatic somersault - clearing the chopper and enabling him to fire at the bearded pilot, causing the helicopter to burst into flames.

Powers casually lands on the road by the rubble, before Cruise removes the glasses and utters the franchise catchphrase “Yeah Baby!”

Nothing special about the explosion, but the ridiculously implausible stunt does merit appreciation - the leap, somersault, gunfire combo, over an in-flight chopper. We know absolutely nothing about the reason why the helicopter pilot deserves to fall to a fiery end - we just know it's right, and bask in the resultant warm glow. 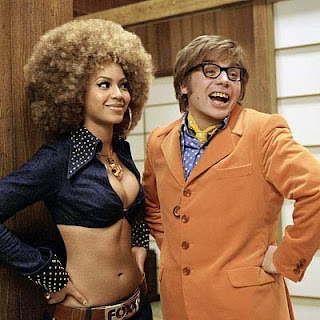 The opening trailer featuring the explosion is a genuinely enjoyable scene. I'm also sure I'm not the only one that has a soft spot for the shadow scenes from all three of these films. Simple. Childish. Hilarious.

While a step up from The Spy Who Shagged Me, by the end you're left with the question of 'wouldn't it have just been better for everyone (other than Mike Myers) if this hadn't been made?' - the answer being a decisive 'Yeah Baby!'

Nigel Powers: "There are only two things I can't stand in this world. People who are intolerant of other people's cultures... and the Dutch."


Still want more? Then check out the Exploding Helicopter podcast episode on Austin Powers In Goldmember. Find it on iTunes, YourListen, Acast, Stitcher, or Podomatic.