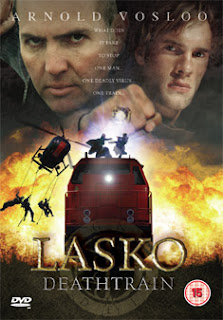 Monks have never been stars of the silver screen.

Mostly commonly sighted in historical dramas, they act as a kind of period window dressing – generally portrayed as stout, jolly fellows, whose love of God is only matched by their love of mead.

True, Asian martial arts films in the 70s and 80s often featured monks of the Shaolin variety, kicking god-fearing ass while dispensing cryptic wisdom (usually with a badly-dubbed English accent). But in Europe, monks have only ever had a marginal presence – the only notable contribution being period murder mystery, The Name Of The Rose.

So, it’s against this unpromising backdrop that we come to Lasko: Death Train (2007), a film which bravely smashes the stone tablets of convention and preaches a new gospel: a ‘monk cinema’ for the 21st century. Say it loud: I’m a monk and I’m proud.

Naturally, though, our hero – Lasko (Mathis Landwehr) – isn’t just any old monk: that would be boring. Our man is a member of a secret order of deity botherers - known as the ’Fist of God’ - who are dedicated to protecting the church.

Just as well, really. Because, while accompanying a train-full of pilgrims on a trip to see the Pope, Lasko only finds himself caught up in a plot of international intrigue after terrorists steal a deadly virus.

Attempting to make a covert getaway after their theft, the terrorists - led by Arnold Vosloo - hitch a ride on the pilgrim train disguised as monks and nuns. However, when their plan is discovered it’s up to Lasko to stop Vosloo before he can release the virus.

Now, you might think a monk trying to stop terrorists poisoning a train full of nuns and priests sounds like a disastrous cocktail. But while these ingredients really shouldn’t gel together, the film – in some crazy, mixed up way – works. Proof, if ever you needed it, that God does indeed work in mysterious ways.

Fittingly for a member of a secret sect called the Fist of God, Lasko is a supernaturally good martial artist, and you’ll be unsurprised to hear he’s given bountiful opportunities to demonstrate his face-pummelling prowess as he tries to foil the terrorist plot. 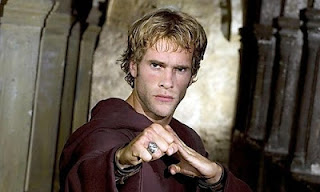 This though, presents a problem: how to reconcile Lasko’s devout religious faith with the need to get biblical on villainous ass? Fortunately the scriptwriters, aware of this contradiction – and showing no little knowledge of the Catholic Church’s stance on confession and absolution – permit Lasko to briefly regret each life he takes by making the sign of the cross over the body while looking mournfully into the middle distance.

So, to recap: meet baddie, punch baddie repeatedly till face resembles a tenderised steak, snap baddie’s neck like it was a cheese-stick, stand over corpse and look a bit guilty for a second. Are we all up to speed? Good. On such logic are the great religions of the world built.

Director Diethard Kuster craftily takes the opportunity to run with various religious motifs throughout the film. So when Lasko has to dispense a vaccine for the lethal virus amongst the passengers, he administers it via holy wafers. Not so much the body of Christ, as the anti-bodies.

Despite the bonkers premise, Lasko: Death Train is a thoroughly entertaining film. As Lasko, Mathis Landwehr has got good martial arts chops and the fights are excitingly choreographed. Appropriately for a train-set thriller, the whole thing rattles along enjoyably, building up a satisfying head of steam courtesy of a director who keeps the story on track throughout.

Of course, as fun as this film is, I wouldn’t be telling you about it unless it contained an exploding helicopter or, in this case, two.

The first comes when the police attempt to stop Vosloo escaping with the virus. They order in a helicopter full of commandos to storm and seize the train. As the chopper hovers above the moving carriages, the brave commandos slide down ropes to try and get onboard. 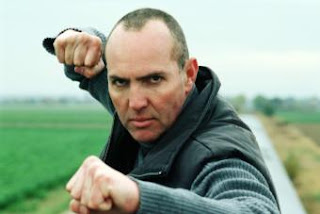 Unfortunately, the villains are prepared for this eventuality and have sneakily brought along a rocket launcher as carry-on luggage for their journey. One of the baddies leans out a carriage window and fires a missile at the chopper. There’s no time for the pilot to take evasive action and the helicopter explodes in a huge fireball.

The second moment of chopper carnage happens near the end of the film. In order to make his escape, Vosloo whistles up his own helicopter to whisk him off the roof of the train and to safety.

Naturally, Lasko isn’t going to allow this, so after also clambering up onto the train’s roof the pair proceed to have their long awaited showdown.

Unsurprisingly, Lasko prevails in the fight leaving Vosloo (the scoundrel!) to resort to dirty tricks. He pulls out a pistol – rather begging the question why he didn’t do this earlier – to shoot our hero. But Vosloo’s aim is inexplicably bad and, in attempting to kill Lasko, he succeeds only in haplessly shooting the pilot of the chopper hovering nearby.

Vosloo leaps onto the rope ladder dangling from the chopper, in the expectation that he’ll be flown away. But the mortally wounded pilot can only manage to dimwittedly steer the chopper into the path of the onrushing train. Ka-boom.

These are two absolutely first class chopper fireballs. There really isn’t anything like watching the real thing, and here the extravagantly huge explosions are clearly executed using pyrotechnics and without the use of CGI.

The second fireball is especially praiseworthy as we get to watch the train plough into the helicopter and, moments later, its debris. Lasko: Death Train was nominated for best action in a foreign film at the Taurus World Stunt Awards and it’s not hard to see why.

While the quality of the helicopter explosions are beyond dispute, they’re not particularly innovative. Chopper destroyed by rocket launcher is a routine method of destruction and, though rare, we’ve seen helicopters destroyed by trains before, most notably in Blue Thunder.

At least two commandos survive the first exploding helicopter. Realising that the chopper they’re dangling from is about to be destroyed, a couple of the quicker-thinking soldiers jump from their ropes. Two of them can clearly be seen in a later shot examining the helicopter’s wreckage. 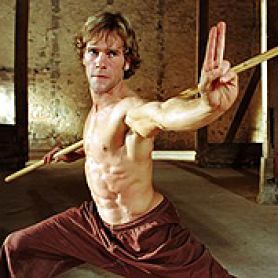 Some comic relief is provided courtesy of two pilgrims travelling on the train – one blind and one with gout – who remain oblivious to the drama unfolding around them through a series of escalating coincidences.

The pair bring to mind the great double act of Caldicott and Charters from Hitchcock’s own train-based thriller, The Lady Vanishes. In that film, despite the murder and kidnapping taking place around them, the duo are amusingly only concerned with getting back to London in time for a cricket match.

While not in that league, the pair here do entertainingly compliment the main story.

Unfortunately, director Diethard Kuster decides to use the film’s opening sequence to prove he’s completed a correspondence course in editing from the Michael Bay School of Retina Damage.

This renders the first action set-piece – the theft of the virus from a Government facility – into a dizzying, whirling, jumble of epilepsy-inducing edits.

The effect is compounded by Kuster’s love of showing the same event taking place from multiple camera angles. It creates a kind of Groundhog Day feeling, where you begin to feel you’re trapped in a permanent loop of the same events.

Thankfully, it looks like Kuster exhausted even himself with this initial effort and he reins in the technique a little for the rest of the film.

“Look I joined a monastery. I didn’t think I was joining a paramilitary organisation.”